Let’s talk Gender – from local to national, on and offline!

GIZ Colombia and APC (Presidential Office for int. Cooperation) launched their gender publication and participated in an international campaign for Women in Rural areas of Latin America 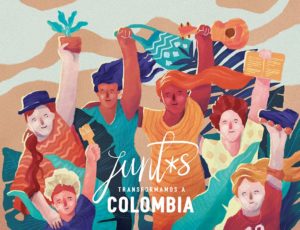 From the fifteen stories that brought to life the publication Junt*s transformamos Colombia (Engl.: Together we transform Colombia) four protagonists travelled a long way from their villages to give their testimony during the book launch in the capital of Bogotá. Shirley Dayanna is a trainer for Sports with principles, Nubia Yandé and Nelly Valencia are fighting for women’s rights in their indigenous community and Mariela Azudel created a small business with other displaced women in a new village that they call home now.

Accompanied by a big portion of creativity, their personal stories were interpreted by an improvisation theatre group that acted playfully and interactively with a touched audience of around 80 people. The political partner of GIZ, APC Colombia, supported the publication and hosted the event in their installations and with more than a thousand viewers via their Facebook Page. The closure was held by the Presidential Advisor for Women’s Equity, Gheidy Marisela Gallo Santos, underlining the importance of an integrated gender focus in a post conflict country like Colombia (50% of the more than 7 million victims that caused the armed conflict are women), and therefore for our future cooperation.

To take life decisions independently by having your own money or land title are essential elements for rural economic development. Unfortunately, the reality for women in rural areas demonstrates a very different situation. The access to land titles, resources and institutional support are rare. In addition, women spend traditionally more time on so-called unpaid domestic work. As a result, women have on average lower income, and are most affected by poverty (40,5% of rural women in Colombia).

Answering this situation, during the first half of October the Food & Agriculture Organization (FAO) launched the campaign #juntoalasmujeresrurales to make more visible the necessities of women in the rural regions of Latin America. The gender group of GIZ Colombia posted the stories and videos of Junt*s transformamos Colombia in their social media channels with another great success.