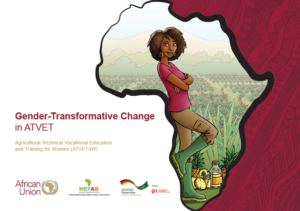 Women are the backbone of Africa’s agricultural sector. How many times have you heard this phrase? Over and over, experts have highlighted the importance of women in the agricultural workforce and in rural development. Too often, words have failed to translate into action. If development projects, especially those with a focus on agriculture and training, fail to focus on women, the continent’s agricultural and economic transformation agenda will not succeed.

The Agricultural Technical Vocational Education and Training for Women (ATVET4W) project is implemented by the African Union Development Agency (AUDA-NEPAD) in six countries: Benin, Burkina Faso, Ghana, Kenya, Malawi and Togo. The ATVET4W project is being technically and financially supported by Deutsche Gesellschaft für Internationale Zusammenarbeit (GIZ) GmbH through its steering base in South Africa, the home of AUDA-NEPAD.

Within GIZ, ATVET4W is the only GG2 project in agriculture and TVET. Since the project’s inception, the GIZ technical team has been working on defining what this mandate means. For us, it means that we strive to be gender-transformative to achieve gender equality and women’s empowerment. This mandate is clearly outlined in BMZ’s Development Policy Action Plan on Gender Equality 2016 – 2020 (Gender Action Plan = GAP II):

ATVET4W aims to increase women’s access to ATVET systems (formal, non-formal and informal competency-based training along selected agricultural value chains). However, the project takes it a step further. For women to be truly empowered, it is not enough to increase women’s access to skills development. Women need to benefit from the training – for example, through increased income – and they also need decision-making power over this new income. Rather than only measuring how many women have been trained, ATVET4W questions established norms and gender stereotypes to dismantle existing structural inequalities, as outlined in GAP II. One example is the “Women in the Driving Seat” tractor training initiative in Ghana that seeks to open access for women in traditionally male-dominated areas like mechanised agriculture.

Our new booklet on “Gender-Transformative Change in ATVET” highlights our journey towards women’s empowerment. Since 2017, the ATVET4W project has been working both on a conceptual framework and on practical examples of gender-transformative approaches.