Gender-specific violence against women is still very widespread in the Andean region and Paraguay. Estimates show that between 30 and 50% of women in Bolivia, Peru and Ecuador are subjected to physical violence by their partners (WHO 2010).

The countries of the Andean region and Paraguay have committed themselves to preventing, combating and punishing violence against women. They have also ratified major international agreements and put in place laws on protection from violence and action plans to tackle gender-specific violence. However, the limited exchange of information and experience between countries and the lack of dialogue between public, non-governmental and private-sector stakeholders make it difficult to implement existing laws and action plans. Therefore, the project “Combating violence against women in Peru, Ecuador, Bolivia and Paraguay” (Overall term: 2009 to 2016, Executive Project Manager: Christine Brendel) supports these countries and their efforts, aiming at enhancing cooperation between public, non-governmental and private-sector stakeholders in the region to work with one another to implement measures to combat violence against women.

If you are interested in learning more about combating violence against women in Latin America, please access the following links:

Link to the catalogue:

Link to the digital library: 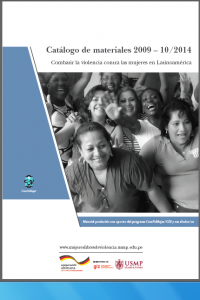