The soundtrack to gender equality – listen to Les Amazones d’Afrique

Article retrieved from the Guardian, 20 February 2017 ‘The Album is a love letter to men’

‘We are sick of seeing women suffer because of violence,” says Pamela Badjogo, Afro-jazz and blues singer. “In the family, in the war zones. We want it to stop.” 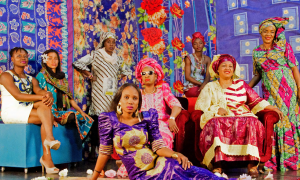 Badjogo is a member of the supergroup Les Amazones d’Afrique, an all-female collective of west African musicians campaigning for gender equality. It might seem a worthy premise on which to build a powerful creative expression but their album République Amazone blends ancient rhythms seamlessly over funk and blues with dabs of dub. Tracks are sang intermittently in English, French and Mandinka, and tackle love, oppression and female empowerment. These 12 musicians and singers, among them Grammy-winning Angélique Kidjo, Mariam Doumbia of the legendary duo Amadou and Mariam, and international popstar Nneka, believe music can trigger change and be a weapon to address the systematic disempowerment of women across Africa.

The project itself began with just three Malian singers: Oumou Sangaré, Mamani Keïta and Doumbia. These towering, glamorous presences, well-known on the world music scene, spent time with Valerie Malot (of French music agency 3D Family) in Bamako, the capital of Mali, in 2014. She became their de facto manager. “I saw how beautiful their lives were – with their perfume, fashion, music and divination, and I found myself connecting more and more with them,” says Malot. The conversations they had around gender led to some big realisations. “What we found out was that female repression in the continent and in the world, is something that touches every woman. It’s not a question of colour, or culture. It’s something generic. All women can relate to it.”

While Sangaré (who would decide not to continue working on the project) had experienced polygamy and forced marriage, Keïta had spent many years in Paris struggling as a female musician. After Malot proposed the idea, they decided to come together to help support and raise money for the Panzi Foundation, which has treated more than 85,000 girls and women with gynaecological injuries in the Democratic Republic of Congo, over half of whom were survivors of sexual violence.

And so Les Amazones d’Afrique were born; their name a homage both to the Dahomey Amazons, women warriors who roamed modern-day Benin for the better part of 200 years, protecting west African borders, and the first all-female pop music group in Guinea, Les Amazones de Guinée. “The only way to build a group like this is to build it around a cause, an idea,” says Malot. “We want to stop violence against women not only in the African continent but also in the rest of the world.”

It wasn’t all plain sailing. Although Malot says that casting the singers was “kind of magical”, when it came to finding an all-female band to record with, things stalled. “There weren’t enough female solo guitarists and drummers out there. There were big disappointments,” she says. They had to abandon plans to produce the album entirely with women, but with the help of Mouneïssa Tandina (Mali’s only prominent female drummer), alongside guitarist Mamadou Diakité and producer Liam Farrell (Doctor L), eventually they were successful in completing the final line-up, which now stands at Keïta, Doumbia, Kidjo, Nneka, Tandina and Badjogo, along with Kandia Kouyaté, Inna Modja, Rokia Koné, Mariam Koné and Massan Coulibaly.

Les Amazones d’Afrique performed their first, high-energy concert at Fiesta des Suds in Marseille in October 2015, and celebrated the release of their first single, I Play the Kora, last summer. Its message, in bringing together women to sing about why they should “rise up and fight injustice because we’re all equal”, was immediately powerful; the kora, a harp-like instrument native to west Africa, has been denied to female musicians for years – only men were allowed the prestige of playing it.

Republique Amazone is the sound of the African diaspora returning home, a reclaiming outside of genre and time. Les Amazones d’Afrique as an outfit slot into a long tradition of west African female empowerment that extends beyond music. Women such as Adelaide Smith Casely Hayford, known as the “African Victorian feminist” who set up a school for girls in Freetown, Sierra Leone; and Margaret Ekpo, Funmilayo Ransome-Kuti and Gambo Sawaba, the unsung heroines of Nigeria’s 20th-century independence and emancipation movement, who were as important to the cause of women’s rights there as the Suffragettes were in Britain.

To overcome violence against women in the countries they grew up in, Les Amazones know that the patriarchy, the dominance of men in society, must be dismantled. They have learnt a lot from each other over the past year, especially after an intense summer on the road. Nneka, the 36-year-old Nigerian singer-songwriter, says it was the first time she had worked with musicians when they had all put their egos aside. “I have personally had my own fair share of abuse and domestic violence. Hence I felt that connection to these women and to the project,” she explains. “You are there with people who are talented, who have something to say. Who you can listen to, who you can learn from. Most of them are older women who have had so much impact on their society, or on their hometowns. Just looking at that, it definitely inspired me. It gave me hope as well: I’m not out there alone. ‘It’s OK. Nneka you too can work, you can be a strong woman, yet you can also be a family woman.’”Inna Modja, a 32-year-old Malian-French singer, has spoken about how she and Nneka helped to educate the older women in Les Amazones. “We bring something different, from our generation, which is more open than ever to the world. We grew up surrounded by different types of music,” she told Le Point Afrique magazine. As a collective, they might be voicing the rights of daughters, sisters and mothers, but the album is “a love letter to men, in fact,” says Malot. “Everyone is saying that, in their way: ‘We need you.’”

Republique Amazone is out on Real World records on 10 March