“Be the winner of GIZ Salone, with your programme’s perception of gender at workplace and in society!” 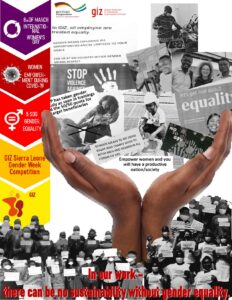 With this appeal, four GIZ Programmes and the GIZ Country Office in Sierra Leone have competed against each other. Over one week, the Programme Gender Focal Points have collected perceptions, ideas, practices and visions of their colleagues and created a gender corner. At the end of the GIZ Gender Week, the gender corners were presented to the entire Sierra Leone GIZ staff and evaluated by a jury.

The activity encouraged us as GIZ staff to think about gender equality while working with our target groups but also at our workplace. The gender corners remained at our offices a long time after the gender week and reminded colleagues, partners and visitors about our own contribution to a more equitable workplace and society.