How gender stereotypes are influenced by Kosovo’s education system?

Like previous years, the GIZ Kosovo Gender Group marked the Gender Week with two interesting events – this year with a special emphasis on reflection of gender stereotypes among the staff of GIZ Kosovo and a discussion about stereotypes in education textbooks used in Kosovar schools.

How gender stereotypes are influenced by Kosovo’s education system?

The second event dealt with the topic of gender stereotypes in education textbooks and started with the results of a recently undertaken study on secondary school textbooks. Following the results, panellists from Academia, the Kosovo Parents’ council, youth NGO’s and the Parliamentary commission for education discussed it and brought in their perspectives. The study as well as some other insights from the panel revealed some shocking facts related to the content of high school textbooks such as the statement in a psychology textbook for 11th graders: “Men’s brains are made to think and act, women’s brains are made to talk”.

The event was open to external guests and well attended by stakeholders from the education sector, such as school directors. Also among GIZ colleagues, the topic sparked interest, in particular among those having kids in school.
The event attendees agreed that this is an issue that affects everyone’s future and requires the reaction of parents, teachers, school directors, educational institutions and Civil Society. The results will be taken up by the GIZ project “Capacity development in Basic Education” and will be communicated towards the department for textbook revision in the Kosovar Ministry of Education. 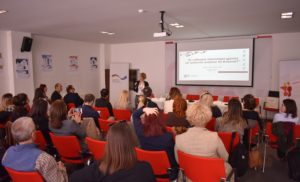 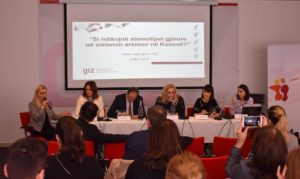