The High Commissioner of Water and Forest and Combating Desertification, Dr. Abdeladim Lhafi, will open the celebration. Afterwards, the word is given to six young and experienced women working in the forest sector: Some of them at the beginning of their career, some having climbed the institutional ladder. They will talk about their ambitions and about the crucial factors that helped them to succeed.

The forest administration has invited the German Ambassador, Mr. Volkmar Wenzel, to present a welcome word to the audience. The forest administration has been supported by the BMZ-financed GIZ – regional project Silva Mediterranea-CPMF – for 2 years to institutionalize gender equality in the internal human resource policy as well as in forest related activities. A medium-term gender program has been elaborated and implemented by GIZ and the official gender committee has been set up for that reason. 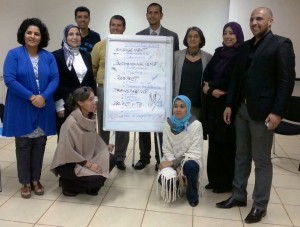 11 permanent members of the Gender Committee, all of them being officials of the Moroccan Forest Administration.

The Celebration which was chaired by the High Commissioner for Water, Forests and Combating Desertification was highlighting the forest administration’s continuous efforts to increase the number of female staff on all institutional levels and honoring the precious work of female forest staff.

Around 60 guests from regional forest units and the central administration were informed about the ongoing implementation of the medium term program “Institutionalization of Gender Equality in the Forest Administration”. The event was covered by the National TV channel “2M” and extracts broadcast in the evening news. The official character and the dissemination of information is one more step forward on the way towards more gender sensitivity in the Moroccan Forest Administration. More generally, it could well contribute to awareness raising in the intuitional and societal sphere in the country.