All GIZ staff in Tunisia is invited to watch a movie that has been part of pop culture in recent years. At the beginning of the evening a vote on the film will be held: “Crazy, Stupid, Love” – “Silver Linings Playbook” – “Vicky Christina Barcelona”.

After enjoying the chosen movie together, there will be a joint discussion chaired by an experienced moderator in the field of gender studies in Tunisia, followed by drinks and snacks.

GIZ staff in Tunisia was invited to watch the movie “Crazy Stupid Love” (a choice out of three movies, made by the public themselves). During the film participants were asked to raise their hands every time they spotted a movie scene where female or male stereotypes are promoted. Following the movie, the audience was invited to participate in a 45 minutes discussion about gender stereotypes in movies and their impact on our daily life. The arguments brought forward during this debate showed that there is a lot of sensibility amongst GIZ staff when it comes to gender issues, but also that opinions on certain aspects of gender equality vary. In any case, the responsive audience agreed that gender stays an important topic to be tackled on a regular basis. 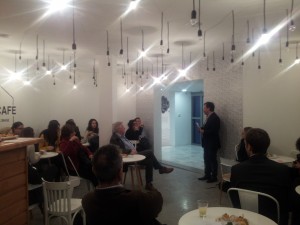