1. Promoting Gender Equality
In the 2018 Global Gender Gap Report Pakistan ranked 148 out of 149 countries, largely due to the low educational attainment and subsequent low economic participation and opportunities for women, as well at poor health and survival rates. In this context, women and girls from marginalized groups, such as refugees, are particularly disadvantaged. Pakistan is host to 1.4 million registered refugees, many of whom are second or third generation born in Pakistan, and with women and children comprising over 70% of the population. As part of its efforts to empower Afghan refugee youth in Pakistan, UNHCR implements the Albert Einstein German Academic Refugee Initiative (DAFI) scholarship programme, which has enabled more than 1,700 Afghan refugee youth to access higher education in Pakistan. However, low rates of female applicants for the DAFI scholarship programme, lack of access to the formal job market in Pakistan for Afghan refugees, and concomitant lack of professional experience remain challenges. The DAFI+ pilot aimed to address these three major challenges through different approaches in three components. DAFI+ was an initiative conceived by the GIZ Refugee Management Support Programme (RMSP) in collaboration with UNHCR Pakistan, to complement the DAFI scholarship programme. DAFI+ was piloted between November 2018 and April 2019, and as result of its success, RMSP will roll out a second phase from March 2020 to March 2021. 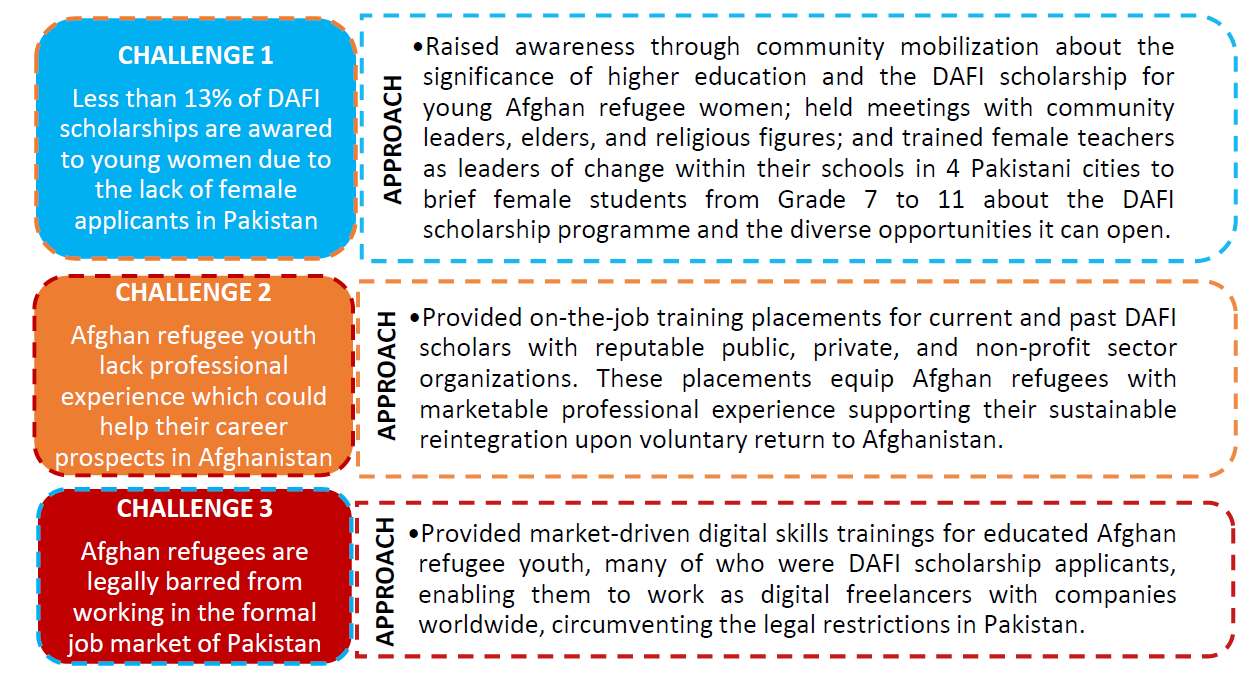 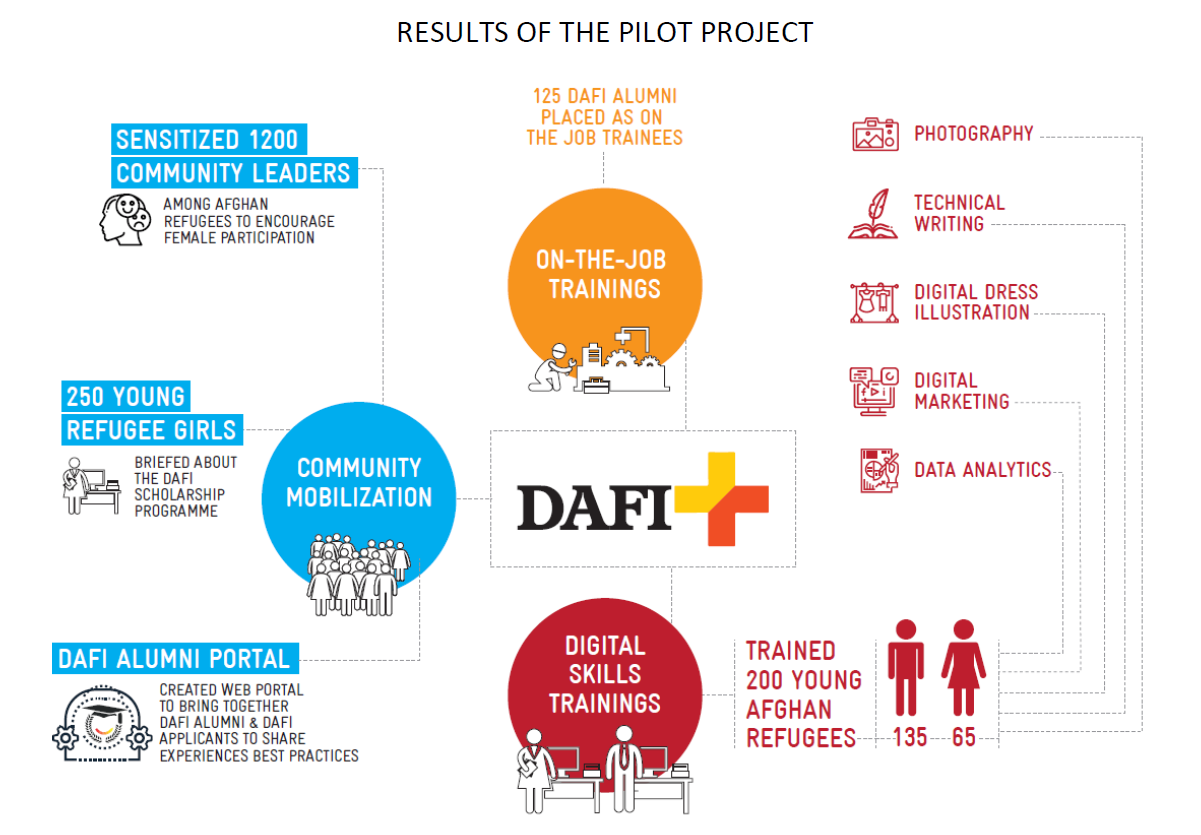 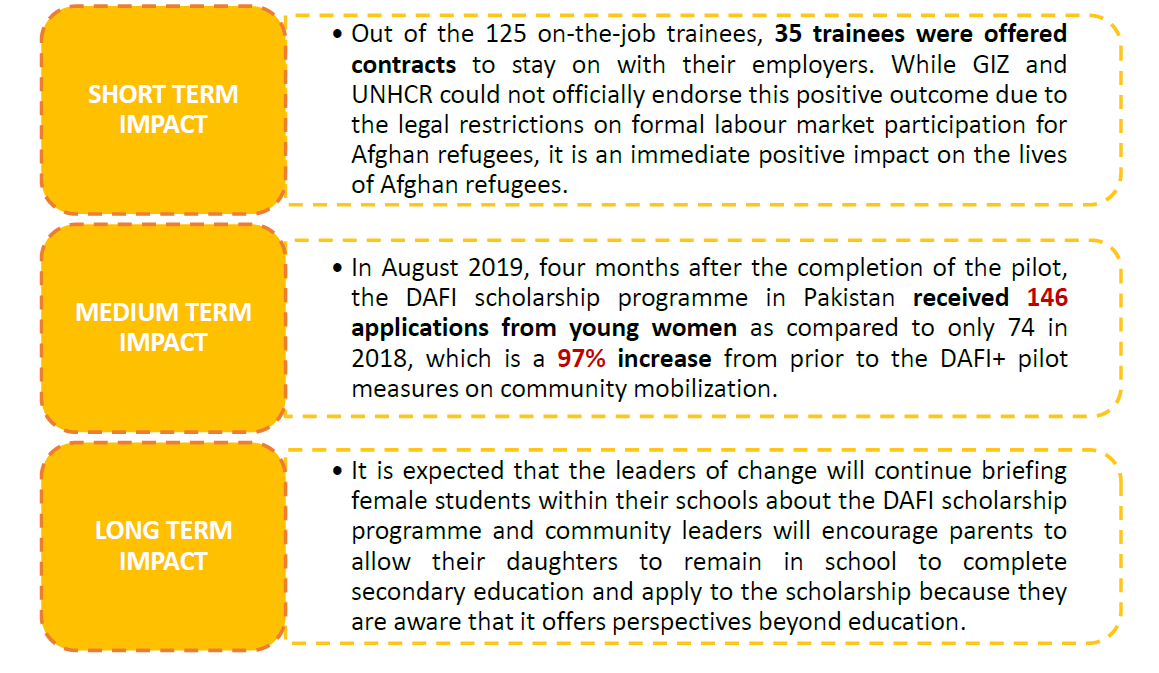 2. Gender as a Quality Feature of Our Work

The DAFI+ pilot initiative marked its completion on 18 April 2019 with a Social Networking Event at the National Incubation Centre in Islamabad
(think: buzzing and vibrant start-up environment). The event was attended by DAFI+ beneficiaries, representatives from GIZ, UNHCR, government
and implementing partners. This allowed for a direct exchange with- and feedback from Afghan refugee youth about their experiences with DAFI+
and the impact it has had on them. The testimonies from them were overwhelmingly positive – an example was a young woman who cited that she will impart the skills she learned
through the course to the girls in her community. 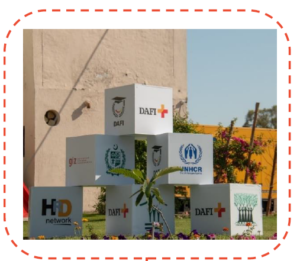 GIZ RMSP was invited to present the DAFI+ pilot initiative in an international conference, ‘The Other 1% – Refugees at
Institutions of Higher Education Worldwide’, organized by UNHCR, the German Federal Foreign Office (which is
RMSP’s commissioning party), the DAAD in Berlin on 18-19 June 2019. Following RMSP’s presentation of lessons
learned and good practices identified during the DAFI+ pilot, a participant from UNHCR Senegal expressed a wish
to replicate the initiative. To this end, two conference calls were arranged to present DAFI+; first to refugee students
in Senegal, and then to UNHCR Education Officers in Ghana, Mali, Guinea-Bissau, Ivory Coast, and Senegal. 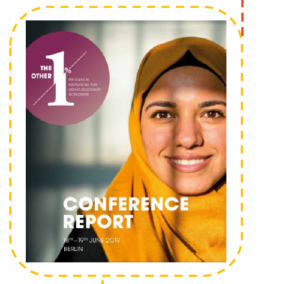 Furthermore, on 30 August 2019, UNHCR published, ‘Stepping Up – Refugee Education in Crisis’ in which it
mentioned the DAFI+ initiative, as contributing to breaking down barriers in the transition from higher education to
entry into the labour market, and the importance of enabling more young women to access higher education. The Chief
Commissioner for Afghan Refugees, who is RMSP’s direct government counterpart in Pakistan, has also expressed his
appreciation for the work RMSP does in supporting women to gain access to livelihood opportunities in all its activities. 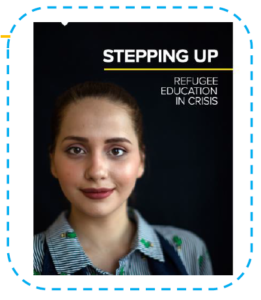 The contribution to enhancing gender equality among educated Afghan refugee youth in Pakistan has been captured in two short
documentaries, an animated presentation, and a fact sheet, which have been shared with the main stakeholders. Key
achievement indicators in the design of the DAFI+ concept included increased female participation in the DAFI scholarship
programme, which would lead to enhanced gender equality. RMSP’s implementing partners set up monitoring mechanisms
in line with the the DAFI+ concept, and these were overseen by an RMSP technical advisor. A follow-up survey about the impact
of DAFI+ on beneficiaries’ lives is planned for January 2020.

Thanks to the close working relationship between RMSP and UNHCR Pakistan, DAFI+ was conceived jointly to respond to
the challenges outlined. In order to ensure that the relevant authorities have no objections, RMSP reached out to the
Heads of the Chambers of Commerce, which have all the private sector companies registered, to seek their opinion and
consent for the placements component. The main political counterpart was kept informed to ensure he is on board with
the initiative. The three components were implemented by three local NGOs: Human Resource Development Network,
Inspire Pakistan, and Women Empowerment Organization.

One major challenge was the time constraint of the pilot, which is why, for the next phase, one
year rather than six months has been allocated to the activity. Another major challenge relates
to the realities on the ground when it comes to inclusion of girls in secondary and higher
education. We had to accept that lack of awareness about DAFI is not the only obstacle to be
overcome to increase the number of female applicants – there are underlying issues such as
poverty, and social and cultural norms, which are beyond the scope of DAFI+. However, all
partners were united in their efforts to enhance gender equality, due to the focus on Afghan
refugee youth, many of whom are incredibly inspiring and resilient individuals.