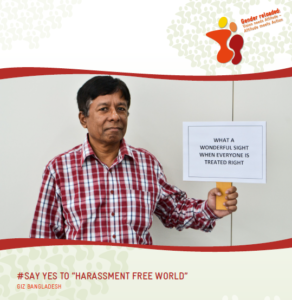 The Government of Bangladesh has ratified Convention on the Elimination of All Forms of Discrimination against Women (CEDAW) 1979 and adopted the National Women Development Policy 2011. To achieve gender equality and gender competence within GIZ Bangladesh (GIZ BD) established the Gender Working Group (GWG) task force in 2011. The GWG has been playing an active role in mainstreaming gender within the company. One key outcome of its advocacy efforts has been the enactment of the Sexual Harassment Redressal Policy (SHRP) in 2015 with the support of the national personnel Staff Representative Committee (SRC) and Human Resource (HR) Unit.

The SHRP was enacted in March 2015 in line with GIZ’s relevant policy, codes of conduct, gender strategy, the Bangladesh High Court Ruling 2009 and labour laws regarding addressing sexual harassment at the workplace. It was followed by forming a Sexual Harassment Redressal Committee (SHRC) comprising of five members. The policy and procedures have been developed in consultation with a senior legal expert, and with extensive inputs from the GIZ BD GWG, the SRC, HR and GIZ management. This policy, available in Bangla and English, is to be reviewed every five years or based on changes in national legislations and policies. The Sexual Harassment Redressal Committee is chaired by an external Ombudsperson, to ensure neutrality and independence of the committee. The current Ombudsperson, an expert on gender issues and legal matters, reports directly to the Country Director. Other committee members include chair and member from the GWG and head of HR. There is an option to induct another external member, based on need of expertise. GIZ BD GWG disseminates this policy to its new employees in the monthly staff orientation as well as at the introductory course organised by HR. It is also included in the national employee handbook for GIZ BD. The GWG has organised events for raising employee awareness on gender discrimination and against genderbased- violence issues i.e. during GIZ’s Gender Week and Sixteen Days of Activism Against Gender Based Violence. The GWG has also been actively involved in advising the management on gender-based policy matters etc.

Since the enactment of SHRP there have been approximately 45 monthly orientation sessions and around 8 annual introductory sessions on the policy. The employees have generally shown great interest to know about this policy and have often shared their views and suggestions, which will be incorporated in the reviewed policy. All GIZ BD employees are provided the SHRC Ombudsperson’s contact number so that in case of grievances they can directly contact her. The policy has enhanced the awareness level of the GIZ BD employees and is helping us make good progress in our way towards achieving a Harassment Free World in GIZ Bangladesh.