Laos: Promotion of Gender Equality through the engagement with the Green Climate Fund

Context
Lao PDR is a landlocked, Least Developed Country
with dwindling forest cover, from 70% in the 1960s
to 58% in 2015. Forests are not only an important
sector for Laos´ national economy, but are also
central to the income, nutrition and livelihoods of its
people. Especially the poor rural population is
strongly dependent on the natural resources derived
from land and forests. Forest degradation and
deforestation therefore pose a significant risk to the
livelihoods of a majority of the Lao population.
Women, the poor, and geographically remote
communities are typically most vulnerable to these
changes due to their limited adaptation capacities
and limited access to alternative means of securing
their livelihoods.
Lao PDR has embraced Reducing Emissions from
Deforestation and forest Degradation (REDD+) to
improve the quality and extent of forests nationwide
to provide economic, social and environmental
benefits and in recent years it has progressed
substantially towards REDD+ Readiness. GIZ program
Climate Protection through Avoided Deforestation
(CliPAD), commissioned by BMZ, has supported the
Lao Government since 2009 on their REDD+
Readiness Process on a national and sub-national
level. An essential part of the project is to support
local communities in learning to apply sustainable
practices of natural resources management and in
identifying alternative sources of income, with an
emphasis on Gender Equality. 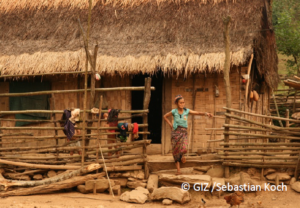 Since 2015 CliPAD has also supported the
Government of Lao PDR in getting access to climate
finance. The project developed a funding proposal to
the Green Climate Fund with the program title
“Implementation of the Lao PDR Emission
Reductions Program through improved governance
and sustainable forest landscape management” to
finance the implementation of six Provincial REDD+
Action Plans being developed under six province
Emission Reduction (ER) Program. Another GCF
activity supported by CliPAD is the implementation
of the GCF Readiness Program for the GCF
accreditation of the Environment Protection Fund
(EPF) (see Box 1.).

Box 1.: About GCF Funding Proposal and GCF
Readiness Support
GCF Funding Proposal: Project 1 of the GCF-GIZ program was
accepted by the GCF Board November 13th, 2019. The
program will contribute to the implementation of the
national ER Program from Lao PDR. With approximately
250,000 direct beneficiaries from at least 23 different ethnic
groups, and an additional 250,000 women and men indirectly
benefitting, the ER Program aims to mainstream Gender and
ethnic sensitivity throughout all planned measures. The GIZGCF
program aims to support the successful implementation
of the ER Program through improved governance and
sustainable forest landscape management. GCF Readiness
Support: As one of the Executing Entities of the GIZ-GCF
program the EPF will channel the GCF grant resources to
target beneficiaries and will also be the distribution channel
for the Forest Protection Fund results-based payments and
other sources of REDD+ finance. Additionally, the EPF aspires
to become the first GCF Direct Access Entity of Laos and
submitted the application to the GCF in October 2019. In this
context, the EPF has been part of the GCF Readiness Support
Program with GIZ as the Executing Entity since April 2018.

In this respect, new efforts on the promotion of
Gender Equality have been made to guarantee a
gender-sensitive implementation of upcoming
activities. This included the development of a Gender
Assessment and Action Plan in the frame of the
development of the Funding Proposal for the GCFGIZ
program and support of the EPF in updating and
further developing their Gender policies for the GCF
accreditation process. The GCF represents in this context an opportunity in Laos to further promote
Gender Equality in a sustainable way at a local and national level.

Promotion of Gender Equality at a local and national level

In order to secure a gender-sensitive
implementation of the GCF-GIZ program at a local
level and to meet the standard requirements of the
GCF and GIZ, a Gender Assessment was carried out
during the development of the Funding Proposal.
The Gender Assessment which provided
recommendations for the Funding Proposal handed
in is complemented through a Gender Action Plan
(GAP) which represents the basis for operationalizing
the results and recommendations of the Gender
Assessment. The GAP was developed to promote
opportunities, drivers of change and positive gender
dynamics as well as to manage and mitigate
potential adverse risks over the duration of the
program.
At a national level Gender Equality is being promoted
through the support of the Environment Protection
Fund to get accredited to the GCF in the frame of the
GCF Readiness Support. The support included the
development of a new Gender strategy for the EPF
together with a Gender consultant. During the
period of April to September 2019, the EPF got
support to upgrade and harmonize some of its key
policies and Project Operational Manuals (POM) to
meet international donors’ standards including the
GCF Gender Guidelines. During this period trainings
and training materials on Gender and Environment
and Social Safeguards were provided to the EPF. In
this context, the updated POMs and a new EPF
Summary Policy on Gender and Social Inclusion are
expected to be adopted by the Board of Directors of
the EPF in 2020. With the adoption it is expected that
the new standards are implemented throughout the
whole project cycle and within the Fund.
The efforts on the promotion of Gender Equality
under the support of CliPAD did not first started with

the engagement with the GCF. Efforts were made
through the implementation of the past phases of
CliPAD and have become an integral part of the
project indicators. In the 4th phase of CliPAD (CliPAD
IV), which is aligned with the GIZ-GCF program, the
participation of at least 20% of women as members
of the Provincial and District Project Management
Units in the provinces of Houaphan, Luang Prabang
and Sayabouri will be secured in the output “Sub-
National ER Program”. In the past it has been
showed that at a local level for example in the village
forest management planning meetings in Houaphan,
between 14 to 401 Percent of women participated.
Moreover, through mainstreaming efforts it is
ensured that women benefit equally from the
knowledge of new introduced sustainable practices
of natural resource management.

In all the aforementioned initiatives the promotion
of Gender Equality can be found in the Monitoring
and Evaluation (M&E) systems. Through the
inclusion of women participation in indicators in
CliPAD IV, the further inclusion of women in decision
making will be monitored and guaranteed. The
implementation of the GAP and aggregation and
dissemination of knowledge in the GCF-GIZ program
areas and nationwide will be secured through output
1 (Activity 1.7 “Knowledge management, FPIC,

safeguards and gender”). Within the support of the
EPF, Gender was mainstreamed through the
different Operational Manuals including M&E.
Moreover, the EPF started to record efforts on
promotion of Gender by writing down case studies,
with the support of a Gender consultant.

Promoting Gender Equality together with the
Environment Protection Fund (EPF)

By supporting our partners, such as the EPF in
developing their new Gender Strategy aligned with
GCF Guidelines, we contributed together to further
support the inclusion of women across project
implementation and within their organization. The
EPF staff has shown great ownership regarding the
promotion of Gender Equality, which was reflected
during the process of the development and
presentation of the new Gender strategy.
During this period, it was demonstrated that their
understanding, commitment and experience will
lead them to a successful and sustainable
implementation of the new Gender strategy, which
will contribute to further guarantee equal
opportunities for men and women in Lao PDR.

Their understanding on the importance of Gender
Equality as a mean for development reflects their personal interests to improve Gender issues within
their organization and field of work.

Box 2.: Promotion of Gender Equality in LENS2
Second Lao Environment and Social Project (LENS2)
Subproject: Community-Based Management of Phou Meud –
Phou San Kheuan Provincial Protected Area (PMPSK-PPA) of
Vientiane Province.
Donor: World Bank.
Location of Project: Vientiane Province.
This sub-project includes “village banks” were primary users
and beneficiaries are women. Gender mainstreaming is
considered during the planning and implementation of the
subproject activities. Efforts are made to ensure that at least
20% of participants from villages, districts, and/or province
are women. The subproject provides high priority for
qualified women participants for trainings, study visits,
meetings, land use planning, awareness raising, and
livelihood improvement and the actual female participation
ratio will be put in record. It is also ensured that at least 30%
of Village Committee Members and 40% of attended villagers
are women.

Moreover, through the addition of the task of the
EPF Safeguard Officer to ensure the mainstream of
the new EPF Summary Policy on Gender and Social
Inclusion through the project cycle shows the
commitment of the EPF in fully include the updates
within their project management operations.
Lastly, the experience gained by the EPF in the past
in promoting Gender Equality in their project
implementation by including Gender principles in
their Project Implementation Manuals and
integrating Gender in their Environmental and Social
Management Framework sets a strong basis for the
future implementation of the updated manuals (see
Box 2.).
Overall, the engagement with the GCF has
demonstrated that there is a great potential in the
promotion of Gender Equality under the ongoing
support of GIZ. CliPAD IV and the efforts that have
been made to include women in decision making
activities are examples of the first actions taken. The
development of the Gender Action Plan under the
GIZ-GCF program and the new Gender strategy of
the EPF characterize the next steps that will be taken
and shown the importance of continuing promoting
Gender Equality in Lao PDR. 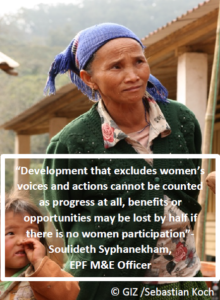