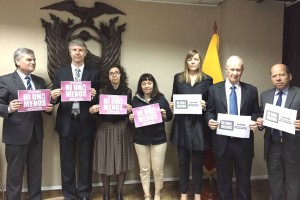 At first glance, the world of ombudsman institutions in Latin America is female: The majority of the staff is female and in almost all institutions, there is a specialized unit dealing with women’s rights.

Yet, this reality is different: While women submit a large majority of claims directed at the Ombudsman Offices across Latin America, only one third of the Ombudspersons are female. Moreover, almost 75% of the decision-making positions of these bodies are held by men. Very often, the human resource management in the Ombudsman institutions lacks designated mechanisms for the promotion of qualified women, and staff members regularly report a work climate that is hostile to the integration of gender-specific concerns.

To change this, the GIZ program for the strengthening of the Ibero-American Federation of Ombudsman Offices (PROFIO) conducted trainings targeted towards breaking down organizational barriers and putting an end to gender-based stereotypes and discrimination – breaking the class ceiling (“techo de cristal”). At the beginning of the project, none of the more than 100 human rights institutions in Latin America had a strategic work plan with a gender perspective, nor a gendered policy, nor a clear approach to gender mainstreaming.

In addition, monitoring resulted in the foreseen development of three further manuals. All studies and material developed are publicly available on the program website. Almost all the institutions have modified their registration systems and other protocols to be able to provide differentiated attention according to the different needs of men and women and other groups, such as LGBTI, indigenous peoples. Cooperation with the Ombudsman Office in Costa Rica has been particularly successful, as it resulted in the incorporation of an indicator on sexual harassment into the national indicator framework.

The full information can be downloaded. (in English)

The competition entry can be downloaded. (In Spanish)