Indonesia: Gender Issues are not a problem for us

Just recently, after discussing gender concepts in a meeting of young extension workers (penyuluh) in Malinau, North Kalimantan, a male member of the group wondered, why we had taken our time for talking about these issues. According to him, “gender issues are not a problem for us”. “Nevertheless”, replied another female member, “we should consider the topic more in detail, it is important”. The short episode is part of our story of achievements and challenges to gender equality that draws on the experience of mobilizing local partners to mitigate deforestation in Kalimantan.
During the last decades, Kalimantan’s forests have faced major losses. Large amounts of carbon stored in forest biomass and soils have been released and biodiversity has been lost as a result of forest con-version into monocrop plantations. The protection of the remaining primary forests (Fig. 1), the sus-tainable management of secondary forests, and the transformation of cash crop monocultures (e.g. oil palm, cocoa, rubber) into more environmentally friendly land-use systems, such as agroforestry, are therefore urgent matters. In this context, young women and men from Malinau have been supported through the GIZ FORCLIME programme to build up the organization “IPAMA” (Ikatan Penyuluh Agrofor-estry Malinau, which means “Union of Extension Workers for Agroforestry in Malinau”). IPAMA’s overall goal is to disseminate agroforestry concepts and methods in the Malinau district. 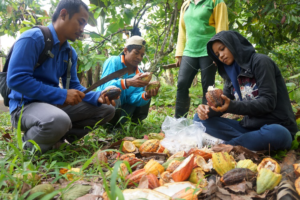 AGROFORESTRY AND GREEN ECONOMY
Agroforestry is a traditional land-use method applied worldwide that involves growing diverse plant species together in the same site. Agroforestry systems can provide effective carbon sinks in their above- and belowground biomass, manifold ecological niches for flora and fauna as well as important environmental services (e.g. soil formation, pest control) (see Jose 2009). Through the delivery of di-verse non-timber forest products (NTFPs), agroforestry can contribute to food security and livelihood development. Moreover, diversification in production and income allows the producers more inde-pendence from fluctuating market prices. Thus, agroforestry can increase the productive value of small-holder farmers’ land and prevent their transformation into less diverse cash crop plantations. Agrofor-estry can contribute to an “inclusive green economy” (UNEP 2015), which aims at improving human well-being and social equity, while reducing environmental risks and ecological scarcities. It is a pathway towards achieving the Sustainable Development Goals (SDGs) (e.g. poverty eradication, biodiversity conservation, climate protection).
With the Forests and Climate Change Programme (FORCLIME), Germany supports its Indonesian part-ners in developing pilot regions of sustainable forest management, agroforestry and green economy in Kalimantan. The support is based on multi-level institutional partnerships, advisory service, capacity building and mobilizing local extension services, such as IPAMA, which help farmers in implementing agroforestry systems by facilitating so-called “farmer field schools” (FAO 2016). Improving gender equality and equity in the predominantly men-staffed forestry and agroforestry sectors of Kalimantan is a transversal theme that runs through all project activities (Engelhardt & Rahmina 2011).

GRASSROOTS MOBILIZATION FOR PROMOTING AGROFORESTRY AND GREEN ECONOMY
The idea of developing IPAMA (for-malized in December 2016) arose as a consequence of several trainings in agroforestry concepts and methods organized for farmers and extension workers by FORCLIME and their part-ner institutions in Malinau (see Milz 2013, Milz et al. 2016). The extension workers, both women and men, were especially interested in learning to re-habilitate degraded or abandoned cocoa plantations – of which there are many in Malinau – and to transform them into productive gardens based on agroforestry principles, and without using any chemical fertilizers or pesticides. As a FORCLIME part-ner at local level, IPAMA now aims to share agroforestry knowledge with farmers and governmental institutions, such as KPH Malinau (Kesatuan Pengelolaan Hutan or Forest Management Unit). A further crucial goal of its activities is to increase the local economic value of agroforestry products (e.g. cocoa, coffee, fruits) through applying and optimizing processing techniques (e.g. fermentation) and home-industries. In cooperation with one local cocoa farmer, IPAMA has already started to cultivate, process and sell cocoa to a company that produces exclusive high-quality chocolate (Fig. 2). The group’s overall strategy for agroforestry and green economy, which is currently focused on but not restricted to cocoa, is shown in Fig. 3. 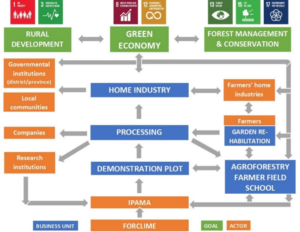 SUPPORTING GENDER EQUALITY THROUGH GRASSROOTS MOBILIZATION
At the moment, IPAMA has 11 active members (4 women, 7 men), while in the first meetings of organ-ization building much more male (80%) than female (20%) participants joined, and men were more active and dominant in discussions than women. In the course of the organization-building process, participatory methods encouraged the participants for open expression and collective learning. We ob-served that especially women’s participation and their self-confidence in discussions increased. Possi-bly, this dynamic was also stimulated by the fact that the main facilitator (first author of this article) was a woman. Moreover, the group accepted the facilitators’ suggestion to pay attention to the gender dimension and decided that the female members should hold at least 40% of the key positions (e.g. head, secretary). This decision was explicitly meant to improve women’s condition at the intra-organi-zational level. Now, after almost two years of working together, “gender equality in IPAMA is very good”, a female member said, explaining that “we do not distinguish our work in men’s work and women’s work, neither in the field nor in the organization”. This work context allows the members to conduct collective action in accordance with their skills, interests and availability, rather independent from traditional gender roles and without being hindered by gender-related power differences or dis-crimination. That is why the IPAMA members agree with the statement mentioned above that “gender issues are not a problem for us”. Gender-specific participation and the progress of activities are regu-larly documented and reported within FORCLIME. 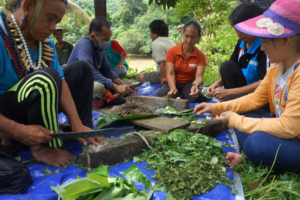 GENDER EQUALITY IN COLLECTIVE ACTION
Taking the example of IPAMA, we observed that a mixed group of female and male members is benefi-cial for balancing the internal social relationships and for ensuring continuity in the collective work. As most of the IPAMA members are involved in different labors, organizational activities are usually dis-tributed in a dynamic and flexible way. However, it is challenging at times, when most of the members are busy with other activities or away from Malinau. In such moments, it is especially the married women, who are less mobile due to caring duties at home and in the family, who secure the continuity of IPAMA activities. A gender-related challenge is thus to prevent the over-exploitation of the most active members, which are especially women. A monitoring system of work and benefit sharing that
Fig. 3: Strategy for agroforestry and green economy in Malinau recognizes additional working hours and responsibilities is currently being developed within IPAMA, and is meant to address the issue.
So far, more male farmers are joining the ag-roforestry farmer field schools conducted by FORCLIME in cooperation with IPAMA. One reason is that land and garden management are traditionally perceived as men’s work (Engelhardt & Rahmina 2011). However, ag-roforestry includes manifold activities from production to the marketing of products. To attract more women to join in our activities, we implemented entry points in our training program that address local women’s needs, interests and skills in accordance with their traditional gender roles. Such entry points were, for instance, the elaboration of organic pesticides by using aromatic plants (Fig. 4) and coffee processing. Once the female participants perceived themselves as important members of the farmer groups, we experienced that they were also interested in learning more about other, more men-domi-nated, activities (e.g. agroforestry management). We regularly evaluate, together with the participants and facilitators, our methods and outcomes in order to gradually adapt our training program to the local conditions. Female and male participation rates as well as training observations are regularly shared with our FORCLIME colleagues.

It is a challenge to achieve gender equality in the predominantly men-staffed (agro)forestry sector in North Kalimantan. However, we think that farmer field schools as participatory and communicative platforms for both, women and men, can be sustainable strategies to institutionalize more gender equality and equity at the local level. We consider a welcome atmosphere, attractive entry points for women and female trainers (such as those from IPAMA, who can serve as role models) to be key factors for mobilizing more women to join in our collective learning and action. The voices of the IPAMA mem-bers agreeing that “gender issues are not a problem for us” make us optimistic that we are on the right track. However, we shall not ignore the critical voices reminding us that gender equality and equity in our projects is work in progress.