The FORCLIME approach
FORCLIME’s approach is derived from the recognition that responsibilities, vulnerabilities
and decision-making powers of individuals and groups in relation to forestry and climate
change can be attributed to social structures based on characteristics such as gender,
ethnicity, place, health, sexual orientation and age. Different genders play different roles in
their societies and have different needs. They also have different access to public services
and, therefore, benefit differently from their projects. 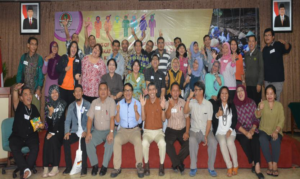 Gender in the Indonesian forestry sector
In Indonesia, it has been widely accepted
that forest understanding, knowledge and
management involve gender
differentiation. Thus, for example, it is
known that Indonesian women, especially
those who are highly dependent on natural
resources, have important roles in the
Indonesian forestry sector. They are
intensively engaged in managing
productive lands, forests, and other natural
resources. Women collect a variety of
forest products including food, medicinal
plants, firewood, and raw materials for
basket weaving or other domestic tools,
etc. Recognition of these genderdifferentiated knowledge and experience
as well as strategic roles in managing
forest resources can significantly
contribute to the development of policies
and actions on forest land-use and forest
resource management, which could avoid
deforestation and forest degradation.
However, the gender dimension in relation
to forest management has not yet been
fully recognized by forest-related policies
and programs.

Indonesia’s social forestry policies such as
Community-managed Forest (Hutan
Kemasyarakatan, HKm) and Village Forest
(Hutan Desa), which allow local
communities to manage state forest lands
and resources, have not yet adopted a
gender equality perspective. Responding
to the growing calls for gender
mainstreaming, the Ministry of
Environment and Forestry (MoEF) initiated
a process for gender mainstreaming in the
forestry sector and asked the GIZ
FORCLIME Program for technical
assistance. Gender mainstreaming in the
development context aims to improve the
quality of participation in and utilization of
development processes for both men,
women, and other marginalized groups. In
March 2014, the Gender Working Group of
the MoEF requested FORCLIME to
support the Ministry in several areas:

 to integrate gender mainstreaming into
MoEF’s Forestry Strategic Plan
(RENSTRA 2015-2019),
 in the development of a “Gender
Responsive Forestry and Climate
Change Program”,
 to revise a Ministerial Decree on the
“Guideline for Implementation of
Gender Mainstreaming”, and
 to implement and facilitate the
documentation of lessons learned from
gender mainstreaming pilot activities in
the FORCLIME demonstration areas in
Kalimantan.

How did we support gender mainstreaming?
FORCLIME used the conceptual
framework of the GIZ gender strategy
2010-2014 as a guideline for its support to
MoEF, addressing five strategic elements
to promote equal opportunities for all. The
five elements consist of: (1) political will
and accountability – the way in which
managers show their support for the issue
of gender equality and follow up its
implementation; (2) corporate culture –
patterns of behaviour and codes of
conduct within the organization that help
ensure gender equality; (3) gender
equality within the organization – synonym
for cooperation on equal terms and a
balanced ratio within the workforce; (4)
gender competence – how much staff
know about imbalance in gender relations
and ways of correcting these; and (5)
process adjustment – gender sensitive
design of all processes and instruments.
Based on the overall strategy and these
five elements, GIZ FORCLIME supported
the Gender Working Group at MoEF in the
inclusion of gender aspects into the
Ministry’s Strategic Plan (RENSTRA 2015-
2019) as well as in piloting the field
implementation. This included
establishment of demonstration activities
at sub-national levels and – in a strategic
partnership with the GIZ Strengthening
Women Rights project (GIZ SWR) –
leveraging SWR’s work with the Ministry of
Women and Empowerment (MoWE)
towards the forestry sector, using a
multilevel approach. 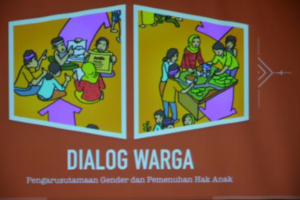 GIZ FORCLIME’s work is documented in
our products and is integral part of our
Results Based Monitoring system. The
qualitative surveys of the Most Significant
Change approach has been used to
document our activities, outcomes and
impacts.

What did we achieve so far?
1. Promoting gender-based capacity building measures for government officials and
other stakeholders such as NGOs and Women Farmers Groups: FORCLIME
supported the implementation of gender mainstreaming into the RENSTRA 2015-2019. In
total, 25 focal points at MoEF increased their capacities through participation in a Training of
Trainers (ToT) for gender mainstreaming supported by FORCLIME and MoEF’s Gender Task
Force. For instance, the focal points applied the newly acquired knowledge to program
planning and budgeting in 2015 and 2016. In addition, three focal points from two piloting
provinces of MoEF (East Sumba District in East Nusa Tenggara Province, and Agam District
in West Sumatra Province), as well as ten focal points from FORCLIME demonstration areas
had been trained.
2. Promoting the method of “Community Dialogue” (Dialog Warga) for gender
mainstreaming among government officials: FORCLIME supported MoEF and MoWE
on disseminating gender issues and Community Dialogue methodologies to 50 government
officials in in East Sumba District, to 30 officials in Agam District, and 30 officials in West
Sumatra Province. In addition, trainings on gender mainstreaming, Community Dialogue
methodology, and child protection awareness raising for 25 government officials were
supported in Berau District in East Kalimantan Province. In Malinau District (North Kalimantan
Province) 20 officials participated in a training on gender mainstreaming, Community
Dialogue methodology, child protection, and gender and climate change.
3. Raising awareness on gender mainstreaming among community members and
farmers groups: FORCLIME supported MoEF and MoWE to conduct trainings on gender
mainstreaming with 60 farmers (organized in farmers groups) in Sumba Timur District and
with 50 farmers from Agam District. Awareness raising on gender mainstreaming and child
protection was also facilitated with 50 farmers from Tepian Buah Village and 30 farmers from
Long Okeng Village in Berau District as well as 35 farmers in Setulang Village, Malinau
District. Besides GIZ’s conceptual framework on gender mainstreaming, the Community
Dialogue approach from GIZ Strengthening Women’s Rights project (GIZ SWR) was used.

4. Promoting the revision of gender mainstreaming-related policies: FORCLIME
supported the revision of the Ministerial Decree SK Menhut No.528/Menhut-II/Peg/2004
on the “Guideline for the Implementation of Gender Mainstreaming”. The final draft was
submitted to the Minister in 2014. The guideline poses the basis for an e-learning
syllabus, which is currently being developed jointly by MoWE, the MoEF Gender Working
Group, the Center for Forestry Education and Training (CFET) of MoEF, and FORCLIME.
In 2015, the revised guideline has already been applied at FORCLIME demonstration
sites in Kalimantan, implemented by the MoEF Gender Working Group and supported by
FORCLIME (technical and financial cooperation modules).
5. Mainstreaming gender analysis into CFET’s blended learning curricula: FORCLIME
supports CFET and MoEF’s regional forestry training centers to develop trainings for
“blended learning”, a combination of e-learning and classroom teaching. One of these
blended learning trainings will address the important issue of conflict mapping, which
encompasses seven modules that need to completed during an e-learning phase.
Gender analysis is one of these modules.
6. Training MoEF auditors in gender-responsive auditing: FORCLIME, together with
MoEF’s Gender Working Group, has trained at least 100 auditors from MoEF on gender,
gender mainstreaming, as well as gender responsive planning, budgeting and auditing.
The auditors will have the role to audit all units in MoEF on gender-based programs and
activities as outlined in the Ministry’s planning and budgeting. As gender-based auditing
will be mainstreamed in 2016, the performance of all units in the Ministry will be
measured against their gender-responsiveness. This auditing process will continue in
medium to long term as it is mandated in the legislation.
7. Indonesia’s position on gender equality in international forums: FORCLIME
supported its partners at MoEF, the COP signatories, during the process of formulating a
position on “climate change, forestry and gender” to be presented at COP 21 in Paris.
8. Challenges in cooperation and key success factors: the challenges are changes of
person in charge for the gender programme and different standards of operation
procedures of gender responsive planning and budgeting of the MoEF and GIZ’s. Key
success factors are: supportive enabling conditions, partners’ willingness and enthusiasm
and partnership approach.

What was our impact?
 Gender mainstreaming of national strategies: Through GIZ FORCLIME’s intervention,
the overall five-year national forestry strategic plan (RENSTRA) 2015-2019 was gendermainstreamed. MoEF allocated a gender responsive budget for 2014 of IDR
30,081,042,000.00 and budgeting for gender activities over the next five years will be
allocated as outlined in the RENSTRA.
 Ensuring Sustainability: To ensure the adherence of these plans FORCLIME, together
with the MoEF Working Group on Gender, trained over 100 auditors of the Inspection
Directorate on gender mainstreaming on how to audit the planning, budgeting and
implementation of activities. The gender based auditing has a legal basis and will be
implemented in 2016. All units in MoEF will thus be measured against their success in
integrating gender-responsive activities in their planning frameworks.
 Multiplier effect: Through FORCLIME’s gender-related activities 25 gender focal points
have been trained via the ToT approach, which extended the gender training towards 155
government officials and 215 farmers on field level. Additionally in a South-South
dialogue the lessons learned from gender mainstreaming in MoFE were shared with 50
participants of GIZ Brazil projects on the 22 July 2015.
 Acknowledgements beyond our collaboration: In a national competition among all
ministries, the MoEF submitted its work to the top award for implementing gender
mainstreaming in its planning documents and activities. As a result of the support and
collaboration, in 2016 MoEF is likely to move up to top performance in the annually
awarded national prize for “Gender Mainstreaming Classification”. Also, GIZ FORCLIME
won the first prize of the “GIZ Communicating Gender Award” in 2015 for GIZ Indonesia,
Timor Leste and ASEAN.

Please watch the video of the Ministry of Environment and Forestry to learn more about our
joint activities: https://www.youtube.com/watch?v=wP9Leh4kPyA
Submitted by Mohammad Rayan (FORCLIME) and Dr. Nadja Jacubowski (Gender focal
point Indonesia, Timor Leste and ASEAN).