Nepal: INCLUDE: Inclusive Development of the Economy Programme in Nepal

INCLUDE stands for the Inclusive Development of

the Economy Programme in Nepal. It contributes

to a socially balanced economic growth, by reaching

out to poor and ultra-poor inhabitants, who are or

could be economically active, in particular women,

affected people and people with disabilities.

In Nepal, the unequal power relations are not just

limited to men and women but also between different

castes and social groups.Therefore gender AND

social inclusion through economic development is

the core focus of all INCLUDE interventions.

Gender Equality and Social Inclusion (GESI) is a

between women and men and between different

social groups. It focuses on the need for action to

rights, opportunities and respect for all individuals

regardless of their social identity.

INCLUDE has developed mainstreaming guidelines

to help steer all decision making processes both

internally as well as within its partner organisations.

Basically three main aspects are followed in all decisions

of the INCLUDE management:

Working in a post-conflict context, the dono-

decisions are most important when selecting

are followed when identifying and selecting new

• Partner organisations are then guided towards a

together with the partners, areas for GESI

interventions are identified and implemented.

• Strengthening the partner organisations to continuously

embrace and live the GESI concept by

building their capacity to mainstream GESI in

their governance, strategy, processes and services.

INCLUDE has developed partner selection criteria in

• The composition of the executive committee and the

• GESI-friendly services to the members.

The most important GESI success factor in the

INCLUDE programme is its specific value chain approach.

The value chains of beekeeping, medicinal and

been chosen for their high inclusiveness relevance. An

2014) confirmed that these value chains are one of

the most accessible and profitable forms of employment

for women and disadvantaged groups in the remote area

of the programme districts.Till date, more than 7.500

a sustainable income as producers in one of these selected

A success story from the field: Airawati Multipurpose Cooperative 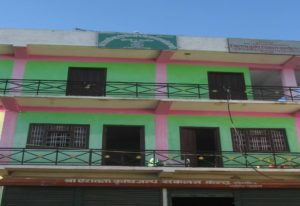 The Airawati Multipurpose Cooperative Private Limited (AMC) is a partner

cooperative of the INCLUDE programme in the Pyuthan district in Mid-

West Nepal. The cooperative is actively involved in the collection and sale

of Ginger, Turmeric, honey, MAPs, herbals and other agricultural products,

produced by its members. AMC also provides savings and credit facilities to

its members for micro enterprise development at the local level. The practice

of the cooperative in relation to GESI is highlighted below:

women and disadvantaged groups both economically as well as socially.

• Composition of the Executive committee and the members: The cooperative

52% belong to ethnic minorities. The executive committee consists of 11

members out of which 2 are women and 7 belong to ethnic minorities.

• Incentives: The cooperative was successful to grab a subsidized loan

and benefit sharing modality. The amount was used to mobilize the

community to create additional income and employment. Due to their

inclusive governance system, they were also able to capitalize the funds

from the Rural Micro Finance Development Centre amounting to NPR

• GESI Friendly activities: For the subsidized loan provided by the Central

Bank, AMC has given priority to women and the disadvantaged group.

disadvantaged group. Moreover, in all activities implemented by the cooperative,

at least 40% of the participants (e.g. trainees) should be either

women or from disadvantaged groups.

A story of Yanuka Gharti Magar 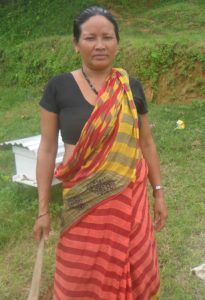 Yakuna Gharti Magar is a resident of Pyuthan, a district in the Mid-Western

region of Nepal. She comes from a family where girls were not supposed to

be educated, but to carry out household chores. She got married at the young

age of 19. Her husband earned the family income through his employment

stayed back with her in-laws to take care of their daily needs. Unfortunately

when she was just 34 years old, her husband died and all of a sudden the

financial burden was on her shoulders. She has no education, no access to

finance and basically nowhere to go.

receives support from INCLUDE to develop service packages for its members,

e.g. in the field of honey production. Yanuka was introduced to beekeeping

activities and received a micro-credit to start with 3 hives. Yanuka participated

trainings on quality production, storage and processing. She also participated

in exposure visits to other beekeepers in the region. Now, through the sale of

entrepreneur who is able to educate her children, look after her in-laws

and even take care of her nephew.

Some success stories of inclusive Business Models: Gender and Social Inclusion pays off! 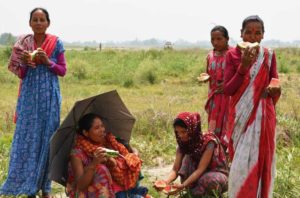 In the programme districts, vulnerable groups such as

landless and land–poor people are faced with high levels of

discrimination, poverty and food insecurity. INCLUDE

along the Rapti river to identify their most disadvantaged,

landless and land-poor members. These people are

invited to become a group member of the cooperative and

to participate in farming activities along the vast banks and

beds of the Rapti river, once the river has pulled back after

the rainy season. These farmers receive training in good

agricultural practices and farming inputs such as seeds,

farmers have been so successful in their farming practices

that traders drive their trucks all the way to the riverbed

uphill markets. In the pre-monsoon season alone in 2015,

the income of more than 2.000 women and disadvantaged

people through riverbed farming is at least NPR 15.000

though, the participants in riverbed farming state that

their status in their community has grown dramatically

and that this non-economic benefit is equally important to 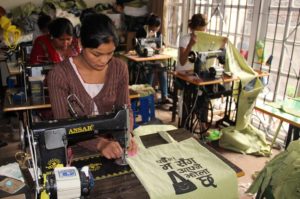 “Hamri Bahini” meaning “our little sisters”, is a social

(HCI) and initiated with the technical support of

INCLUDE. While addressing Nepal’s environmental

for disadvantaged young women of Nepal. The business

model is to replace plastic bags in urban areas of

women, some of whom are rehabilitated trafficked

women who have hardly any other chance to find respectable

jobs. An aggressive and successful anti-plasticbag

campaign by HCI led to plastic bags being banned

Nagar Mitra – Friends of the City 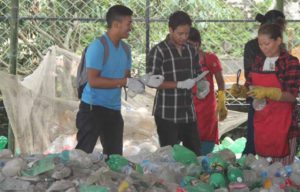 Another HCI initiative, “Nagar Mitra – Friends of the City”,

improves the living conditions of the highly stigmatized waste

the most significant economic, social and environmental

and offers additional services such as health and hygiene

facilities, safety equipment and scholarship facilities for their

children. After just one year of its launch, Nagar Mitra already

disadvantaged women for the sorting and bailing of the PET

bottles. Also here, the betterment of their position in society

is stated as more important than only the better income.

In Nepal, a gender focus alone would not find political

nor societal acceptance. Rather a broader promotion of

of society (ethnic and religious minorities; people with

approach, is needed to mobilise partners and eventually

make a difference. INCLUDE tackles exactly this task.

“No other private sector development programme of the

German Development Cooperation than INCLUDE has

the inclusiveness agenda at the core of all its strategic

decisions; whether it is the choice of the value chains, the

choice of its partners and intermediaries or the concepts,

growth, all decisions are guided by their relevance to the

INCLUDE is a joint Nepal-German initiative under the

guidance of the Nepal Ministry of Industry and with

on behalf of the German Federal Ministry for Economic 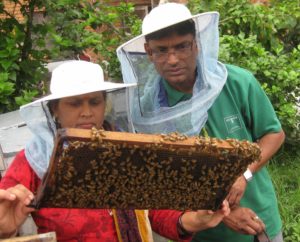