GIZ’ efforts for gender equality will be celebrated on Thursday, 10 of March in Mozambique’s capital Maputo. During the afternoon, GIZ colleagues will meet in the CaféKULTUR, a small familiar restaurant linked with the Mozambican-German Culture Institute ICMA. Members of a several gender relevant associations are invited, as for example Terezinha da Silva, national coordinator of Women and Law in Souther Africa (www.wlsa.org.mz), Femme Moçambique (http://femmemocambique.org), Fórum Mulher, but also the MSM organization LambdaMoz. Gender Focal Points from some governmental institutions are also invited. The event will be used, to show gender approaches of the GIZ program “Sport for Development“: young female and male Basketball and Football player will discuss about perceptions of their social environment – family and friends – regarding them playing those sports. A short movie will show the very different understandings of „What is Gender Equality“, and what changed during the recent years. This movie is composed by short interviews, which where made and filmed by GIZ colleagues and Gender Focal Points with project partners on both, political and on local level, during the last three month. (Movie can be published at Global Campus as soon as ready). And some posters will refer to African women, who have been important for gender equality.

On 9th of March a training will be held for the GIZ program’s gender Focal Points. The local trainer will use participatory approaches to train instruments of gender analysis and gender awareness raising, using concrete examples from the projects.

Mozambique provinces – Activities to be implemented during the GIZ Gender Week

The Good Financial Governance Program in Mozambique is aware of the GIZ gender celebrations, and the program want to engage in the celebration.  Our gender week will be filled with different activities to be implemented on our four provinces. The activities include:

Debates about gender equality to be held by different gender organizations like Fórum Mulher, and WLSA Mozambique (to be held in Maputo, Sofala, Inhambane and Manica with GIZ colleagues); 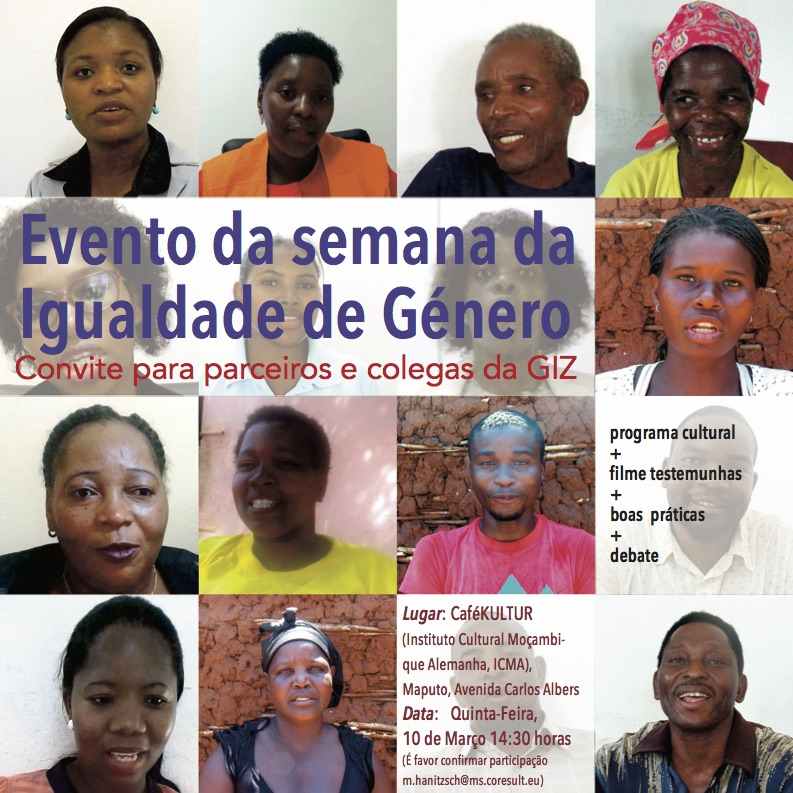