While ProAgri’s main event for the Gender Week took place in the North of Benin in the form of a workshop to promote female entrepreneurship in the rural area, the office in Cotonou organized an internal celebration. All ProAgri employees in Cotonou attended the celebration, which started with the screening of the film L’égalité des sexes au Bénin : « Sens inverse » created by the Decentralization Programme in Benin. The film, which showed a reversal of gender roles in everyday settings, prompted reflection by using comedy to highlight the reality of gender discrimination in Benin. Afterward, people gathered over a light lunch to discuss their reactions to the film. 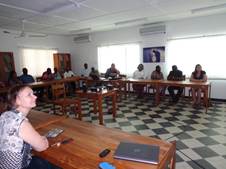 The day started with a brief overview of the activities of the women in the intervention zone, and an exchange between the women on techniques of transformation in the four value chains promoted by the project Promotion of Agriculture ProAgri (shea, cashews, rice and soy). Following the exchange, the advantages and difficulties encountered by the women in the promoted value chains were analyzed. Based on the analysis, the women gave ProAgri recommendations on how to improve their approach of working with female entrepreneurs. At the end, a mini-fair was organized so that the women could display and sell their various products.