The Local Governance Programme South Caucasus, which is implemented by GIZ on behalf of the German Government and in Armenia co-financed by the Swiss Development Cooperation and USAID, supports an enabling legal and institutional framework for local self-government and strengthens the capacities of municipalities. The programme is also committed to promote women’s rights to participate, hold decision makers accountable and play an active role in society. Amongst others it addresses the need to increase the role of women in local politics. Municipalities are important intermediaries between the citizens and the state. They need particularly strong female politicians who are in dialogue with the people in the community and also bring specific women’s issues on the political agenda. The programme aims at strengthening the capacities of female local politicians and encouraging women’s participation in planning and budgeting as well as in monitoring of effective and efficient service provision. It also supports networking and exchange at regional level among female local politicians in the South Caucasus.

In order to emphasize the role of female local politicians in Armenia, to raise awareness forr the issue and also to encourage more women to engage in local politics, a photo exhibition has been designed. In the framework of the celebration of the International Women’s Day on March 8 this photo exhibition will be shown from 4 -11 March 2015 at the Dalan Art Gallery Exhibition Hall in Yerevan/Armenia. 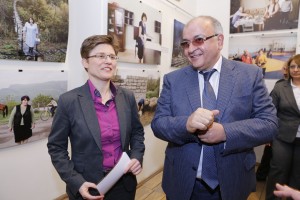