Albania (Tirana) – Get Together with Female Lawyers 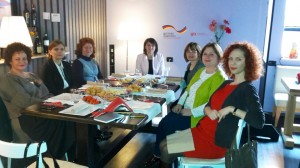 Exchange of female lawyers during the breakfast meeting in Albania.