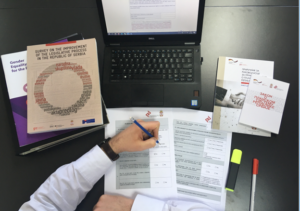 In 2016, Serbia’s Statistical Office introduced the EU Index of Gender Equality as the first country outside of the EU to collect these data. The gender equality index for Serbia is 40.6, compared to a 52.9 average for EU member states. Notwithstanding significant improvements in the area of power and decision making, traditional gender roles still shape the Serbian social, cultural, economic and political life. Many families maintain stereotypical gender roles, with an unequal distribution of labor between men and women, with the latter often shouldering a dual burden of balancing professional duties with family and childcare. 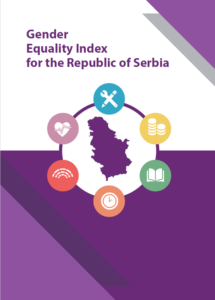 Based on the understanding that without equal rights and benefits of growth to all members of society there cannot be a sustainable development in Serbia in any field – political, social, economic or environmental – the National Public Policy Secretariat (NPPS) requested the project ‘Support to Public Administration Reform in Serbia’ to facilitate the development of an impact assessment tool, which captures possible impacts, positive or negative, a new law or regulation may have on the Serbian society – the Gender Test.

Gender, a quality feature of our work

The projects intervention (framed black) brings the consideration of gender equality to the policy-making process. It influences also how other stages, such as public consultations and impact assessment process, are performed (arrows).

In the first step of the Gender Test, policy-makers are required to assess whether the draft law has any direct or indirect impact on the men and women – individuals and/or businesses. If the answer to any of these questions is YES, they are required to complete a detailed Gender Impact Assessment (GIA). Within the GIA policy-makers are required to: 1) assess and explain possible impact of the law, 2) list all sources of information they have used in making their assessments (including sources of gender-segregated data), 3) confirm their compliance with the legal and policy framework on gender equality in Serbia, 4) confirm if they have actively involved experts and organizations in the area of the gender equality.

In addition to the long-term societal impact typical for public policy tools, the Gender Test contributes to improvements in short and medium term. It increases the role of Gender Focal Points in the Serbian public administration, by ensuring their participation in the impact assessment process. In the medium-term the application of the Gender Test, which is closely monitored by the NPPS, will provide insights into competencies and gender equality prioritization among policy makers. By exposing certain patterns or lack of capacities it will serve as an early alarm system calling for targeted interventions.

Government and civil society partners are valuing the introduction of the Gender Test as a big move towards mainstreaming gender equality into the policy process in Serbia. In the long-run, we hope to make gender-equality a core priority whenever policymakers embark on new legislation and national policy documents (e.g. strategies, action plans) which can affect the state of gender equality in Serbia.