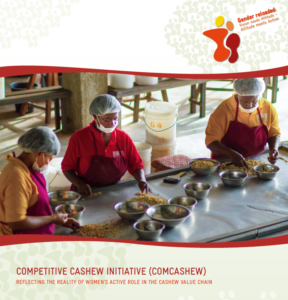 Women are actively engaged throughout the cashew value chain; about 80% of labor in harvesting and more than 80% of processing workforce. Yet women’s ownership of farms is below 10% and female factory owners and managers are below 5%. ComCashew works to reflect the reality of women’s strong participation in the cashew value chain and promotes their contributions toward its development.

To address the challenges women face in the cashew sector, ComCashew cofounded CasheWomen in 2017. The aim of CasheWomen is to: Facilitate mentoring, learning and information sharing; Highlight the contributions of successful women in the cashew sector; Draw attention to an overlooked group in the sector through strategic discussions; and influence more women to take up leadership roles. Activities include leadership trainings, meetings and panels during cashew conferences, annual publication of success stories of women in cashew, and a networking group. The networking group facilitates easy information sharing, especially for cashew trading. It currently has a membership of about 250 women worldwide, majority from Africa and Asia. Over 100 women’s stories have been featured in the CasheWomen Leaders in Cashew publications so far. When ComCashew started operating in 2009, hardly any value chain experts could be found in the African cashew sector, particularly female experts. Thus, in 2014, the project started to train sector actors in its Master Training Program (MTP). The training has a gender-sensitive design: 50% of trainers are female and a gender in cashew module is included in course content. To encourage female participation, childcare costs for participants with young children are covered, a 50% quota for male and female applicants is implemented and priority given to women and youth qualifying for the programme.

As a result of the affirmative action there has been an increase of female participation by almost double 48%), proving that the challenge is not the absence of women in the sector, but in making sure that women have access to available opportunities. Women have confirmed that the training from the MTP and CasheWomen activities allow them to make informed decision, participate in and benefit from the peer-to-peer learning and mentoring in order to make their businesses viable and sustainable. There is also higher visibility for women who work in the sector.

“There is a lot of improvement in my professional skills. I can now carry out field visit. I also acquired public speaking skills and gained self-confidence. Before attending the Programme, I could not have eye contact with my audience. I used to panic when I was given assignment, but I now confidently organise my job. I feel there is an increase in my knowledge.” Aminata Traoré, Assistante de productions Végétales et Animales au Ministère de l’Agriculture et du Développement, Côte d’Ivoire