Pakistan: Inspiring Change – Women in Action in the Textile & Garment Industry of Punjab

Introduction to GIZ’s Labour Standards Programme in Punjab
In the area of labour and environmental standards, particularly in the textile and garment industry in Pakistan’s Punjab province, GIZ’s Labour Standards Programme (LSP) is carrying out activities which aims to improve the sustainability standards, mainly through capacity building of public and private stakeholders. LSP’s overall interventions in this area are focused on supporting the country in becoming a major player in the global market. Compliance to labour standards, in this regard, will also ensure that Pakistan maintains its Generalised System of Preferences (GSP+) status, a privileged access to the European Union (EU) market under EU’s preferential trade scheme, which was granted to Pakistan in 2014.
Currently, Punjab houses the processing of home textiles, denim, knitwear, technical textiles and much more. The textile and garment industry employ around 40% percent of the total workforce and according to the Pakistan Institute of Labour Education and Research (PILER), approximately 30% of the workers in this industry are women1. The working conditions, unfortunately, for women in the industry, are dismal; they work for low wages in labour intensive units, with fewer incentives and growth opportunities.
To foster gender equality, LSP works to enhance the expertise of female experts in order to gain a better understanding of gender-relevant aspects of occupational health and safety. It supports the Labour & Human Resource Department to increase the number of female labour inspectors. The use of instruments for strengthening female labour inspectors, such as mentoring, peer coaching and training courses, helps to support women in performing their jobs as labour inspectors. In addition to this, LSP works with private sector textile factories, with the aim to improve their productivity and improve compliance to labour standards, to provide better working conditions for workers, particularly to empower female workers in the partner factories.

Managing Change
LSP has introduced a methodology called the Dialogue for Compliance to improve compliance to labour standards while boosting productivity in the factories. This methodology is simple yet effective and aims to strengthen the exchange of information between management and employees through effective dialogue. The following graph gives a step-by-step view of Dialogue for Compliance:

How do workers benefit from this methodology? Dialogue for Compliance ensures a trickle-down approach which is designed to ultimately benefit the workers, whilst also improving production planning at the factory level and boosting productivity. Mainstreaming gender at the beginning of the entire process hence results in more focus on gender equality, particularly on female empowerment, in the factories.

Gender Empowerment
To ensure the sustainability of the process, factories who have been empowered through Dialogue for Compliance continue to meet one another through the Community of Practice (CoP) platform of GIZ. LSP has established CoP for the alumni factories where they meet quarterly and share best practices on jointly selected themes. One of the four thematic areas is gender empowerment. The following figure puts forth a brief overview of the area of interventions: 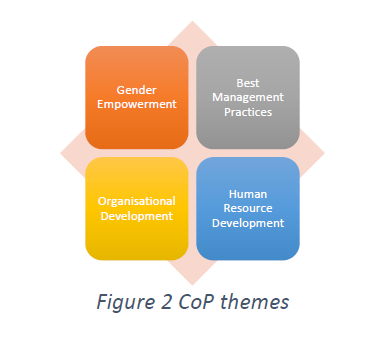 CoP members meet quarterly and jointly brainstorm activities which they then list down on their Action Plans for the next quarter. Together, the members work on the action plan which is then discussed in the next meeting. In these workshops, the different needs of female and male workers are identified and the need to arrange training courses for women is discussed in order to qualify them for higher-quality jobs and to improve their communication skills. Following is an action plan on the Gender Empowerment theme which was developed during one of the CoP meetings listing activities that the members committed to for the next quarter: 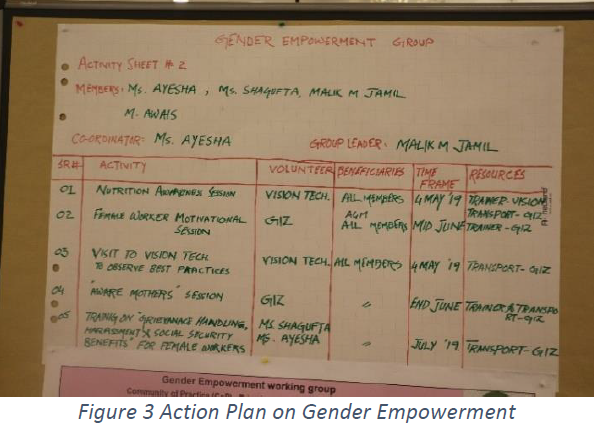 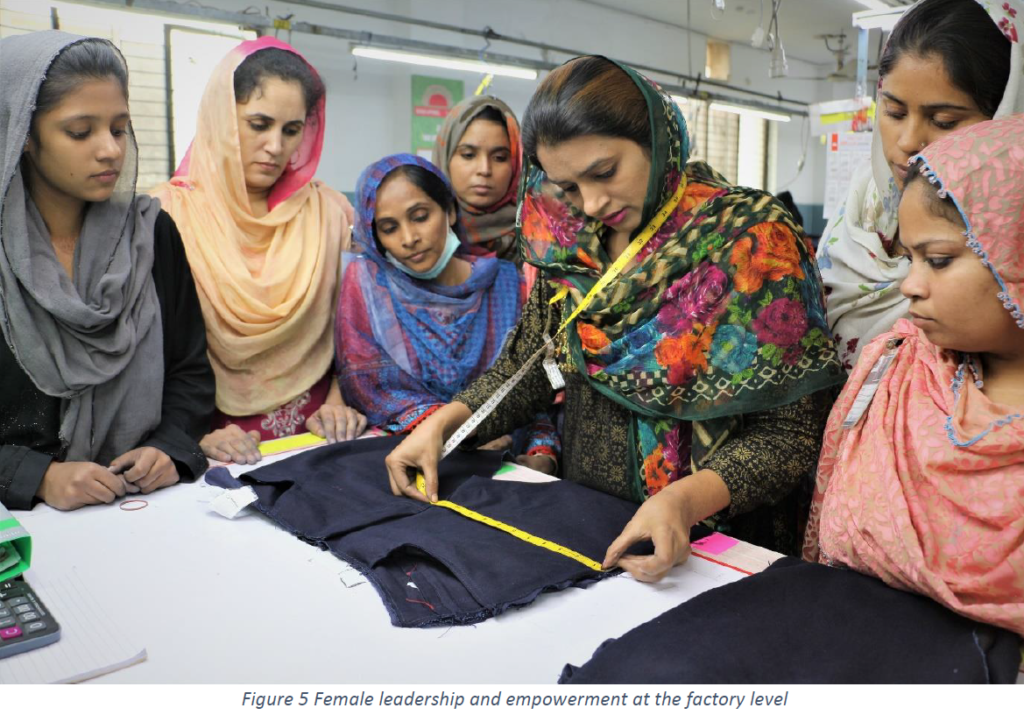 LSP initiatives have created impact; one such story is of Ms Kaneez Fatima. Ms Fatima started working as a stitching operator at one of the partner textile factories in Lahore three years ago. When LSP approached the factory, Ms Fatima had the opportunity to be part of a learning process where she developed her skills and learned more about the importance of health and safety at the workplace. The knowledge and exposure that she gained through the programme helped her improve her work processes internally. As a result of this, she was soon promoted to the position of team leader at the stitching cell.
Today, Ms Fatima leads a stitching cell where approximately 60 females work. This is the first stitching cell in the factory which employs female workers only. Not only this, the spillovers from her story can be seen materialising already; Ms Fatima is supporting the education of her younger brother, something she would not have been able to afford without the job and the growth it offered.
In her words, “The promotion was a great motivation for me, and I was able to set an example for others in my factory, particularly female workers.” 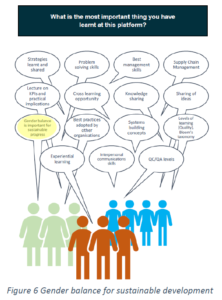 The figure below shows a graph from one of the feedback reports from a CoP meeting showing that for women, participation in such activities offers oportunities and is a step forward towards skills development; additionally, implementation of the Activity sheet (Action Plan) is not challenging for women. While this is just one part of the overall feedback, it reflects the views of male members (who are the majority) and who endorse female participation and consider such platforms valuable for females in terms of growth and leadership.

Women in Action
The story of Ms Kaneez Fatima is one among many; several other women are now part of the programme where they have a platform to voice their ideas and opinions and learn more about their field of work. The learning and development process that they go through is also likely to positively impact other female workers through spillover effects, improving work productivity and skills of many.