DEVELOPING AN ANTI-SEXUAL HARASSMENT POLICY FOR GIZ JORDAN AND LEBANON 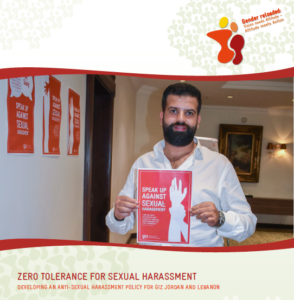 In Jordan and Lebanon, sexual harassment at the workplace is widespread and constitutes an obstacle to equal employment of women and men. Yet, both the Jordanian and the Lebanese legal system are lacking a clear framework for the prosecution and redressal of sexual harassment. Against this background, GIZ Jordan and Lebanon adapted the GIZ-wide policy on banning sexual harassment at the workplace to the national context. The adapted policies provide employees with insights on the topic (knowledge and prevention), a list of contact and resource persons on the level of GIZ Jordan/Lebanon and GIZ headquarters (HQ), gives recommendations for additional support outside GIZ and advices on how to react if they are affected by or witness an incident of sexual harassment.

In Lebanon, the process of developing an anti-sexual-harassment policy started with a staff survey to find out if employees had already experienced sexual harassment at the workplace at GIZ or with a previous employer. It turned out that there had been a few cases, but nothing had ever been reported. Both in Jordan and in Lebanon, draft versions of the policy were presented and discussed during a workshop with staff members following a first round of review by HQ and GIZ Jordan/ Lebanon. The workshops also served to raise awareness, share information on the legal situation in Jordan and Lebanon, on the GIZ-wide policy and on protection from sexual exploitation and abuse (PSEA). 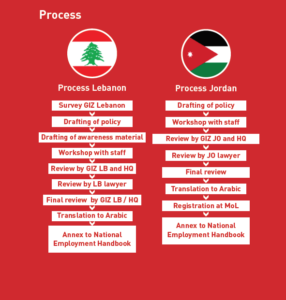 The workshops were followed by another round of feedback and review by GIZ and by local lawyers who confirmed the compatibility with national legislation. Afterwards, both country level policies were translated to Arabic by sworn translators. In Jordan, the policy was then registered with the Ministry of Labour and attached as an annex to the National Employment Handbook. In Lebanon the policy was also attached to the National Employment Handbook. GIZ Lebanon also developed some posters that were displayed during the workshop.

Staff members are more familiar with the underlying definitions and challenges related to sexual harassment at the workplace and in GIZ’s work with partners and beneficiaries. New staff members are sensitized and informed during the mandatory on-boarding process. To keep awareness and response levels high, the policies foresee an ongoing sensitization and training of staff. For 2020 trainings on the referral mechanism at country level as well as on prevention and protection from SEAH are planned. Both in Jordan and in Lebanon, the involved local lawyers and officials from the Ministry of Labour value GIZ’s SEAH-policies as good practice and actively encourage other organisations and companies to develop such policies as well. As a result, some NGOs have started round table discussions with employers and lawyers on the topic of sexual harassment and the development of SEAH-policies. 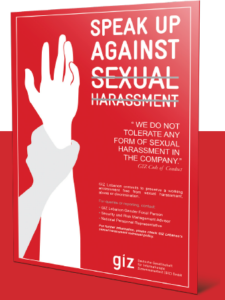