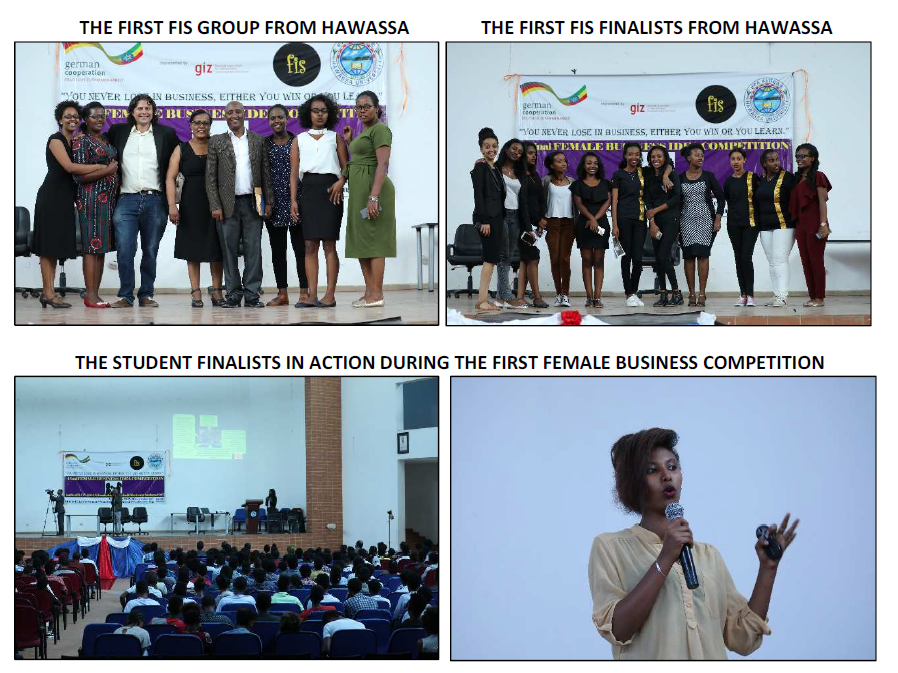 1. Introduction – How it started and what we have achieved so fare
The GIZ Sustainable Education and Training Programme of Ethiopia (STEP) is mainly active in the areas
Higher Education (HE) and Technical & Vocational Education & Training (TVET). As part of its work it also
supports entrepreneurship and business incubation at Universities within the Higher Education
Component.
In Hawassa University, we support Entrepreneurship and University Industry Linkage with a development
advisor and further supports from the federal and regional office.
As we started supporting Hawassa University in 2017, it had only one College which was running
business idea competitions and the participation of females was 0. Similar as in other Universities, from
8 other Universities we get to know that they also their participation rates of females which was
everywhere between 0 to maximum 2.
Beside other supports in the Entrepreneurship & Incubation area of Hawassa University it has been
important for us to increase the participation of females in such kind of activities.
In Hawassa we started encountering this the first time by establishing a community of practice, the
“Female Innovator Support Group” (FIS), with the goal to encourage a higher number of female students
to go for entrepreneurship. In 2017, we developed a concept how to strengthen female student
participation and their success in the field of Entrepreneurship and have started to bring it into action
with a special kickoff event and business idea competition for females as a first step.
Within our first female business idea competition in Hawassa which last from mid-2017 to mid-2018, we
achieved more than 200 applications from female students from which we choose 80 for preparation
trainings out of which we have built 17 business teams and finally incubated 5 female business teams in
the incubators of Hawassa University. Five Businesses which outreached the quality of other incubated
business from other business competitions in Hawassa.
Now, one year later 2 of our former female incubates started already their own business, from which
one even made it under the Top 5 in a Pan-African business competition. And also, one of our new
incubate groups already won in a regional competition 40,000 ETB this year.
The same time we started in mid-2019 to expand the approach to further Universities by organizing a
special workshop for 4 Universities together and by using our experienced FIS Group members from
Hawassa as consultants to implement the approach at the 4 Universities.
Even it is just a start, we already could start the implementation in Bahir Dar, Adama and Debre Markos.
Where the application rate of females has gone up from 0-1 to 150-170 after a first kick off event. And,
where we could already conduct trainings in Bahir Dar and Adama where we have now 4-5 female
business incubation groups in both Universities.
In Debre Markos they even created already an official position called FIS-Officer which is like a
department head position and in Hawassa we are on our way to launch now a Female Innovation Centre
with a Female Innovation Centre Head and a Female Business and Technical Development Officer.

2. The FIS Concept, the FIS Group and the FIS Activities & Capacities
The FIS Concept
The FIS concept targets to reduce the influence of obstacles and to strengthen motivational factors for
becoming an entrepreneur for female students. The major tool for this is to stimulate an encouraging
and supportive environment and community in which female students feel safe, can support each other
and like to be a part of. A further important tool is to demonstrate that success is possible and that
failing doesn’t hurt as much as usually supposed and that they are not alone if that happens.
These entails:
– To develop an internal community which can create awareness and activate their peers
– To conduct special occasions only for females where they are among themselves
– To offer extra capacities and linkages only for females to provide further support and safe space.
The Internal FIS Community – The FIS Group in Hawassa
The Group is established to support the university incubation centers to encourage female students to
participate in entrepreneurial activities and to become female entrepreneurs. The team consists of
voluntary team members of female university students and staffs. The team in Hawassa started with 5
staff members and 2 student members.
This community is mainly engaged in promoting entrepreneurship events to their peers but also in
charge for developing activities of the group in a self-organizational team approach and is supported by
that with special trainings and coordination support by the University Industry Linkage Directorate and
GIZ development advisor from Hawassa.
Activities and Capacities – Special Occasions and Extra Capacities
Special Occasions entail
– Special entrepreneur and business development trainings as preparation for business idea
competitions for female students
– Female Business Idea Competitions with tailored approaches where female students can
compete among themselves
– Special events such as Role Model Events and Failure Experience Sharing Events in which female
students can learn from the experience from successful and failed female entrepreneurs.
Extra Capacities entail
– A female entrepreneur club in which ongoing female student entrepreneurs and established
female entrepreneurs can meet regularly to exchange experience and support each other with
creativity, advise, comfort and energy
– Facilitation support for selected female projects in terms of mentoring, market and finance
linkage from the FIS Group
– In the start with extra incubation space for female businesses which doesn’t fit to the existing
incubators in Hawassa, because these incubators are only open for technology or agricultural
driven businesses. But meanwhile it developed in Hawassa to an own incubation center.

3. The First Female Business Idea Competition – The base for the expansion to other Universities
The Female Role Model Event as Kick Off
We organized a female entrepreneur role model event as kick off for the first female business idea
competition as first activity of the FIS Group. For that we invited 3 successful entrepreneurs to give
motivational speeches and used the event to introduce the FIS Group to the University and the
community. In total we had 400 participants including roughly 35 female entrepreneurs from Hawassa.
The marketing targeted the female entrepreneur role model event and the competition at the same
time. As tools we used the usual way of flyers and posters but could benefit strongly from the FIS Group
members who were responsible for the flyer distribution and created a strong mouth-to-mouth
recommendation. The group members have been trained before with the entrepreneurship model which
we use for the competitions and because of that have been enthusiastic and competent promoters.
The event was a great success although half of the participants had to stand in the floor and listen to the
speakers because of an unexpected participation which exceeded the allocated room capacity.
In the expansion to other Universities we used the same model and started always with a kick-off event to
increase the awareness and motivation for applying to the female business competitions.
The Competition Approach
Students had to apply with a motivation letter to get selected for a preparation training. The preparation
training takes one week and is conducted either consecutive in 5.5 days or split to two weekend classes.
Within the trainings the participants have to develop their business ideas, form business teams, conduct
customer surveys and conduct a final presentation to be selected for the finals. Each team which gets
selected for the finals will receive technical and business mentoring support and financial prototypebuilding
support of up to 4,000 Birr for materials (approx. 120€). The price for the winning team was a
special award in form of tailor-made designer clothes for each team member from a famous fashion
designer, who was one of the female entrepreneur role models at the kickoff event. Beside that the
winning team gets an incubation working space and further mentoring support to start her business, but
this benefit was also available for all other finalists who performed well enough.
In the expansion to other Universities we also used here the same training model by using FIS Group
members from Hawassa who already has been developed to trainers and searched other sponsors to
have also here special awards as final price.

The Competition in practice
After the event we ran two application rounds and received in total 200 applications. In total we selected
80 participants for the trainings and conducted two preparation trainings out of which we build 17
business teams and selected 5 teams for the finals.
The 5 final team businesses were:
– A mechanical street cleaning machine which can replace unhealthy jobs of female street cleaners
and can be used also for cleaning industry sheds
– A simple smartphone projector which run without electricity and can be used during the night as
a TV substitute
– A female for female tutor agency which connects unprivileged university female students to
female school student tutor classes and facilitates tutors training, the marketing and class set-up
– A chicken processor which separates chicken into parts and package them to enable a better
chicken meat access compared to the common methods in Ethiopia
– A food delivery app for Hawassa which entails the digital and physical set-up
In the finals, these 5 businesses presented in front of 800 guests and was judged by professional judges.
The mechanical street-cleaning machine won the competition, achieved the 3rd price in a competition of
dot.ethiopia and found an early stage investor for their prototype which was above the University
prototype financing budget. The projector made place 2 in the female competition and get offered after
the competition the offer to work together with a solar company on a solar projector as part of the
company’s product portfolio. The female tutor agency made place 3 in the female competition and won
40,000 ETB in a competition from Reach for Change later. The chicken processor made the last place.
But, one of its members started afterwards another business and made it in a Pan-African Competition
among the Top 5. Also, one of the members of the female tutor agency started afterwards another
business in her home town. But a lot of students from the first competition didn’t continued working on
their businesses because they directly found a job after graduation. Our lesson learned from it was to
concentrate only on students between the 2-4 year of their studies because graduate students will
directly leave after the finals and might choose to take a job instead.
In the expansion to Bahir Dar and Adama University we conducted already the first-round training with
35 students out of 150-170 applicants and selected for the finals already 4-5 incubates in each University.

4. Conclusion
The FIS approach is successful. Everywhere where we implement it, it increases the female participation
enormously from 0-2 to 150-200. And, the quality of businesses which come out are on a high standard
compared to their men peers. The variety of ideas coming out facing different kind of problems which
are problems which are easier observed by women than men and thus open more market segments and
inspirations for new innovations. Even if students don’t decide to continue working on their businesses,
the experience and gained soft-skills during the processor helps them to find a job afterwards easily and
who knows some might will start their own business after gaining same professional experience other
has shown us that they can start their own business right away. That some don’t start it is a common
phenome, which we also observe by other competitions which are male dominated. Even if our
incubates from our female business competitions become not an entrepreneur, they develop to strong
and confidence woman who will support further the participation of woman in business.
The key for the success of FIS seems to be the safe environment. Competing directly with men and being
few females among a lot of men seems to be a discomfort which prevent female students for applying
directly. But, after the involvement in the female business competition and having developed their skills
and confidence they seem not afraid of anything anymore. All our female students presented in front of
a mixed audience of 800 people at the finals and some of the groups also achieved high places in
national and international competitions where they were not among themselves anymore.