GIZ Brazil’s gender working group (WG gender) has been improving and expanding its activities with the objective of transforming the organizational culture of GIZ on gender equity and respect for diversity. As Brazil is increasingly distant from achieving gender goals, micropolitics might leverage the transformation bringing visibility, reflection and changes in the personal attitude of each staff member of GIZ Brazil. Thus, we are proud to present the proposal of the gender WG for the gender competition of GIZ 2020.

Despite the existence of movements that aim to reach gender equity in Brazil the reality is still far from that. Women are structurally prevented from getting involved in political structures and gaining influence by many obstacles in daily life. Aspects like remuneration, double workload through family and career and little possibilities for promotion inhibit them from changing the unequal structure that has been perpetuated for centuries by governments that mostly represented men.

Although there have been some significant improvements in the area of education the inequalities in the labour market remain high. This can be seen in the differences in access to formal employment and the payment gap between men and women. In 2015, the average income of women made up only 75 percent of the average income of men, falling to 68 percent if only considering leadership positions and to 58 percent in the case of women with 12 or more years of schooling. In addition, women are still under-represented in management positions. Only 18 percent of all companies employ female managers while 59 percent of all companies have women working with them.

As if this were not enough, there are still huge inequalities based on skin color in Brazil. With a population of about 90 million Afro-Brazilian people in 2014 with 48 percent, black women were the group with the lowest participation in the formal labor market, while white men were the group with the highest participation with 65 percent. In addition, only 1.6 percent of the leadership positions were held by women with black skin[1].

In the 2017 United Nations Gender Inequality Index (GII) [2] Brazil ranks 94th out of 160 countries and, according to the World Economic Forum’s latest Global Gender Gap Report (GGGR), fell from 79th to 95th (out of a total of 149 countries) between 2016 and 2018. However, Brazil performs very differently in the four dimensions of the index: although the country has achieved the goal of gender equity in health and education, it lags far behind in economic participation and opportunities (position 92) as well as political empowerment and participation (position 112)[3].

The Reality of GIZ Brazil

GIZ Brazil had 173 staff members in June 2019 with 36 of them being interns and 12 in management positions. 111 of the employees were women and 62 men. Among all staff was only one person with disabilities.

Regarding the women, 16 of them were AMA of whom three held management and 12 technical positions. The other 95 women were NP with only one of them in a management position. Six of them had senior positions, 57 were professionals, 16 juniors and 15 were in auxiliary or support positions. When looking at gender and race in an intersectional approach, one can note that all of the six women that are part of the housekeeping team self-declared as black or pardo[4] in contrast to only seven out of a total of 42 women in technical positions.

With respect to men, there are 22 AMA, 13 of them in management and eight in technical positions, and 40 NP with only one of them in a management position and five in senior positions. The others are 17 technical advisors, four junior technical advisors, two administrative assistants, seis junior administrative assistants, three auxiliaries and two supports. Of all the men, only 14 declared themselves black, as opposed to 32 whites. 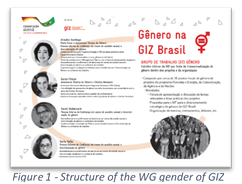 GIZ Brazil’s WG gender was founded in 2012 with the objective of promoting gender equity both within GIZ, supporting and developing activities among staff members, as well as in projects and with partners, promoting and giving advice on the topic.

Currently, the WG gender consists of about 20 gender focal points in the Tropical Forests, Energy and Communication sectors as well as the Administrative Center of GIZ Brazil. Additionally, GIZ Brazil has appointed one member of the working group as gender contact person and since July 2019 there are two technical advisors for the gender topic (30 % and 50 % NP) who share the responsibility of monitoring the topic in the projects.

The working group’s activities include a forum for presentation and discussion of relevant topics, best practices of the projects, proposals to the Management Team for the strategic orientation of GIZ Brazil regarding gender as well as the organization of events, trainings, debates and campaigns.

Every year, the gender working group organized internally in order to diversify and increase its activities dividing responsibilities between the group members and finding new partnerships within and outside of GIZ. Notable events of the recent years were: 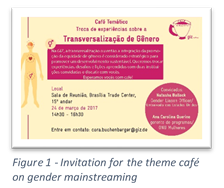 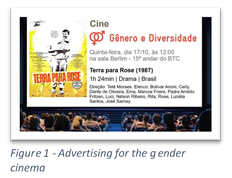 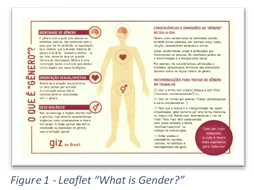 Perspectives for the future

With an increasingly structured planning, the participation of more and more colleagues of different areas of GIZ Brazil, the increasing commitment with the topic, the incentives from GIZ Brazil and the strong cooperation with the human rights project the WG gender aims to expand its activities in 2020. The plans consist of the organization of further events diving deeper into topics related to gender and diversity, the creation of more visual material, campaigns and support in order to make equity of the genders with in and outside of GIZ more and more possible.