Albania: Talents and Ideas for Albania’s Future – Women can make it

The “German October” is a traditional event which occurs in Albania since 2007. The activities are mainly organized by the German Embassy in Tirana in cooperation with other German actors in Albania, such as GIZ, DIHA, KFW, Goethe Institut, etc. Many different cultural activities are held, such as movies, theatres, exhibitions, music performance and other forms of arts, to promote Germany, German culture and Language in Albania.

This year’s topic of the “German October” was about the 30th anniversary of the fallen of the Berlin wall. One of the events with the biggest audience, organized by of GIZ was the open fair “Talents and Ideas for Albania’s Future”, to promote the GIZ contribution in making Albania a better place to live in, and to give the message that the young generation can make it in Albania. A special place was dedicated to girls and women to be role models and get inspired for a better future. 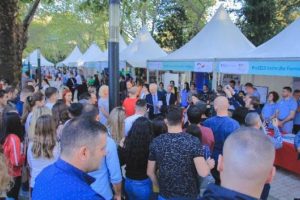 Young girls who are still question their future, and are figuring out their carrier path, need inspiration, models and examples to follow. Unfortunately, they cannot always be exposed to the successful models in life. This is the reason that GIZ, for the second year in a row, organized a “Shero talk” under the topic “Worth living in Albania”. Part of the “Shero talk” were five successful women, who “made it” in Albania and are well known in their professional communities. The speakers shared their experiences on how their career looked like, what are the challenges and opportunities of being successful in Albania, why is it worth living in Albania and contributing to the future of Albania.

Ms. Blerta Feka is a medical doctor by profession, after a long stay in Germany she returned in Albania and became a doctor and an entrepreneur. She was supported by the project Sustainable Economic and Regional Development, Employment Promotion and VET (ProSEED). The overall objective of ProSEED is to improve employment situation of young people in Albania and to enhance social participation of marginalized groups, including returnees. This is done by modernizing the country’s vocational education and training system on one side, and by strengthening Micro, Small and Medium Enterprises capacities on the other. The project is a G1 Marker, and as such has a clear focus on woman. Part of the program are start-up training and financial support for young entrepreneurs, such as Mrs. Feka. After receiving GIZ support from an application for business ideas, Mrs Feka started her own farm of saffron. It was difficult, but she made it and now she plans to expand her business. Ms. Feka’s talk was inspiring to girls and women living both in rural and urban areas. It has not been easy to be a woman who has two very demanding jobs, but she made it and she is sure that any girl and woman can make it! 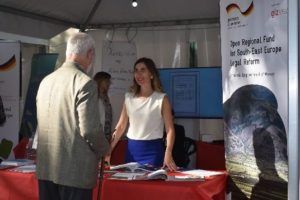 Ms. Elona Saliaj is a notary in Albania. She was invited at the “Shero- talk”, by the Project Open Regional Fund SEE- Legal Reform (ORF-LR). ORF-LR is a regional project aiming to support the countries of the Western Balkans to improve regional cooperation in implementation of the Chapter 23 and 24 of the EU Acquis. ORF-LR had implemented the project “Gender and Land Rights”, which was “inspired” by Mrs. Saliaj. In one ORF-LR event Mrs. Saliaj was exposed to the question of “What is the role of a notary in gender equality?”, and since then she is keeping a diary of stories where women lose rights over the property for different reasons, being those cultural, legal or procedural. Ms. Saliaj shared her concerns to various donors and public institutions, but she found a door open only at GIZ, where her diary became an interesting eyeopener for a serious social problem. In regional events organized by ORF-LR she found the support of peers in all the Western Balkan countries, who had face similar problems of women losing their right over property, and as a result a regional project took life, which improved in different scale the situation of women and land rights in six Western Balkan countries. On her talk, Ms. Saliaj pointed out that with a good will and some support you can make the “world a better place”. Gender and land right problems in the Wester Balkan is a problem everyone know, but no one talked about it. With the legal changes she initiated, Mrs. Saliaj took the costs of being judges by her peers as the “one who only things about women’s right”, and because of her, now they have to follow so many new rules and procedures. After her talk she invited everyone, especially women, to have a free legal advice session on property issues having her office moved for one day on the street. The ORF-LR has made possible that some of the stories of the diary are published and assist Mrs. Saliaj in addressing gender issues in the notarial work.

Mrs. Ledia Vasjari is a Returning Expert mediated through the Global Program “Migration and Diaspora” (PMD) at the University of Tirana, Faculty of Natural Science. As a Doctor in molecular biology she has obtained her Doctoral degree in the Friedrich Schiller University in Jena. She is part of the “returning expert”, Program which supports those who have gained technical or managerial skills through study and work in Germany and who then go on to use their knowledge and expertise in their country of origin. The GIZ program supports knowledge transfer at the Institutions where the returnee is accommodated, on the other side supports events and activities where the returnee is involved. Ms. Vasjari’s talk inspired young participants to follow their dream when studying. Even if everyone told her that there was no future in the molecular biology in Albania, she followed her dream, and become successful. She talks to her students with passion about molecular biology, while she is an inspiration to them to contribute to the future of the country.

Mrs. Elisabeta Poci is an Environmental Engineer, a project partner of the Open Reginal Fund SEE- Municipal Services (ORF-MMS). The project aims the regional cooperation for improvement of the municipal services in Accordance with EU accession requirements. Together with regional networks, municipal association, public utilities and their associations as well as consumer organizations, ORF-MMS creates a basis for an appropriate dissemination of developed instruments through the networks, such as business planning model for the management of water supply networks. For Mrs. Poci, being an engineer, is not unusual to find herself as the only woman in the room, in different activities she organizes or attends. Being of the other gender for her has been the rule at school and at work, but that did not stop her from following her passion and advancing in her career. With the GIZ support she was exposed to new management techniques in the water sector, and she had been pushing to implement those. Ms. Poci is today the Executive Director of Water Supply and Sewerage Association of Albania and invites all girls to become engineers and not to step back because of their gender. She continuously encourages female students to be intern at their institution.

Mrs. Nada Dollani is a University professor, completing research between Germany and Albania. Mrs. Dollani has been involved in various legal projects of GIZ, and recently is assisting the process of harmonization of the Albanian legislation with the European Acquis, through the project “Support to pre-screening process for EU accession negotiation of Albania”. The project despite being a G 0 marker, promote female expertise in the legal drafting. Mrs. Dollani is one of the project experts who has brought into the Albanian legal research a new philosophy and different culture of work. She inspires her students through her dedication to the research, her work and persistence on asking for more for herself and her students. In her speech she strongly said: “The future is in our hands and we have to believe in it”. Fighting for the rights, for better school system, for more opportunities and for better conditions is one of the main causes, of her work and passion.

For years now, the German Cooperation has been supporting the improvement of the economic perspective and the enhancement of employment opportunities in Albania, through technical assistance and human capacity building, but most importantly, the focus on gender equality has increased over the years.

In GIZ Albania, is active since two years the Gender Focal Persons group, which organizes events, shares experience and transfer knowledge to the other members of the staff. After the second “Shero-Talk “ the group agreed to develop a monitoring system, which consist on reporting based on the gender analyses recommendations of each project, and a special monitoring will be done to the purpose of the “Shero-Talk”. As the purpose of the “Shero-Talk” was to inspire young women, one of the key elements to measure will be female interns and students which will approach the speakers to be their mentor in career for the coming year. The indicator attached to it will be: at least 2 interns have done internships with one of the speakers, at least 6 female students have been mentored by the speakers.