Mongolia: Promoting gender equality in and through education 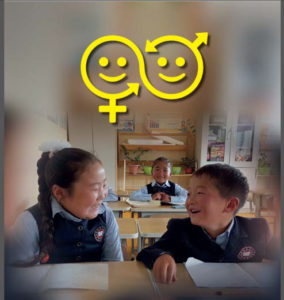 Mongolia is a landlocked country in Central Asia, located between the Russian Federation and
China, occupying the territory of 1.5 million square kilometers and it is the 19th largest country in
the world. Transition to the market economy in 1990s and pursuit for democracy led Mongolia to
support and commit to observing the international human rights standards by endorsing all
major international instruments, including the relevant ones to women’s rights and gender
equality. The Universal Declaration of Human Rights, Convention on the Elimination of All forms
of Discrimination Against Women, Convention of the Political Rights of Women, Maternity
Protection of ILO Convention are name a few.
The Constitution of Mongolia, written aftermath of the Mongolian democratic revolution in 1990s,
guarantees freedom of religion, rights, provides broad legal foundation for gender equality as
well through the Article 14 “No person shall be discriminated against on the basis of ethnic
origin, language, race, age, sex, social origin and status, property, occupation and position,
religion, opinion and education”. Furthermore, the National Programme for Gender Equality
2001 – 2015 was approved in 2002. In 2011 the Law on Promotion of Gender Equality was
ratified in Mongolia and it ensures gender equality in the political and economic spheres, civil
service, employment and labor relations, education, health care and family relations. The law
aims at mainstreaming gender equality into all private and public spheres. In order to ensure the
implementation of the Law, the Mid-term Strategy and Action Plan /2013 – 2016/ for
implementation of the Law of Mongolia on Promotion of Gender Equality and the succeeding
one for 2017-2020 were approved by the Cabinet Secretariat of Mongolia.
Along with emergence of a legal framework on promotion of gender equality, the institutional
structure was established. Since 2002 up to date, the National Council for Gender Equality
(NCGE), key body responsible for promoting, formulating, implementing, and monitoring gender
equality policies and for mainstreaming gender into government policies and programmes. has
been functioning either at the Ministry of Social Welfare and Labor or under the Prime Minister
Office. Council or ‘sub-committees’ of the NCGE has been established in all ministries and local
governments as the main body to enhance gender mainstreaming in the ministry or local level.

Challenges
Despite the comprehensive legal and institutional framework and efforts have been made, many gaps exist in Mongolia for ensuring gender equality in all spheres of life. Women in political decision making are relatively low, representing only 17.1 percent or 13 women out of 76 members of parliament. There are only two women among newly appointed ministers in November this year. Desicion-making posts as Ulaanbaatar city or other provincial governors positions are fully dominated by men.

The National Statistical Office of Mongolia stated in 2015 that employement rate for women was 51.7 % and 62.6 % respectively as per sex disaggrated data from 20-21 sectors. There is a strong tendency for gender differentiation in certain sectors. Education, health, retail, wholesale, food and service industries are dominated by women whereas in construction, mining, roads, energy and transport are sectors the situation is reverse. Occupational segmentation is strong continuing legacy of the socialist system, which did not allow women in certain professions and
thus, have created and continuing solid gender stereotypes in the society, which are not easily breakable even nowadays, affecting the career choice for students of secondary education.
Gender is not fully understood by majority of public officials and general public and often confused and mixed with a term “sex” due to absence of knowledge due to lack of courses in educational establishments.

Intervention
In line with the Government Action Plan (2012-2016), the Ministry of Education, Culture, Sciences and Sports of Mongolia has initiated the entire primary and secondary education reform by designing, piloting and implementing primary, lower secondary and upper secondary curricula since 2012. New cornerstones of the curricula reform focus on individual student learning development approach, discovery and support of every child’s talent and promotion of extra-curricular activities to support the core curricula implementation in the learning process. Under a new core curricula implementation, the content, methodology and textbooks have been revised, focusing on competencies rather than gaining knowledge in isolation, moving from teacher centered to student centered learning approaches. Moreover, education for sustainable development is being integrated into curricula, textbooks of secondary education along with building capacity of teachers to promote the sustainable development through their work.
The “Education for Sustainable Development” project, funded by the Swiss Agency for Development and Cooperation and implemented by a consortium of three organizations – GIZ International Services, Uppsala University of Sweden and the Institute for International Cooperation in Education of Switzerland, through its first component is closely supporting this policy reform since 2015.
The overall goal of the project is defined as to education for sustainable development (ESD) is integrated in the Mongolian school system and a framework (institutional, legal, and organizational) for sustainable development (SD) and green development (GD) is in place.

This goal will be achieved through following two outcomes:
• Outcome 1: ESD is integrated and adjusted in the curriculum of all the 628 schools (1-12 grade)
• Outcome 2: Awareness among leaders and the people (adults, parents, community, organizations) on ESD/SD/GD is increased and selected companies and organizations are certified according to ISO 14001.
The project works with all primary, secondary and high schools in Mongolia, trains teachers as ESD focal points and supports ESD networks. Gender sensitive standards, curricula, textbooks are to be developed and accepted, existing and new teachers are to be trained and enhanced their capacity to teach and educate students for sustainable development accordingly.

Within the framework of the project, in order to develop gender sensitive standards, curricula and textbooks, a thorough gender analysis of primary and secondary education of Mongolia was commissioned during the period of 2015 – 2016. The objective of the analysis was to a) identify broader gender issues in the Mongolian education system and b) to elaborate in detail how gender norms and roles are reproduced in the education sector of Mongolia through policy, education management, teacher training and teaching methods, contents and materials. Analysis also reviewed whether the material resources (how gender is situated in secondary education of Mongolia through teacher knowledge, attitude and capacity, whether textbooks, learning materials and physical facilities support the gender responsive pedagogy, whether pedagogical approaches and processes promote gender equality. Textual analysis of curriculum, textbooks, standards was carried out. Gender dynamics in the classroom, school environment, teacher student, student to student interactions were explored as well.
Findings show that 96.1 percent of the teachers who had been interviewed, failed to respond to definition of gender, 50 percent had been noticed to have gender stereotypes based on their answers. Also this study revealed that 83.1 percent of teachers interviewed had never been enrolled to gender related trainings, and 65 percent have answered that gender and gender related content has not been incorporated in pedagogy, psychology, contents and methodology of didactical subjects. 41.2 percent of school management is not familiar with the Law on Promotion of gender equality; 94.7 percent have mixed understanding of concepts of gender and sex.
The deficiency of knowledge, skills and attitude of gender equality principles creates conditions, where school policy and curriculum are not developed in gender sensitive manner; implementation of gender equality law is not adequate in school environment; and school management officials unaware and thus this condition does not allow exercising the duties and responsibilities under the law. School policy documents such as strategy on school development, school internal procedures and employment contracts; no regulations made taking gender perspectives into account on getting a job, promotion and professional development, managing duties between work and family, same salaries for the same positions, and on evaluating added salary; and no procedures are developed to prevent and create a workplace free from sexual harassment.
Furthermore, findings of the study show that gender equality content is barely contained in the teacher training curricula. There are no subjects directly related to gender responsive pedagogy in the mandatory and core subject courses in the teacher training curriculum of Mongolian University of Education (MNUE). There are two courses such as “Society and Gender” and “Politics and Gender” in the main curriculum of social science teacher training program. However, the content of these courses, first of all, pay too little attention towards knowledge, skills, and attitudes towards gender responsive pedagogy, the second deficiency is that only the students, majoring in social sciences, are able to enroll to these courses.

From the above findings, it clear that students of teacher training institutions are graduating without knowledge, skills and attitude towards gender equality in education and gender responsive pedagogy. All the above prove that gender sensitive teacher training is vital, and have laid rationale and background for the need to integrate gender responsive pedagogy into the pre service teachers training program.
This analysis was comprehensive and unique in nature, results and findings of which, contributed greatly to drafting of the Educational sector gender strategy, endorsed by the Education Minister in August, 2017. The Action Plan of the Strategy incorporates the need for capacity building of staff of the entire education sector towards gender equality and gender mainstreaming.
Therefore, the project has taken an opportunity to develop the course curricula, syllabus and handbook for gender responsive pedagogy for the first time in Mongolia for pre service teachers training programme to equip with knowledge and skills to support learners to identify gender stereotypes, promote healthy gender relations and eventually contribute to comprehensive gender mainstreaming in and through education by integrating in all educational components and processes. A handbook will cover topics such as gender sensitive curricula, textbooks, teaching aid, gender sensitive school room arrangement, gender sensitive school environment, gender sensitive school management, gender sensitive policy and budget planning as well as
monitoring and evaluation. Trainings need to be conducted for teachers to become gender sensitive and practice gender responsive teaching themselves. Therefore, project has trained 5 teachers at the Mongolian National University of Education to become trainers and spearhead the process.

Impact and sustainability of intervention
Gender is often and commonly understood by public and decision makers in Mongolia as concern of women and girls, which is quite common in the other countries as well. Moreover, in our country gender equality is misunderstood with gender parity and gender equity. Therefore, the project is taking only initial steps by developing a course curriculum on gender responsive pedagogy for pre-service teachers training program. The course curricula intends to prepare future teachers to deliver knowledge, skills and values on promoting gender equality to learners in order to change gender roles, created by a society, learned and reinforced by educational institutions.

Teachers of the pre service teachers training programs of the Mongolian National University of Education will firstly transform themselves by allowing them to analyze their own assumptions, methods and approaches, own values and attitudes. This transformation will empower them to transfer their knowledge and skills to students, who will become teachers in the nearest future themselves. This transfer of knowledge, skills and attitudes will in turn promote gender equality in secondary schools to ensure not only basic needs of girls and boys to be met but also realize their full potential such as enrolling and benefiting from the subjects and other learning experiences offered in schools and classrooms.