Background
In the wake of the civil war in Syria and the rise of the so-called Islamic State, Iraq is facing a heavy wave of displacement, which affects more than 3 million people di-rectly and causes enormous strain and hardship on host communities. In addition to the displacement of Iraqis, the outset of the Syrian crisis has caused an influx of Syrian refugees as well. As a consequence, the Kurdistan Region of Iraq (KRI) is home to one of the largest numbers of Internally Displaced Persons (IDP) worldwide. In fact, it is host to a total number of 1.300.000 IDP’s and approximately 215.000 Syrian refu-gees. This influx of IDPs does not only constitute an overwhelming strain on public in-frastructure and housing, but also overburdens the labor market and paralyzes the KRI´s capabilities to cope with the large number of people in need. The programmes for the Stabilization of Water Supply and Sanitation Services and Cash for Work have a mandate for transitional development assistance and find themselves in the midst of humanitarian actors and UN institutions.
In this context defined by the immediate humanitarian crisis, the gender aspect needs to be addressed urgently, but is often deemed an “unnecessary by-product” of humanitarian/development aid by male and even female beneficiaries. There-fore, the overall objective must be to identify overlaps of priority needs within the tri-angle of gender, ethnicity and religion to achieve improvements for IDPs, refugees and host communities. 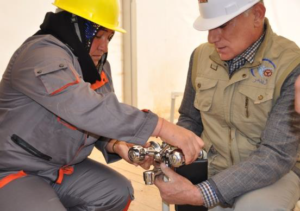 The Status of Women and Girls in Iraq and KRI
Depicting the situation of women in particular, according to the Gender Index, Iraq´s gender discrimination is rated as high and is primarily caused by factors, such as fam-ily code, resources and civil liberties. In this category of having a “high level of gen-der based discrimination”, Iraq is characterized as a country, where discrimination of women is embedded in customary law, social norms, cultural behavior, and by insuf-ficient legal and social protection for victims. The legal frameworks and cultur-al/customary practices undermine women´s rights in respect of legal marriage age, inheritance and parental authority/custody. Women´s physical and mental integrity is thereby restricted due to inadequate legal and cultural frameworks, which lead to high levels of acceptance of domestic violence and elevated levels of devaluation of daughters, leading to strong preferences for sons.
Leading from the theological and legal base of law and gender equality in general, the Kurdistan Region in Iraq (KRI) has adopted its own constitution, which, in theory, is free from any restriction, discrimination or limitation of religious and ethnic minorities and also proclaims that every citizen of the KRI is equal before the law. However, since KRI is part of the nation state of Iraq, Iraqi national laws are applicable to KRI, even though it acts de-facto independent and has own regulations. 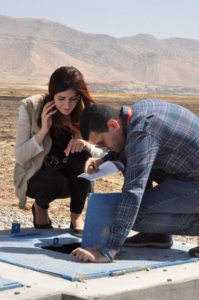 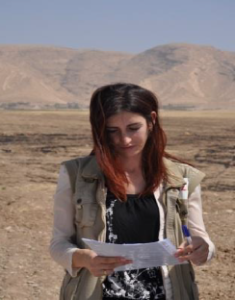 Thinking Gender on Different Levels
GIZ programmes in Northern Iraq inte-grate gender aspects into planning and activities on different levels: While ac-knowledging the realities on the ground, they try to embed empower-ment and fostering of women’s rights into the daily work of Transitional Devel-opment Assistance, as the following sto-ry illustrates: Contaminated drinking water caused by leaking pipes and fittings in-creasingly became a health risk for the population in and around Sharia, a small village in the south of Dohuk Governorate. An inter-project cooperation effort brought a quick solution. The Water Pro-gramme team offered technical support for the rehabilitation of water manholes, while the Cash for Work Programme accomplished the activities by providing the necessary workforce. Water man-holes provide access and at the same time pro-tect valves and fittings to regulate the distribution of drinking water to households. Due to lack of maintenance over several decades, pipes and fittings had become leaky and manholes got filled up with water. The aggregated water got contam-inated and, at some places, served goats and other animals as a drinking source. When the water pressure went down the dirty water oozed back into the pipe thus contaminating the drink-ing water for the surrounding households.
One of the fore workers, 23-year-old Khalida, graduat-ed from the Dohuk University with a degree in water resource management. She joined the GIZ Cash for Work program in October 2016. Serving as a CfW su-pervisor during the first months, she was contracted lat-er on as an engineer by GIZ. The Yazidi woman belongs to the host community in Sharia. Having gained experi-ence within the Cash for Work team over several months, she became the supervisor of the workforce that rehabilitated 80 water manholes. 26 men worked under her supervision. To the question whether she had any problems as a young woman in this male-dominated position, she confidently replies: “No, not at all – everyone treated me with respect. Sometimes I had to push them to work faster and they accepted.”
In another inter-program cooperative measure, a future workforce of 30 plumbers, including four women, were trained in water supply system maintenance in three camps. The trainees are now carrying out the maintenance of the water supply sys-tem at the respective camps. The Water Program supplied tool kits and coordinates with WASH actors at the respective camps and supervises the workers.
Such gender-sensitive Cash for Work measures are further planned for the largest infrastructure measure, a new water network for a whole sub-district, directly imple-mented by GIZ’s construction unit. Target figures of men and women are part of the logframe and gender-disaggregated data for beneficiaries from employment measures as well as from improved water and sanitation supply, is monitored on a monthly basis,
The Water Programme aims beyond rehabilitation and construction of infrastructure and is currently developing a water strategy for the Governorate of Dohuk including the needs and interests of all user groups. This strategy will have to mirror the conflictive environment and the possible humani-tarian scenarios which are very specific to the con-text as well as the challenges of women and girls in the water sector, within the institutions and within society. Through a campaign about water conser-vation, imple-mented by World Vision International, the programme targets especially schools and households: Not only are young people the better multipliers; in addition, women and girls can particularly benefit from empowerment through knowledge and education. 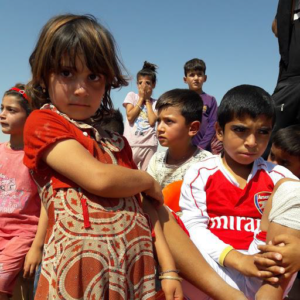 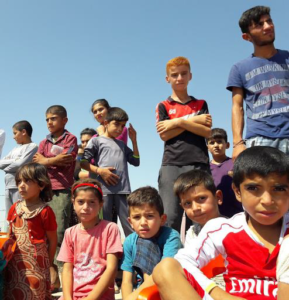 Communication, Support and Flexibility
The main factors for successful cooperation within GIZ and beyond lie in transparent communication about the joint objectives, a clear backing of the activities on the side of the local government authorities and the flexibility to react to urgent needs and priorities in this crisis without neglecting GIZ’s core principle of gender equality, thus consistently creating awareness with partners and the general population.