CONTEXT
Value chain development is at the core of the Green Innovation Centres (GIC) project of BMZ special initiative programme “One World No Hunger”, which is being implemented in 14 countries including India. It focuses on modernizing and professionalizing the agriculture and food sector with the aim to achieve a higher agriculture productivity and economic growth. The GIC project is working to improve the value chains of 20 crops across 14 countries and in India the focus is on strengthening of Potato and Tomato based value chains.
Though the country claims to be food secure feeding its 1.3 billion population at a macro perspective, there exists implicit and widespread malnutrition which calls for immediate action. Inefficiency across the value chains in the form of uneven food distribution, access, processing and storage, marketing issues are the causes behind this situation in the country. To address these anomalies, the GIC project in India was designed, focusing on 1) supporting value chains by promoting innovation 2) promoting partnerships within and along value chains 3) developing knowledge and learning systems 4) improving sector conditions.
All along the value chains of potato and tomato, there is significant contribution and crucial role played by women. However, their role being limited to production related labor works, their involvement in marketing and decision making of the crop is very limited. There is evidence that women tend to lose out control over the product as it moves from farm to market and thereafter income. They are mostly employed for planting and harvesting, but almost never in commerce or transportation of the produce. The processing industry employs women in less physically demanding work. Women employed in farming are usually paid 30% to 40% less than men for the same type of work. In India (Source: Gender Differences in Employment and why they matter, World Development Report 2012, World Bank), this kind of gender inequality is prevalent in every sector including agriculture. Considering the gravity of the issue as a serious threat for development, several policy initiatives and schemes are operational at national, state and grassroots levels. Mahila Kisan Sashaktikaran Pariyojana (MKSP) is one such nationwide programme with the objective to empower women in Agriculture sector. As a complementary effort, GIC project from GIZ is working with the Ministry of Agriculture incorporating ‘gender marker’ in all its approach and interventions.

GENDER MAINSTREAMING IN THE PROJECT
Gender aspect is an integral part of the GIC project since its programme planning and conceptualization phase. The objectives of the project give due importance to gender targets and figures to be achieved within the project duration as below,
• Creation of new jobs in the up and downstream enterprises of the value chain, of which 35 % should be women.
• Training and competence building of the stakeholders involved all along the value chain targeting 35 % of women.
• Improving the sector conditions through promoting gender enabling environment.
GIC is working with clear pathways to contribute for gender equality in the value chain through a well-defined result based monitoring and robust evaluation system to document the impacts and learnings.

GENDER AS QUALITY FEATURE OF OUR WORK
GIC project is being implemented in cooperation with various partners viz. AFC in Karnataka and Maharashtra, APMAS in Andhra Pradesh and WHH for skill development through green colleges on various green enterprises across all the states. To begin with, it is ensured that staff of the implementing partners are well sensitized on gender equality to be implemented across the value chain.
The project is based on ‘4G Theme’ highlighting the focus on Gender aspects addressed by the project. It is an acronym which stands for 1) Global Project 2) German project 3) Green Project 4) Gender project (4G is a popular abbreviation of the telecom sector for high speed and reliable data transfer). The acronym serves as a checklist for the markers and to focus on gender aspect at every stage of the implementation.
With this clear focus on Gender in the project, implementation strategies are formulated and contextualized based on area specific needs. For instance, social mobilization in the project village’s starts with the dialogue with communities in which active participation of women is ensured. Though, for farming related meetings the participation of women members is generally low, efforts are being made to sensitize men on the importance of women participation through depicting their role in the entire production process. It is realized that men sensitization on women participation is very crucial and important strategy to ensure participatory decision making. With these efforts, men have started including women members too in the Farmers Study Group.
Farmers Study Group (FSG) is the basic entity and foundation for training of farmers on the productivity enhancement measures in the project. While forming such FSGs with 20 members, equal opportunity is given for membership to both men and women. Generally, since men are the main decision maker on farming, majority of the members in the FSGs are men. However, it is reiterated and ensured to share the discussion happened in the FSGs with the women and to take their opinion while making certain farm related decision. This has resulted in increased participation of women members in the Farmers Field School (FFS) where in farmers are trained in the farm field on weekly basis. During FSG meetings and FFS trainings, women are encouraged to actively participate in the learnings and decision making process. Location and timings are decided taking due care of women members to ensure their full participation and active involvement in meetings. As a result, today women are active in group deliberations and decision making process in intervention villages.
In Maharashtra and Andhra Pradesh, it has been possible to form all-women FSG’s and also to mark their voice in higher level entity i.e. Farmers Producer Organization (FPOs), the legal entity comprising of 20-30 FSGs. Till date, 7 such all-women FSGs are functioning successfully in the project areas. It is expected that active involvement of women in the FPOs will ensure gender equality in decision making process related to marketing and processing activities i.e. Participatory Decision Making.

Participatory Technology Development (PTD) is another key innovative approach in GIC project, with the principle of “learning by doing”. In this approach, farmers experiment a new technology/practice by themselves on their own farm and it is ensured that farmer group is gender balanced. The result of the experiment is expected to be shared by both men and women with farmers in their village and neighboring for rapid dissemination and adoption of the technology.
Ensuring the gender equality in all the communication material is another key strategy adopted under GIC project. All such communication material can be viewed in this link,
(https://dms.giz.de/dms/llisapi.dll?func=ll&objId=109330622&objAction=browse&viewType=1)
Project also has a Gender focal point person to formulate the strategy, distilling the learnings and for cross sharing of the knowledge with other GIC project implementing countries.

LEARNING
Over the course of project implementation, there are valuable learnings gained from the field regarding gender equations. These learnings assist us in planning strategies for future interventions,
• Control over price acceptance for produce, marketing channels and income allocation are the key areas to focus to ensure gender equality in value chain development.
• Ensuring participatory process at all the stages of value chain is important to bring desirable impact on gender equality.
• Sensitization of men on importance of the gender equality, women empowerment and women participation in decision making is crucial.

CASE STUDIES
We have handful of exemplary case studies of women farmers from our project sites who are excelling in fields of leadership, entrepreneurship, community mobilization and farming practices as an outcome of our intervention activities. To quote few of them, Swaroopa from Andhra Pradesh state is a rural woman who is now a dynamic farmer group leader and facilitator. Gudiya Devi, from Deogarh is another noted achiever with her exceptional self-confidence and communication skills in motivating fellow farmers to go for cultivating vegetables in the region. Gulsheera is an agri entrepreuner with dairy farming in Karnataka state. She attended a course on the same conducted by Green colleges and as a result she gained improved technology and became a member in women Self Help Group (SHG). For complete case studies refer to this link,
https://dms.giz.de/dms/llisapi.dll?func=ll&objId=220288944&objAction=browse&viewType=1
Utilization of prize money:
The prize amount of 5000 euros will be utilized for two purposes. Half of the amount will be awarded to 5 women groups from our project sites on a competitive basis. Other half will be used as loan amount which serves as revolving fund within the women groups. Women can borrow loan at a minimal interest rate to accelerate their enterprise and repay it for further circulation within the group. The loan can be used for activities like extending their business, scaling up innovative practices, purchasing new/improved equipments for tomato nursery, setting up processing plants.

Nimmanapalle is one of the GIC project intervention village cluster. There are 18 Farmer Groups with 224 farmers of which 60 % are women famers. Ms. Swaroopa, a Rythu Mithra (farmer’s friend) has played dynamic role in mobilization of women into the farmer institutions and is the hand behind this achievement.
Ms. Swaroopa is 36 years old small farmer living with 6 family members at her village. GIC entered the village to implement the project in January 2017. At that time, project identified progressive farmers to mobilize, form and facilitate Farmers institutions. Ms. Swaroopa was selected as one such Rythu Mitra to join hands with project to achieve the objectives in the village cluster.
Strategies adopted by Ms. Swaroopa for mobilizing women:
Ms. Swaroopa regularly make house visits in her village cluster to motivate women farmers and convince their husbands about the importance of their wife’s membership in farmer groups.
She has taken into confidence the elderly people of the community so that they support her in mobilization of women.
Herself being a successful tomato farmer, it has been possible for her to convince male and female farmers in the village easily to adopt new/improved technologies. 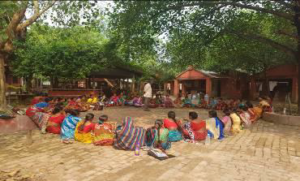 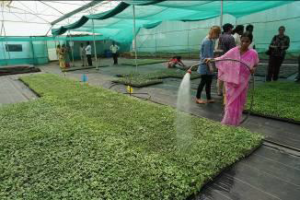 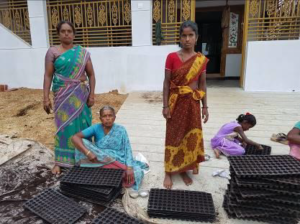 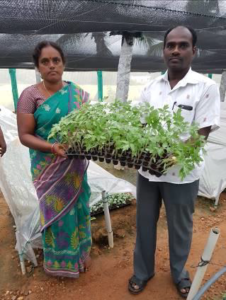