India: Conservation And Sustainable Management Of Coastal And Marine Protected Areas In India 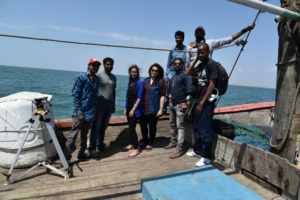 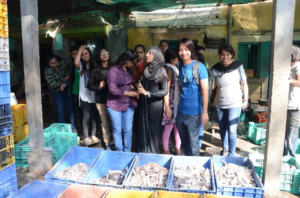 Indian coastline supports a huge human population, which is dependent on the rich coastal and
marine resources. It is estimated that nearly 250 million people live within 50 km from the
coastline of India. In the coastal areas, a major determinant of the wellbeing and livelihood
security is the availability of marine and coastal biodiversity resources and access to these
resources. Consequences of the biodiversity loss and resulting loss of ecosystem services,
therefore, have far reaching impacts on livelihoods and the overall well-being of coastal
communities, especially women. One of the most effective means of protecting marine and
coastal biodiversity is through the establishment and management of coastal and marine
protected areas (MPAs) and community involvement in managing the coastal and marine
ecosystems.
The CMPA project was one of the flagship projects of the Indo-German technical cooperation
supporting the CBD’s Aichi targets (2012- November 2017). The Project was funded by the
German Federal Ministry for the Environment, Nature Conservation, Building and Nuclear
Safety (BMUB). It is implemented by the Ministry of Environment, Forests and Climate Change
(MoEFCC), Government of India, and the Deutsche Gesellschaft für Internationale
Zusammenarbeit (GIZ) on behalf of BMUB. The overall goal of the CMPA Project was to
contribute to conservation and sustainable use of biodiversity in selected areas along the coast
of India, to ultimately benefit the local population depending on healthy marine and coastal
ecosystems. The three key sectors that the project engaged were forest, fisheries and media.

Further details on the project can be found here http://www.indogermanbiodiversity.com/projects-coastal+and+marine+protected+areas.html

One important aspect of the project was facilitating capacity development of key
stakeholders. The project supported capacity development measures for forest, fisheries and
media sectors.
Our studies found that in fisherwomen are of high importance but have little influence in
most parts of India. They have very little say in the planning, management and regulation of the
coastal and marine ecosystems. Women play a crucial role in coastal and marine environment,
and contribute significantly to the fisheries economy, though their contribution remains invisible
and unacknowledged. They represent a majority of the total working population in the fishing
industry. Women in small-scale fisheries in state like Gujarat play key roles in weaving and
repairing nets, processing of fish, sales and local trade. However, this does not lead to decisionmaking power for women, as their contributions are generally ignored and undervalued.
At the same time, the project was supporting media professionals and students in
facilitating their capacity development on reporting on coastal and marine issues. There
was a group of 60 media students of Gujarat University, who were undergoing the training by
the CMPA project on coastal and marine biodiversity for the media. The media students were
required to develop media products as part of their training for assessment of the learning
outcomes. In an effort to address the issue of gender mainstreaming in coastal and marine
conservation and management, the project encouraged the media students to take up the
topic of “Role of fisherwomen in coastal and marine conservation and fishing activities”.
The intent behind engaging the media students in this task was to make a deeper impact and
wider outreach. The media students gladly took up the challenge. Under the supervision of their
Professor, Dr Sonal Pandya, they wrote the script of a film titled “Fisherwomen”.

This documentary film ‘Fisherwomen’
depicts the life of fisherwomen and their
work. They perform most of the postfishing activities after fishermen bring
dish from sea. Their work and
contribution is ignored most of the time
in fishing industry. They face many
problems in day to day life, they too are 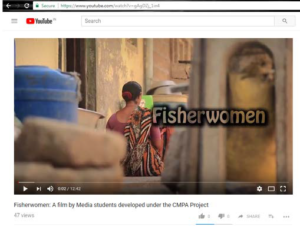 ignored. If they were not in these
activities fishing industry may fail in
providing any products related to fish
and other marine species. They are
involved in peeling squids, trimming
shrimps and carrying out more yield from
unfinished products to finished products. They do retail business in local markets with special
entrepreneur skills and earn livelihood. Their Net weaving skills are famous in Gujarat and they
also sew flags for boats and ships. This film is shot in Veraval, Somnath, Sutrapada, Dhamlej,
Mangrol and Chorvad. Which is the fishing hub of Gujarat. Fisherfolk community is mentioned
as Fishermen community where term ‘Fisherwomen’ gets remains unnoticed. When men go for
the marine catch. Women are busy in earning livelihood in their absence. Fisherwomen are
more in favour of conservation of marine animals and they are also equally concerned about the
declining populations of marine animals. Their fishery skills are their strength. They need to be
brought on participatory platform of decision making and given their right of equal opportunity.
The film is available at the YouTube channel of Indo-German Biodiversity Programme and can
be viewed here https://www.youtube.com/watch?v=gAgDZj_1in4

The Impact of the Film:
Films are a very effective medium to communicate issues that need to be shared with a wider
audience. In this process, the audiences who are viewing the film are benefited greatly, because
the film is more of an ‘Infotainment”. Moreover, engaging media students in developing such
films on women empowerment an conservation issues brings a larger and deeper impact, and
that is- the emergence of true champions of coastal and marine conservation and women
empowerment in the Media sector in India. These media professionals would be creating a
far reaching impact through communicating the conservation issues and women empowerment
issues with wider public and influencing policies.

How the perception of Media students changed after working on this film is reflected in
their post-training feedback. Feedback from two such students, who worked on the
‘fisherwomen’ film is reproduced below:

This short course that was introduced to
us during our college days had made a
huge impact on us, or I can say forever!
..When this training was introduced to us
with 7 modules, I thought it was just
another workshop for us .. But I was
wrong…it changed my thoughts… it was
not just an informative long sessions it
was indeed an infotainment! As media
students, it was a great opportunity for
us to make this documentary and help in
picturing the beauty and harsh realities of
coastal and marine life and livelihoodsVidya Pillai, Student- Department of
Communication & Journalism, Gujarat
University

‘Communicating coastal and marine biodiversity
conservation and Management through media’ – it
was a totally new subject for me, because it is more
related to the base of science…………Before taking
part in this project I have never thought of coast,
coastal life and biodiversity, especially marine
biodiversity. Never thought that our routine life and
thoughtless usage rather wastage of natural
resources can ultimately lead us to the dead
end……..and the lives of the fisherwomen…Learning
from all the sessions played a vital role in
documentary shooting, when we actually went for
shooting it. In the end I can say that now I have
totally new perspective to see the marine areas and
environment. I’ve become more thoughtful and
sensitive towards environment and marine
biodiversity and role of women after being a part of
this project- Shivani Joshi, Student- Department of
Communication & Journalism, Gujarat University

This film is being used as training material for the trainings of
media professionals in five media institutes in India, for the
trainings of field-level Managers of coastal and marine biodiversity
in Gujarat, and during the fisheries expeditions in India by the
Wildlife Institute of India. The film was recently screened and
awarded at the ‘Video SEWA Film Festival’ held on August 22,
2017 at the National Institute of Design.

Winning the award will further encourage the Biodiversity Programme to take up
similar initiatives for gender mainstreaming in other sectors in India where the
Biodiversity Programme is engaged in; such as the role of women in the wildlife
sector in India, especially the contributions of women front-line staff of the forest
departments in mitigating the negative impacts of human wildlife conflicts and
conserving wildlife.