Morocco: Shaking up gender roles in the “land of never-ever”

“Our society is not ready yet!” is a common phrase one is confronted with in the course of working to promote gender equality in Morocco. Since the “democratic spring” in 2011, the country is marked by contradictory tendencies in terms of gender equality: on the one hand, the new constitution of 2011 holds the state responsible for achieving gender parity. On the other hand, ideas of traditional, complementary gender roles have gained support in public discourse.

In order to support a bottom-up transformation of gender perceptions and roles, the GIZ project joined forces with the local women’s rights organization Fédération de la Ligue Démocratique des Droits des Femmes and the Moroccanbased international organization Quartiers du Monde to develop innovative pedagogical material that draws on popular education approaches. This is how the “Land of Never-ever” was born – a trainer’s toolkit that builds upon a fictional world in which the roles of men and women are inversed: women are in power and take political and economic decisions; men fight against cultural stereotypes and day-to-day discrimination. The toolkit provides trainers with a series of short movies and manuals, adaptable to various contexts and target groups, on subjects such as political participation, sexual harassment and economic inequality.

The innovative gender approach used in the “Land of Never-ever” fully convinced the project’s government partner institutions, which helped to initiate new collaborations. The National Human Rights Council took over the patronage of the project; the Ministry of Interior uses the material in its work with female community representatives; and the Ministry of Solidarity, Women, Family and Social Affairs commissioned the project and its partnering NGOs to produce further movies and manuals. The material and films will also be used within a project by Quartiers du Monde’s Network Femmes du Monde co-financed by the French Agence Française de Développement in Columbia, Bolivia and Senegal. These new partnerships not only confirm the need for new creative approaches. They also show that dialogue and exchange between institutions from diverse political backgrounds and with differing value systems can be successfully initiated through the work on a common, innovative product.

The presentation of men and women in situations of inversed inequality aims to challenge common social constructions of gender roles and the acceptance of discrimination against women. Feedback received from participants of the training confirms the approach to be successful:

“We are so used to things as they are. We don’t realize anymore that there’s something wrong. When you see the boy being harassed in the movie, it reminds us that that’s not normal, that it is an act of violence.” Souad, Fédération de la Ligue Démocratique des Droits des Femmes

“The visual is important! The movies help to put oneself in the place of the other. This will be very useful for the work with young men.” Mohamed, National Human Rights Council

“We need this moment of shock if we want to achieve change! That’s what will push people to ask questions, to start rethinking the status quo.” Hamid, Social Development Agency 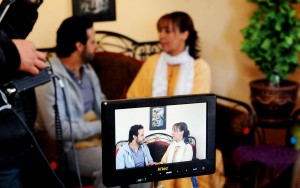 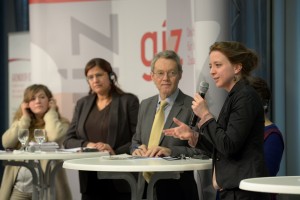 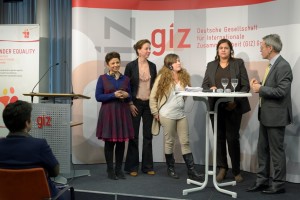