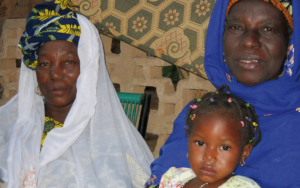 Before the law, men and women are considered equal in Burkina Faso. However, in reality women’s rights are continuously denied and neglected; violence against women by their own family or community members is very common. In a survey carried out by PROSAD, 40 % of the female participants stated that they had been victims of physical attacks within the last 12 months. Most of these attacks had happened within the family (78 %); in 68 % of the cases the husband had been the main perpetrator. The study also unfolded that most women are unaware of their own rights, not to speak of levels of awareness among other family and community members. This is rooted in Burkina Faso’s patriarchic traditions and customs, which means that men are the center of power within a family or community – a position that can be taken advantage of too easily.

Within the GIZ project “Family Dialogues”, families are trained to be a forum in which all members can engage in active dialogue, exchange information, and learn to listen to each other. With the guidance of local trainers, family discussion rounds on topics such as violence against women, female genital mutilation (FGM), women’s rights, and the importance of registering marriages and providing education for girls take place regularly. Families also learn to implement this approach beyond the formal training sessions in their day-to-day decisionmaking and conflict resolution. The project aims to enable women to speak out to defend their rights, to give children the room to participate in family life and decision-making, and to foster mutual recognition and acceptance of reciprocal rights.

After three years of implementation, the “Family Dialogues” approach had clearly paid off. A new spirit of open dialogue has been established in the target families, facilitating a better equilibrium between men and women. Interestingly, not only women could improve their social status – men also claim to feel more comfortable in their community and family life, and children are actively involved.

Statistics show that violence against women in the target communities has decreased by 16 %; 99 % of the women now reject FGM (in contrast to 42 % three years earlier) and seek to protect their daughters from the practice. Men and women are aware of women’s rights: 86 % of men and 79 % of women think that women deserve the same rights as men (before, 46 % respectively thought so). All couples who had been involved in the project had formally registered their marriage (in contrast to 2 %). This clearly contributes to formal equality between men and women within their marriage. Finally, the school enrolment rate for girls has increased by 24 %, which will permit them to become more independent from their male family members.

The successful approach of “Family Dialogues” has led to an increased demand by many other communities, villages and families to be trained as well. Partners within the Burkinabe Government, the private sector and civil society have become engaged in the PROSAD Program, and together with the regional program “Against Female Genital Mutilation”, the project has published good practices with regard to the “Family Dialogues” approach.