Documentation of the Event: 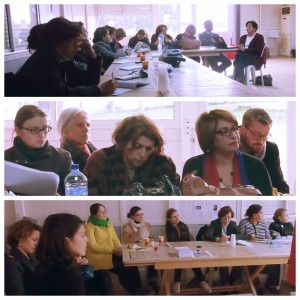 Framed by a thought-provoking and informative input by Salwa Kennou, president of the NGO AFTURD and expert on participation of women in (local) politics, around 15 GIZ staff met with several participants in the project “La démocratie locale a besoin de femmes / Local politics needs women » supported by GIZ Tunisia. The women came along from all parts of Tunisia to share their views and to report on the situation in their municipalities. The debate revealed interesting findings and important shortcomings in the run-up to the end-2016 local elections in Tunisia. Notwithstanding regional disparities, commonly shared key issues were the question of quotas and whether or not to work with (certain) political parties. Even though opinions on these issues differed and with obstacles remaining high, the women were convincing in their willingness and capacity to take a more active role in the political life of a newly decentralised Tunisia. 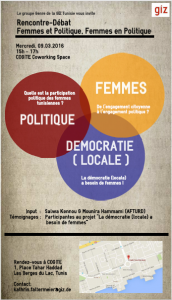 What: Debate and exchange about women’s participation in “local” politics; experts and activists will give an overview of relevant figures, obstacles and come forward with recommendations on how to strengthen women in (local) politics. Participants in the project “La démocratie locale a besoin de femmes / Local politics needs women » supported by GIZ Tunisia will share their experiences with a special focus on the imminent local elections end of 2016 (tbc).