A gender approach is necessary to insure that male and female members as well as other marginalized Groups of the poor rural population participate and benefit equally from the projects. Guidelines of the German development cooperation, as well as the Indonesian legislation, include the achievement of more gender equality as the top priority of cross cutting issues.

Responding to the growing calls for gender mainstreaming, the Ministry of Environment and Forestry (MoEF) initiated a process to mainstream gender in the forestry sector, asking the GIZ FORCLIME Programme for technical assistance in several areas:

• in the development of a “Gender Responsive Forestry and Climate Change Programme”,

• to revise the Ministerial Decree on the “Guideline for Implementation of Gender Mainstreaming”,

• to implement and facilitate the documentation of lessons learned from gender mainstreaming pilot activities in the FORCLIME demonstration areas in Kalimantan.

How does FORCLIME support gender mainstreaming?

FORCLIME uses the GIZ gender strategy for 2010-2014 serving as a guideline for actions, providing five strategic elements to promote equal opportunities for all. The five elements consist of:

Based on this strategy FORCLIME cooperated with the Gender Working Group of the Indonesian Ministry of Forestry. GIZ FORCLIME supported the Gender Working Group at MoEF in the inclusion of gender aspects into the Ministry’s Strategic Plan (RENSTRA 2015-2019) as well as in piloting the field implementation. This included establishment of demonstration activities at sub-national levels and – in a strategic partnership with the GIZ Strengthening Women Rights project (GIZ SWR) – leveraging SWR’s work with the Ministry of Women and Empowerment (MoWE) towards the forestry sector, using a multilevel approach. 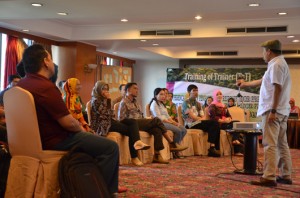 What has been achieved so far? Gender Mainstreaming in Forestry

• FORCLIME supported the revision of the Ministerial Decree SK Menhut No.528/Menhut-II/Peg/2004 on the “Guideline for the Implementation of Gender Mainstreaming”.

• FORCLIME, together with MoEF’s Gender Working Group, has trained at least 100 auditors from MoEF on gender, gender mainstreaming, as well as gender responsive planning, budgeting and auditing. The auditors will have the role to audit all units in MoEF on gender-based programmes and activities as outlined in the Ministry’s planning and budgeting. As gender-based auditing will be mainstreamed in 2016, the performance of all units in the Ministry will be measured against their gender-responsiveness. This auditing process will continue in medium to long term as it is mandated in the legislation.

• FORCLIME supported its partners at MoEF, the COP signatories, during the process of formulating a position on “climate change, forestry and gender” to be presented at COP 21 in Paris.

• Gender mainstreamed in national strategies: Through GIZ FORCLIME’s contribution, the overall five-year national forestry strategic plan (RENSTRA) 2015-2019 was gender-mainstreamed. MoEF allocated a gender responsive budget for 2014 of IDR 30,081,042,000 and budgeting for gender activities over the next five years will be allocated as outlined in the RENSTRA. To ensure the adherence of these plans FORCLIME, together with the MoEF Working Group on Gender, trained over 100 auditors of the Inspection Directorate on gender mainstreaming on how to audit the planning, budgeting and implementation of activities. The gender based auditing has a legal basis and will be implemented in 2016. All units in MoEF will thus be measured against their success in integrating gender-responsive activities in their planning frameworks.

• Multiplier effect: Through FORCLIME’s gender-related activities 25 gender focal points have been trained via the ToT approach, which extended the gender training towards 155 government officials and 215 farmers on field level. Additionally in a South-South dialogue the lessons learned from gender mainstreaming in MoFE were shared with 50 participants of GIZ Brazil projects on the 22 July 2015.

• Acknowledgements beyond our collaboration: In a national competition among all ministries, the Government of Indonesia awarded the top award to MoEF for implementing gender mainstreaming in its planning documents and activities. As a result of the support and collaboration, in 2016 MoEF is likely to move up to level 1 in the annually awarded national prize for “Gender Mainstreaming Classification” among all ministries. Also, GIZ FORCLIME won the first prize of the “GIZ Communicating Gender Award” in 2015 for GIZ Indonesia, Timor Leste and ASEAN.

FORCLIME have achieved significant progress in the mainstreaming of gender.