Indonesia is the biggest internet user in Southeast Asia (79,7%) and has a high rate of Facebook users with 63 million in 2015.

Although 68% of Indonesian women admit that internet plays a big role in their life, the use of internet is merely for social reasons. Indonesian women’s digital fluency is low and hindering the progress of women.

Research shows that digital fluency will close the gender gap at work 40 years faster in emerging countries (Accenture and Femina, Digital Fluency Indonesia Report, 2016). Science and technology is an important aspect in boosting competitiveness. Unfortunately the subject Science, Technology, Engineering, Mathematics (STEM) is still male-dominated. The 2014 SED-TVET Tracer Study data shows that from 15 SMKs supported by the SED-TVET Programme, the rate of girl’s representation in the field of engineering technology is quite low (29%). However, the participation of female students in Information Technology and Communication is higher (44%).

Promoting Gender Equality through Cooperation with the Private Sector

The involvement of the private sector is one of the key aspects for improving the quality of TVET. It is needed to match supply and demand, expose students to real work environments and to update the knowledge and technology of training providers. The active role of the private sector in terms of gender has been reflected in various SED-TVET activities, especially:

Gender films: A joint production with the Ministry of Education and Culture (MoEC) and the private sector.
“Indonesian Women in Science and Technology” aims to promote and encourage women to study in SMK and work in the field of science and technology.
“Diversity Pays Off: The Importance of Diversity Management for Companies” aims to raise awareness among companies about the importance of diversity management (especially gender equality) in companies.

SMK Girls Innovation Camp aims to raise awareness on the importance of girls’ participation in maximizing innovation and technology to support their career enhancement. This is the first event between SED-TVET and Intel Indonesia which is exclusively addressed for female students. 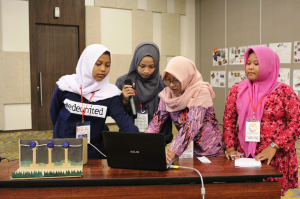 On 25-27 October 2016 SMK Girls Innovation Camp (GIC) was conducted in cooperation with MoEC and Intel Indonesia. The event was the first SED-TVET gender event which involved active participation of the private sector in sounding the importance of girls’ participation in science and technology.

Interactive and practical activities using technology which are useful for academics and career success was introduced. In this event, female students and teachers had the chance to learn the basic principles of team work, leadership, design thinking, technology and receive information on the importance of gender mainstreaming. Intel Indonesia was in charge in the innovation and technology course while SED-TVET was responsible for the School-to-Work Transition activities. The innovation course required students not only to innovate but what is more important is to have a solution-oriented innovation. This course stipulated students’ critical thinking in analysing both advantage and the disadvantage of their own innovation. On the last day students were asked to present their innovation concept and receive feedback from the audience. This event could potentially be conducted by MoEC in cooperation with various companies annually.

Some key success factors are:

Shared vision and commitment of the involved stakeholders (MoEC, Intel and GIZ): to empower women and increase youth employment.

Giving a stage for the private sector to speak up about the importance of active participation of women in science and technology. Affirmation from the private sector on the importance of women empowerment is extremely important to support the overall objective. Intel Indonesia held a special session on the company’s philosophy, facts and figures in terms of gender diversity in Intel and the reason why gender equality is important for them. The statement from Intel is essential to increase students’ confidence in pursuing their career in science and technology.

Translating gender issues in practical language: In order to enable young students to understand about the importance of gender equality, the content of this issue was translated into actual condition of Indonesia’s labour market and its challenges. In the sessions the participants could see female role models in the field of STEM through SED-TVET and Intel films. By providing data on the potential economy of Indonesia challenged with the problem of skills gap, participants were led to the importance of women’s active participation in STEM.

Wider involvement: Based on this experience, it has been proven that involving various stakeholders (incl. NGO) in promoting gender issues is effective to keep the issue “alive” and reach greater audience.

The three major challenges were and are: 1) There is low awareness of teachers on gender issues. It is also necessary that male teachers support female students and voice their support publicly. 2) There is a stigma that science and technology is male-oriented. 3) Being a middle man (in this case between MoEC and Intel) and finding a triple wins for MoEC, GIZ and Intel is not an easy task.

The More, the Merrier: Impact and Sustainability through Cooperation with Various Actors

A multi-stakeholders approach seems to be effective to promote the active role of women in STEM. Involving a Ministry, NGOs and the private sector has brought the issue into a greater audience.

The Topic was initially brought to a podium discussion in a GIZ Gender event in March 2016. The discussion was moderated by the Executive Director of Jurnal Perempuan. After the SED-TVET gender films had been released in April 2016 Jurnal Perempuan started a research on the topic of women in STEM. Jurnal Perempuan issued their 91st journal on “Status of Women in STEM” in November 2016 after SMK GIC had been conducted. The SED-TVET gender films and SMK GIC act as important sources of information for this research. Jurnal Perempuan screened the films in their Public Education in December 2016 in Medan by inviting two of resource persons in the films. Network between schools, NGO and company has also been established through the SMK GIC. MoEC was part of the filmmaking and they actively promoted the films through an annual cultural film festival, website and social media. The TVET Directorate within MoEC has given his positive statement on SMK GIC and they will issue the certificates for the participants.

Shared goals and strategies in raising awareness about the women in science and technology has united GIZ and the above mentioned stakeholders.

In the short and medium term cooperation with the private sector to empower women in science and technology through TVET needs to be intensified. The long term goal is to have more girls enrolled in science and technology in SMK. This event has potential since MoEC has shared the same view in the importance of digital literacy for example by introducing coding lessons in the SMK Curriculum.

In the event SMK GIC both students and teachers received a “Follow-Up Plan” course in order to strategically manage their project. Socialisation and multiplication is strongly encouraged to foster sustainability. The active participation of groups who socialise the knowledge they have received in SMK GIC and the initiative to conduct similar innovation camp at school will be rewarded. The approach will sustain through agents of change (female students) who worked on the project (assisted by teacher) and submitted a paper in January 2017. Currently SED-TVET team is reviewing 14 papers from the students.

The issue of gender is integrated in SED-TVET and measured regularly through monitoring and evaluation. During the Camp a gender specialist from Jurnal Perempuan (Indonesia’s Feminist Journal) was assigned to monitor and evaluate students’ and teachers’ awareness on gender issue. Both quantitative (pre- and post-survey) and qualitative (interviews) methods were applied. Monitoring and evaluation has been conducted to have critical findings on the role of women in science and technology. Through monitoring and evaluation essential data are collected and could be used for similar research. The event received positive feedback by the participants (female students and teachers). Some important findings are:

“I want to be an IT Programmer, because women programmer is rare, so I want to be a woman programmer. This event is very beneficial, as it adds to my knowledge. I am convinced that in the future I will be working in IT business.” (Female Student, 27 October 2016).

Survey data and interviews with teachers show the lack of understanding of gender issues. Overall, teachers support gender equality, however, they lack gender knowledge and awareness of gender discrimination in education. From the result of interview, at least 31% of teachers have a very gender-bias understanding. (Jurnal Perempuan, Draft Monitoring and Evaluation Report, p. 18)

SED-TVET and Intel maintain their fruitful relationship and are currently planning another intensive cooperation. The TVET Directorate within MoEC has expressed their full support in elevating information and communication technology competencies in SMK. SED-TVET has involved not only MoEC and companies but also NGOs in promoting the issue in order to reach greater beneficiaries.

Shared goals, philosophies and obligations of the involved stakeholders (to empower women and increase youth employment) have united us towards gender equality.

Some challenges in maintaining the cooperation with our stakeholders remain 1) Confronting the traditional gender role which could be promoted by not only teachers but also family and 2) Raising awareness among the private sector in applying diversity management. This involves, first of all, providing facts and figures on the benefit of gender equality for competitiveness.

SED-TVET is currently linking the issues of IT and tourism in the preparation of the upcoming project ISED (Innovation and Investment for Inclusive, Sustainable Economic Development) which is planned to begin in the mid of 2017. The issue woman in science and technology will still be a cross-cutting issue in the project. There could be potential activities such as developing APPs or conducting coding workshops for girls and female teachers. Involving media can be one option to raise public awareness and build positive image for the companies involved. As previously done in SMK GIC, monitoring and evaluation will be carefully conducted to later find out the achievement of the project. It will be interesting if the result can also be published in the (popular) media to reach greater public attention.