116 GIZ colleagues including management, representatives of the German Embassy, the Mozambican-German Cultural Centre (CCMA) and KfW participated during the virtual launch of the GIZ Gender Month in Mozambique on March 8, 2022. During the launch, participants raised awareness and shared examples of unconscious bias and how to overcome it. The German Embassy provided insights in the new approach of the German Feminist Foreign Policy. 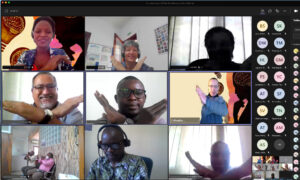 This year, the Good Financial Governance programme, commissioned by BMZ and co-funded by the EU and SDC, took the lead. The education and the economic development programme contribute. During one month, until the Day of the Mozambican Women in April 7th, several activities will take place under the slogan „Break the bias“.  Short videos and brief advocacy texts on gender and bias in the public service were developed with partner institutions. They are shared via messengers and “social media” with GIZ colleagues, partners and a wider public, including for example ministries, training institutions and service administrations. The activities will culminate in a panel discussion, co-organized with the Ministry of Public Administration, on the opportunities and limitations of the public service to act as change agent towards increased gender equity.