Panel Discussion on “Zebra style politics and women’s rights – How has this approach contributed towards curbing cultural barriers to gender equality?”
Complementing the GIZ Gender Week 2020, GIZ Namibia organised a Panel Discussion where a group of four experts shared their views on local gender issues, women’s rights and their representation in politics. This was the first of three events prepared for the Week.
The discussion revolved around the questions of why women in Namibia continue to be underrepresented in management and decision-making structures of public service, regional councils, parastatals and private sector despite positive gender-sensitive developments from its progressive constitution. One of the key points raised during the fruitful discussion was that the root cause of gender inequalities in Namibia leads back to be traditional practices, social norms and prevailing perceptions hindering access to opportunities, resources and power for women. Moreover, gender-based violence (GBV) is a persistent gender related challenge to be concerned about.
At regional and local authority level, men dominate as decision makers while women generally take the role of doing the job without having the chance to speak. “This is because Gender is not concretely on the Agenda!” stated Prof. Lucy. Thus, the speakers advocate for increasing more ambitious action across all levels and throughout the entire cycle of democracy. At national level, there is a need to enforce gender equality through legislation as opposed to voluntary action. In addition to this, capacity building is a key to raise awareness of relevant actors at institutional level. New structures which promote women’s interests are needed to ensure an enabling environment adapted to their innate role of being care takers. At society level, early childhood education is crucial to empower girls at an early age and to change preconceptions based on stereotypes but also to overcome Namibia’s “pervasive culture of silence”. However, gender transformative action becomes an illusion without financial support such as the allocation of a gender budget to relevant institutions at all levels. In general, there is an increasing emphasis on shifting the focus on qualitative issues, moving away from quantitative figures and indicators that assume transformation will follow.
The speakers were Naita Hishono (ED; Namibian Institute for Democracy), Prof Lucy Edwards-Jauch (Associate Professor Sociology at UNAM), Barbara Kowalczyk-Hoyer (GIZ) and James Itana (ED; Regain Trust) – pictured from left to right. The session was moderated by Innocent Haingura (GIZ).
For extensive details on the discussion, do not hesitate to contact Innocent Haingura or Julia Schmitt. 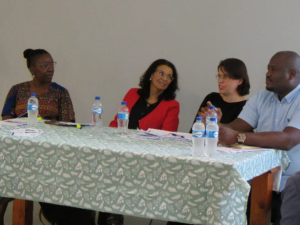