Be bold for Change at GIZ Indonesia 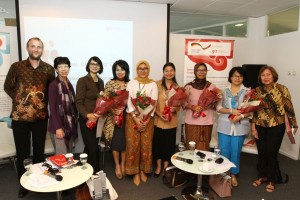 On Thursday, 9 March 2017, more than 55 participants followed the Invitation of the GIZ Gender Working Group Indonesia, Timor-Leste and ASEAN to join the GIZ Indonesia Gender Event 2017.

The resource persons and participants have experienced an exciting event with intensive discussions, including sharing knowledge based on the impressions of the visitors and everyday experiences. This event was part of the occasion of the GIZ Gender Week 2017 worldwide to promoting gender equality as guiding principle and a quality feature of GIZ work.

The core part of the event consisted of a panel discussion towards the Sustainable Development Goals and the challenges Indonesia is faced within regarding gender issues. Representatives from Jurnal Perempuan, KOWANI, KLHK, Komnas Perempuan and Gender Studies Programme of University of Indonesia were invited as experts. The discussion presented interesting topics about the gender situation in Indonesia and how to support the development of the empowerment of Indonesian women in the future.

Dr. Elizabeth Kristi Poerwandari, from the Gender Studies Programme of the University of Indonesia, pointed in her presentation “Sustainable Development Goals and women’s empowerment”, that Indonesia has ratified the major international conventions that uphold principles of gender equality and the empowerment of women. Nevertheless, she highlighted, that Indonesia still faces a high mortality rate, a high child marriage rate, and an increasing sexual harassment rate. Furthermore the rate of domestic violence is still high. All in all, she mentioned that, huge gaps exist between de jure and de facto of equality for women.

Ms. Ernawati Eko Hartono, S. Hut, M. Si, of the Gender Working Group – Ministry of Environment and Forestry highlighted, that in 2003 the ministry established a Gender working Group to integrate Gender Mainstreaming in the Forestry Sector in policy planning, program planning, and project planning, and planning activities. She added, that in 2011 Guidelines for Gender Responsive Planning and Budgeting were implemented. The responsive Gender Budget of the Ministry increases continuously since 2013. Furthermore, the Ministry moved upward from Category 3 (Madya) in 2014 to Category 2 (Utama) in 2016 within the Official National Gender Award of “Anugrah Parahita Ekapraya” awarded by the Ministry of Women Empowerment and Child protection.

Ms. Hadriani Uli Silalahi, SE, M. Si., Head of Foreign Affairs – National Council of Women’s Organization – Indonesia, KOWANI, highlighted the lack of access for women to get a good education and to get a well-paid job. Against this background, KOWANI offers training for raising the awareness and improve the knowledge of Gender Equality. In 34 Provinces KOWANI reaches more than 50 Million women, which are working with KOWANI together.

At the end of the panel discussion, a stronger commitment to the topic of Gender Equality was identified and addressed. The Civil Society, Indonesian Women Organizations, the academics, and the Government still need support to faces the challenges within this various and challenging field.

After the panel discussion the GIZ Indonesia, Timor-Leste and ASEAN Communication Gender Award 2017 took place. The contest helps to reinforce gender equality as an element of the corporate culture, encourage knowledge transfer by drawing attention to good practices, and motivate teams to implement the GIZ gender strategy.

The candidates evaluated by an impartial jury consisting of in-house and external experts taking into consideration to four criteria, such as: promoting gender equality (45%), impact and sustainability (30%), Gender and results based monitoring (15%), and gender as a quality feature of our work and Cooperation (10%).

Six proposals were submitted and four won one of the GIZ Indonesia, Timor Leste and ASEAN “Communicating Gender” prizes in 2017.

Check out the Communicating Gender Award for more information! GIZ members are invited to have a look at the Pictures at the DMS.