Which objectives and results has your initiative achieved? Describe the context, the organisational unit, the sector or the situation in your country or region. Tell us which approaches have proven effective, which results have already been generated and which specific impacts you expect in the short, medium and long term. 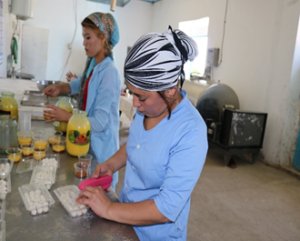 Tajikistan, as one of the post-Soviet Central Asian States, started its independent existence without significant gender disparities in education, literacy and life expectancy. Independence, however, brought huge economic shocks and civil disruption. While the consequences have been extremely difficult for all citizens, bringing poverty, physical insecurity and at times dramatic social changes and economic shifts, the overall effects of this overall transition have been particularly negative for women. This fact, i.e. that women have been negatively impacted by the political and socio-economic changes, the civil war and by the changes in the provision of state support, subsidies and loss of Soviet style state safety nets has been referred to as ‘Feminization’ of poverty in Tajikistan.1

For several years a strong disparity between men and women in terms of resources, bargaining power and decision-making and limit opportunities for girls and women to assert their full rights as citizens in Tajik society existed. Stereotypes of women reinforce a narrow picture of women as wives, mothers, and daughters-in-law, whose duties should revolve around the house and family. However, the predominantly male out-migration has resulted in women being forced to take on greater responsibilities within their households. Thus, the Government of the Republic of Tajikistan, in the name of raising the status of women, the actual realization of their constitutional rights and freedoms, increasing the common responsibility of parents for raising children, eradicating prejudices and harmful survivals, forming a healthy family, take effective measures and develop a state program “Place and Role of women in society ” by May 1, 2000. From that moment, the process of change is taking place, but in a developing country it is not easy to improve the situation at once. Especially in rural areas.

“The main problem in rural areas is the following: women do not have sufficient knowledge and understanding of their rights. Moreover, they lack the confidence to claim their rights and the courage to actually do something and change their situation. One needs to convince them with real life examples of other women who managed to do this in order for women not to be afraid of acting. We should really push them. I ask them: “Why are you so afraid? Think about it, you are doing all the labour.” If there were more role models for women to follow, it would inspire them. 2

Hence, nearly all international organizations that work in Tajikistan for development are planning their activities taking into consideration gender issue, i.e. empowerment of women. “Towards Rural Growth and Economic Resilience” (TRIGGER), project of GIZ Tajikistan following its predecessors (Programme Framework and Finance for Private Sector Development in Tajikistan, FFPSD and Growth in the Rural Economy and Agriculture in Tajikistan- GREAT) also deeply supports gender equality and women empowerment.

Our gender-differentiated approach and unfailing commitment to equal opportunities for everyone, regardless of their gender, sexual orientation or gender identity, are among the values GIZ upholds as an actor, partner and service provider for sustainable development. Is or has your work in the field of gender been particularly acknowledged by your clients, partners and commissioning parties? How is that reflected or shown?

GIZ implemented the programme “Growth in the Rural Economy and Agriculture in Tajikistan” (GREAT) since January 2013 to August 2016. The second programme phase, “Towards Rural Growth and Economic Resilience” (TRIGGER) commenced in September 2016 and continued till December 2018. TRIGGER II started from January 2019. Methodologically, it builds on the TRIGGER project, but has a stronger focus on market-based value chain approaches. In the ‘pull’ approach, the results logic is designed to increase the income of upstream MSMEs and smallholder farmers by strengthening lead companies with sales and export potential, based on explicit needs in target markets

TRIGGER and TRIGGER II are continuing implementing some of the activities that were already carried out during GREAT whilst also adding new activities. The TRIGGER module aims to strengthen the economic resilience of MSMEs, including smallholder farmers. Four outputs are defined which, when they interact with one another, enable the module objective to be achieved

Output 2 aims to improve the resilience of smallholder farmers.

Output 4 aims to improve the range of support available to potential young entrepreneurs up to age 35, with a firm focus on female entrepreneurs. The project considers the different realities of men’s and women’s lives by also tailoring advisory and information services to the needs of female-run farms and SMEs as well as women who potentially want to set up their own business.

The agrarian reforms, seasonal male labour outmigration, and the subsequent increase in women’s labour participation have facilitated changes in gender occupational segregation. Currently around 70-80% of farm labourers are women. Many women have to replace their migrant husbands in farm work at larger farm enterprises in order to maintain the flow of bene-fits in cash and kind necessary for survival. Women working at large dehkan farms have little bargaining power and remain trapped in low-skilled, low productivity and badly remunerated labour. Men, in contrast, are able to access higher income-earning opportunities, both on and off the farm, or through migration. Feminisation of agriculture has become a trend across the country. Transformation of the agrarian economy, therefore, is very largely about gender dimensions and the empowerment of women.

Therefore, in regard to gender TRIGGER’s objective is to “increase women’s participation in economic activities”. TRIGGER:

Overall, around 40% of TRIGGER beneficiaries are female, and we as a project staff try always to support them and adopt the measures that DO NOT HARM WOMEN.

Are the contributions to enhancing gender equality and reducing gender-based discrimination and disadvantages documented in the project? Are the results in the area of gender equality an integral part of the monitoring and evaluation system and systematically recorded and/or reflected in an evaluation report? Are the mechanisms for measuring results clearly documented?

Addressing gender issues are integral part of the M&E system of the TRIGGER project. At the result level the project insures that the 30% of smallholder farms and SMEs are led by women. Also, the project promotes female village advisors.  Collection of gender disaggregated statistic is included in M&E system of the project and its partners and their annual reports.

Gender equality cannot be achieved by individuals alone. It is a joint task – how did you go about it? Who did you cooperate with: colleagues, partners, donors, civil society representatives, etc.? What united you in all your efforts to enhance gender equality (shared or same goals, strategies, international or other obligations and requirements, etc.)? What were the major challenges you encountered individually or together? What were the three key success factors?

TRIGGER interacts with governmental, civil society, private sector agencies and other donor programmes and catalysing change in terms of tackling gender most effectively in order to achieve the Project’s overall objectives. TRIGGER II and its predecessor project (TRIGGER and GREAT) tried to involve as much female as possible. The project had female business groups and supported them to improve their business. Currently, gender is cross cutting issue for all the project indicators and we as a project staff do our best to adopt the measures.  Some of the key success factors are:

TRIGGER support local implementing partner Non – Cooperative SAROB to conduct “Young and Women School of Agronomist”. SAROB decided to involve women agronomists during capacity building to provide fee-based agriculture advisory service in the future. This activity helps to increase the number of women entrepreneurs in agriculture advisory sector. Additionally, it will increase the number of women advisers at SAROB. In 2019 Sarob, will improve the knowledge of 20 new women and involve them for the advisory business. It is planned to organize one training session at the end of 2019.

The project support female village advisors to establish and develop their business. Project support them to build their capacities on business and agro – technical knowledge, legal issues, etc.

Gender equality is a key value and part of how we see ourselves. Describe your contribution, i.e. the measures, processes and/or approaches you use to make gender equality visible as part of our corporate culture and to champion it both internally and externally as a goal in itself and as a principle to guide action.

For the gender specialist or a gender focal point it is always difficult to work alone and to promote this cross-cutting issue within the organization and outside. More challenge is faced externally, while targeting beneficiaries. There are regional varieties in the extent of restrictions to mobility and group formation for women and girls. Some rural communities do not support women joining land management committees, in others even informal gathering, sharing of information and forming social ties for water, fire-wood or herb collection carry stigma for young women. The most important approach is capacity building. To train both women and men about gender equity and equality, and ensure them on the economic and social benefit, helps to achieve the goal. We succeed in most cases only when we talked to both men and women, when men understood that our support and encouragement is only for the community and family development.   We always present the importance of gender issue within the project and indicate the “increasing women’s participation in economic activities”, as one of the key objectives.

Several years ago, not all GIZ staff in Tajikistan were aware that a GIZ gender strategy exists. The projects implementations result, and the gender focal point efforts shows that within the organization itself the gender strategy is now followed. While recruiting new staff and beneficiaries, gender balance is always taken into consideration.  In the past, even no distinct efforts were undertaken to focus on women’s staff development. Following the predecessor’s projects rules, TRIGGER’s management is rather flexible to allow staff to attend to important family matters although no formalized system for flexible working hours exists. This now applies nearly for the whole of GIZ Tajikistan.

Gender equality cannot be achieved by individuals alone. It is a joint task – how did you go about it? Who did you cooperate with? What were the major challenges you encountered individually or together? What were the three key success factors? What were the outcomes?

Gender equality is a cross cutting issue, so theoretically it covers nearly all the components of the programme, but in practise it needs special efforts and support. Within the organization the management support is very important. Within TRIGGER the management is highly supporting the ideas and activities that are planned for the gender equality.

Some of the challenges we faced with are:

However, we are succeeding and following are some of our outcomes: 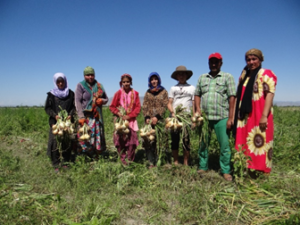