Rwanda: Tackling Gender Inequalities and Multiple Discrimination through promoting the Concept of a diverse and inclusive Workplace to owners and managers of companies in the Rwandan Energy Sector

At GIZ Rwanda the vision of tackling gender inequalities and multiple discrimination in the Energy Sector needs an inclusive attitude.

In order to start changing the attitude of people working in the energy sector, the Energising Development Program in cooperation with the One Mainstreaming Team decided to let action take place. Action in form of a project promoting the concept of a diverse and inclusive workplace and its advantages to owners and managers of companies in the energy sector.

This project was perceived as very inspiring and eye opening. It also led towards requests of further workshops including local communities as well as a booklet to be a source of inspiration for participants from the private sector as well as GIZ colleagues when adapting and contextualizing the project to other sectors and countries.

Rwanda’s energy consumption is amongst the lowest in the world. According to the Rwandan Energy provider REG, 38% of the population has access to the electric grid and 14% with off off-grid solutions in rural areas. Although larger industries are being connected to the national grid, most small businesses in rural areas remain without access to electricity. Kerosene lighting is widespread, causing high energy costs and negative health impacts for rural households.

The Rwandan Government is working to improve energy infrastructure by developing hydropower, methane gas and solar energy as well as off-grid technologies.

The Energising Development Program of GIZ (EnDev) focuses on the private energy sector and provides technical, business management and financial support to consolidate the participation of private Mini Hydro Power Project developers in the hydro sector.

Since there is a very relevant connection between the realization of energy projects, e.g. hydropower projects and questions around Gender, diversity and inclusiveness, EnDev decided to take action jointly with the One Mainstreaming Team of GIZ Rwanda. Together, they wanted to raise awareness on the importance of a diverse and inclusive workplace, thereby considering questions of gender equality, sexual harassment as well as potential unintended negative impacts the construction of hydropower plants could have on women and HIV prevalence rates in the respective communities.

The construction of a hydro power plant usually takes one to three years and requires a labor force (100 to 200 people) that consists mostly of technical staff coming from other parts of the country. Mobile laborers spend much time away from their families and money circulates around the construction site, which leads to an increase of casual sexual relationships, including sex work, mainly affecting women due to poverty and lack of opportunities. This in turn increases the risk of HIV among the construction workers and in the community where the power plant is built, especially considering the high prevalence of HIV (over 50%) among female sex workers in Rwanda. To mitigate the risk that energy companies are contributing to gender inequality and the spread of HIV, the importance of workplace policies needs to be highlighted as it contributes to the protection of its employees as well as the ‘host’ community, especially women.

There is no simple narrative on gender in Rwanda. The policies and strategies on gender equality are quite progressive and ensure equal opportunities. Despite this, the society is still characterized by a deep-rooted patriarchal structure and more traditional norms around gender, masculinity and femininity prevail – such as the belief that women should be modest, shy and soft spoken.

Women’s responsibilities are traditionally related to reproductive roles (i.e. caring for the family and the home, collecting firewood, fetching water and cooking). Linking this reality with the fact that so far a small proportion of the rural population has access to electricity, it is necessary to especially include women as well as women facing multiple discrimination such as having a disability or living with HIV/Aids when improving the energy infrastructure of the country.

Even though a better energy infrastructure should have mainly positive impacts there might be unintended negative impacts as the ones mentioned above.

Against this background and the fact that companies in the private sector have very little awareness on the topics of diversity and inclusion, GIZ Rwanda’s One Mainstreaming Team jointly initiated an awareness raising project with the Energising Development Program promoting the importance of a diverse and inclusive workplace to managers and company owners in the Energy Sector.

The idea of the pilot project was raising awareness on the importance of a diverse and inclusive workplace considering questions of gender equality, sexual harassment and the leave no one behind concept amongst managers and company owners in the energy sector, in order to support them to become inclusive employers. The pilot project trained owners and managers of several Rwandan companies in the energy sector, and developed a booklet to enable them to follow up on the topics. In addition, further activities requested by the companies after the initial workshop have been organized, such as workshops about HIV prevention bringing together construction workers and people from the communities near the construction sites.

The workshop concept was specifically designed for managers and company owners, not only based on GIZ mainstreaming concepts, but backed up by Rwandan laws and policies on diverse and inclusive workplaces. It emphasized the responsibility of Rwandan companies and aimed at increasing ownership. The workshop explained Rwanda’s commitment for inclusive development and provided “business arguments” for a diverse workplace. Managers and company owners were introduced to the following topics:

This workshop was designed in a way that offers not only an opportunity to address the topics separately, but also to discuss multiple discrimination women are very often facing. It also provided first practical ideas for tackling these issues.

Lively discussions and several questions followed the introductions, which were eye openers for the participants.

The demand for further information led to a booklet that explains diversity and the concept of a diverse workplace, focusing mainly on Gender Equality, Sexual harassment at the workplace, HIV and Inclusion of people with disabilities. The booklet helps the companies to adapt the concept to the situation and needs in their respective companies.

Two company owners were profoundly shocked by the relation of construction sites of hydropower plants and women in the communities being exposed to sex work as well as the risk of an increase of HIV infections around construction sites. They asked for support to organize awareness raising workshops at the construction sites integrating the people of the community. This demand brought GIZ Rwanda’s Rights-based Program and its partner organization Rwandan Network of People Living with HIV (RRP+) on board. RRP+ is a Rwandan civil society organization working with people infected and affected by HIV as well as HIV prevention. RRP+ organized workshops on HIV prevention together with a local health center, EnDev and the companies.

The workshops were organized in an inclusive way bringing together construction workers and community members living close by the construction sites. Women from the community were especially encouraged to participate because of the above-mentioned risks they are facing.

Open discussions involving a person infected by HIV giving a testimony as well as the huge number of questions demonstrated the immense interest of participants. They requested further workshops on different topics around Gender and HIV affecting them, which are expected to be organized together with the EnDev Focal Person and the One Mainstreaming Team.

In the aftermath of the workshop the local health center then followed up on an individual basis with the women and men, who were interested in further information or HIV testing.

Since the EnDev Focal Person is in regular exchange with company owners and managers further exchange on the topics as well as further workshops to be organized jointly with the One Mainstreaming Team are expected as medium and long term impacts.

Contributions enhancing gender equality are reflected in the One Mainstreaming Analysis of the program and they are systematically monitored and documented.

The biggest challenge was to stimulate interest for the topics and their importance among company owners and managers. Persistent persuasion of the One Mainstreaming Focal Person led to the first success that the company owners and managers participated in the workshop. In addition, collective efforts were necessary to present the topics in a way that people from the energy sector recognize their importance.

1.The project benefitted greatly from the experience of the GIZ One Mainstreaming team and its advisory services to GIZ programs in Rwanda.

3.The convincing data and testimony on the issue helped to get managers of the companies to commit to follow-up activities.

The One Mainstreaming Strategy of GIZ Rwanda and firm commitment of management and staff united us in the implementation of the activities.

This project initiated cooperation with private companies in the energy sector, as the project is targeting to start changing the mindset of managers and company owners with regards to more inclusive and diverse work places. A strong cooperation between the One Mainstreaming Team and the Focal Person of the Energising Development Program was needed to prepare and adapt the topics to the specific background of people working in the energy sector as well as raising interest among managers and company owners. Given the time constraints and the fact that topics around gender equality and inclusiveness are non-core activities of energy companies it was an enormous success that they not only participated, but also asked for further activities and a booklet in order to follow up on the topics that participants perceived as eye openers.

In order to support companies with developing and organizing workshops taking place at the construction sites, the One Mainstreaming team got the Rights-based Program and its partner organization RRP+ on board. The urgent need of involving RRP+ and local health centers was very clear to integrate a rights-based perspective and follow up on individual needs of women in the community.

This project following the above-mentioned approach of sensitizing people in the private sector for topics often considered as peripheral issues as well as the cooperation among different GIZ units and programs, private sector companies, civil society organizations and public institutions has made this project a transferable one that can be adopted in other sectors and other countries GIZ is operating in.

In order to increase acceptance, the project adaption should consider national laws and (sector specific) policies as much as possible. Alternatively, international agreements (e.g. ILO) could be taken as references. 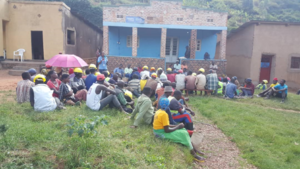 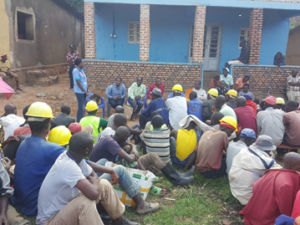 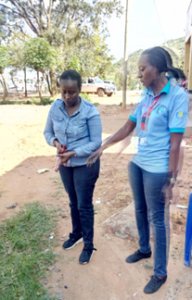