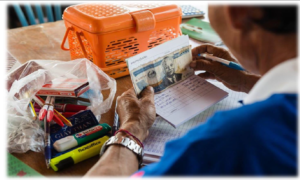 The GIZ “Microfinance in Rural Areas – Access to Finance for the Poor (AFP)” is part of the Lao-German Development Cooperation and commissioned by German Federal Ministry of Economic Cooperation and Development (BMZ), implemented through GIZ (Deutsche Gesellschaft für Internationale Zusammenarbeit) together with Bank of the Lao PDR (BoL) and co-financed by the Australian Department of Foreign Affairs and Trade (DFAT). AFP has been supporting the development of village banks in the Lao PDR since 2009. It is currently active in 27 districts within 6 provinces. As of July 2018, the project has established 7 Microfinance Institutions (referred to as NSO-Network Support Organizations) and reached more than 112281 rural members through 747 village banks (VB). Economic development is the key to growth as well as poverty alleviation and reduction. But economic growth without gender equality cannot be sustainable.
In 2018 GIZ-AFP created a gender strategy and gender analysis to ensure gender equality is an essential factor in achieving sustainable change and is therefore one of the key values on which AFP´s work is based. Gender-differentiated procedures and consistent efforts to ensure that women and men enjoy equal opportunities are among the features that define the quality of our work. Equal access to and control over finances for women and men is a vision of the project.
AFP is furthermore actively supporting its Government partners to enhance their gender competencies and therefore to reach their own, as well as mutual, objectives for gender mainstreaming and equality. The strategy aims to strengthen gender equality both in the services AFP delivers and within the project team itself. The strategy addresses AFP staff members first and foremost. It is up to them to put the strategy into practice. Beyond this, the strategy also serves as a basic source of reference and guidance for AFP´s development- and Government partners.

Gender as a quality feature of our work:
AFP`s management and steering structure reinforces the binding nature of the gender strategy by giving it a key role in steering and implementation processes. AFP has an appointed gender focal point who has the full support of the steering team to put gender on the agenda of all meetings relevant to decision-making, steering, monitoring, and reporting.
Gender pays off – that is the overall message of the GIZ Gender Strategy, and accordingly the message AFP´s gender strategy aims to get across. It reflects the values of GIZ, as well as AFP´s development partner DFAT, the Bank of Lao PDR. Considering gender equality makes AFP´s work more effective and achieves more sustainable results. Inside the project, equal opportunities pay off because experience indicates that mixed teams achieve better results. The management sees, promotes, and rewards efforts to promote gender equality. This includes day-to-day management and implementation as well as special events and opportunities. Efforts are put into a gender-sensitive communication within the team, with partners, as well as towards the target group and the wider public.
To ensure gender equality at workplace AFP hired a gender specialist to responsible for responsible for supporting gender mainstreaming in GIZ-AFP projects and in implementing partners, such as the Bank of Lao PDR and Lao Micro-Finance Association (LFA). This includes: providing specific advice on gender strategy and policy to the Bank of Lao PDR; ensuring that all recommendation from project’s gender strategy are implemented; and providing gender training for project staff and Staff of Network Support Organizations (NSOs), like Bank of Lao PDR.

Gender and result-based monitoring:
Gender is a primary marker of social and economic stratification and, as a result, of exclusion. Regardless of one’s socioeconomic class, there are systematic gender differences in material well-being, although the degree of inequality varies across countries and over time. As a result, gender inequality is a characteristic of most societies, with males on average better positioned in social, economic, and political hierarchies.
The strategy has been developed with the stakeholder such as DFAT, BMZ Strategy, Lao gov’t at the provincial, district and community level.
Monitoring and evaluation is important because it allows us to look beyond inputs and activities to focus on development changes that may occur as a result of contributions made by AFP interventions in targeted areas.
The M&E Plan is one of the most important tools used in AFP and is the main plan for monitoring results. The M&E Plan is a simple guiding framework that outlines all the key information regarding each level of results, performance indicators and represents the overall monitoring plan and schedule for the project.
This focus on development changes, also includes changes in women’s empowerment, gender relations, women’s and girls’ access and control of resources as well other gender equality results that our projects aim to promote.

Cooperation:
As gender equality cannot be achieved by individuals alone. The output of the project#5; Gender empowerment. Gender is mainstreamed in all the outputs. The impact hypothesis is that women in management positions, especially in the board of directors and in the village banks committees are an important role model within their communities. This will help to reduce psychological hurdles and make access to financial services of village banks more accessible for women. More single female accounts will allow women to independently safe money. The Bank of Lao PDR supported to gender mainstream these strategies, in which the project is actively involved to developed them. With regards to financial education the assumption is that through continuous business coaching and family consultations an improvement of the business goes hand in hand with more equal decision-making power on households’ level. Gender mainstreaming and promoting gender equality in development projects is recognized as an efficiency factor that creates a virtuous circle for sustainable economic and social development, social justice, and equality. AFP work to promote gender equality with the Bank of Lao PDR as a main partner from the Lao government, Department of Foreigner Affair and Trade, government of Australia as a co-donor and local authorities to support and ensure gender equality in all the network support organizations (NSOs) and village bank.