Portfolio of GIZ Kyrgyzstan has a project that works on a regional level with the goal of ensuring equality for all in legal system – Rule of Law. This project is important because it ensures that no person can be treated above or below the indicated legal system which leads to fairness. Considering such goal, it is essential to include gender equality in the system as well. Therefore, project specialist who is also a Gender Focal Person of the project took idea of gender equality and digitalization, combined and created such tool as Unified register of crime and minor criminal offenses.
Idea behind this tool in the beginning was ability to have a centralized system serving the entire process of pre-trial proceedings on crimes and minor criminal offenses with 7 law enforcement agencies working in the system. Such system with more than 3000 users for the moment across the whole country allowed in short period of time for better registration discipline, transparency and human rights safeguard.
Within the broader framework of developing such IT solution for all crimes and minor criminal offenses, the better statistics for sexual and gender-based violence is now possible. The development of more gender sensitive forms and directories to allow for better safeguards for the victims of such crimes is now in process.
As a result, now we have a digital tool that shows have many women and on what circumstances became victims of crimes. In the nearest future, the improved system will allow for better (disintegrated) statistics to know more about victims and perpetrators, which in turn will allow for more adequate policy measures. Having an IT solution for collecting data on sexual and gender-based violence is the first important step in comprehensive approach against such crimes. This collected data will help to create different measures on different levels for prevention of gender-based crimes which will cannot be tolerated today in any form.
Below you will can see screenshot from the tool.
Please note that orange line is the amount of crimes in families the victims of which are women. The number speaks for itself. Therefore, tool only shows the realities. We hope that more data will be collected, more people will be interested in unjust situation and more actions will be taken. 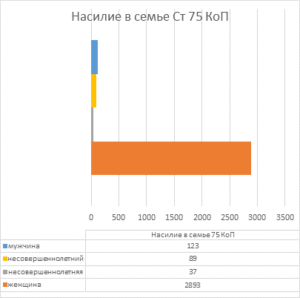