Background
In 2012 the Jordanian Ministry of Environment and the German government with its implementing agency GIZ have established a partnership for contributing to Jordan’s ambitions to achieve sustainable development and protection of the environment. The partnership has since then expanded into multiple common projects and activities.
Based on the financial support from the German Federal Ministry for Economic Cooperation and Development (BMZ) and therein the Special Initiative for Tackling Root Causes of Displacement, GIZ is implementing the project Improvement of Green Infrastructure in Jordan through Labour – Intensive Measures. The project aims at establishing and improving public green open space networks in urban, semi-urban and rural communities throughout Jordan. The works are implemented with the help of Jordanian (50%) and Syrian Cash Workers (50%), out of which 20% are women. The project provides them with temporary income to alleviate immediate financial pressure on one hand, and to improve the living conditions in the refugee hosting communities on the other hand.
Green infrastructure is a term used to describe the network of green open spaces in a specific area. They include parks, forests, fields and waterways, green corridors, walkways, trails and public squares. These elements are linked to each other to form part of a wider network, which helps to withstand climate change and other pressures.
Green Infrastructure as a planning tool provides areas for recreation, education and wildlife habitat, as well as environmental services such as flood protection or absorbing air pollution. These natural and semi-natural areas are part of the basic “infrastructure” that enables us to live as we do. 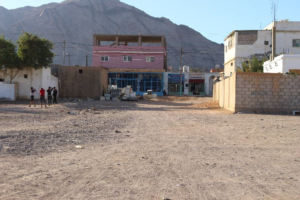 One of the projects implemented is a small neighbourhood park in Qweirah in the south of the country. Located along the desert highway, 55 km from the city of Aqaba, Qweirah’s originally Bedouin population was and has settled there over the past generations. With having natural resources being scarce in the area, the town suffers from a poor environment and economic hardships. About 20 years ago, an international donor organization built a neighbourhood park for the people of Qweirah. This park, however, was not opened for a single day. According to discussions with local representatives, the concept of a park as a public space had not been a common concept in Qweirah. The community then was not involved enough to be able to understand its benefits and rather saw it as a potential space of danger, including the formation of gangs etc. The park had thus become deserted and fenced area, while the municipality however was still taking care of the trees to survive.

What makes this project special?

The collective cooperation and equal access to public space

When embarking on the project with AVSI1 foundation, one of the project’s partner organisations, it was soon clear that the dormant park could only be revived through a collective effort; providing a new design or a rehabilitation measure without a discussion and appropriation process would not have sufficed. Public debate, in the communities at large, is a key to the success and functioning of green public spaces. The Cash for Work Green Infrastructure project (CfW-GI) has thus formed a social unit within its management structure that caters for partner support in the field of public participation for the choice and design of public spaces, Mental Health and Psychosocial Support (together with the respective project in Jordan) and in setting up feedback mechanisms for the cash workers inside the national institutions, in addition to other relevant social services. The project also supports social cohesion, not only between the participants and the community they work for, but also between Syrians and Jordanians.
Through intense community participation and thanks to a local NGO, JOHUD2, that supports the women of Qweirah, AVSI foundation succeeded to raise interest for the importance of public space. This was just possible due to a close cooperation between the partner organizations and the community, sharing the same goals and visions of creating a safe space for everyone, including women and children. Nevertheless, it was the women of Qweirah who ultimately realized that this place would be of great benefit for them and their children, as there is no other place for them to go, gather and socialize. Children used to play in the streets, and not being a safe space, mostly girls did not have a place to go to and play. But also for boys, possibilities were limited.
After all the participatory process made sure that the park was embraced by the entire community, and thus regarded as a safe place, particularly for women and children. 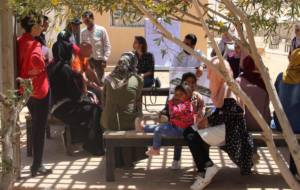 Driver of the successful process was the participatory approach to design the park, where women were asked to address their needs and share their ideas as equally as men from the start. In the beginning, the community participation events were held separately for men and women, however, through the intense discussions and meetings with the mayor, tribal leaders, and female representatives of the community, soon a meeting was held together with both genders; a very unusual event in a very conservative environment. 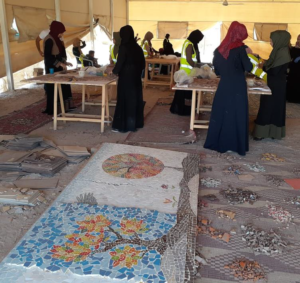 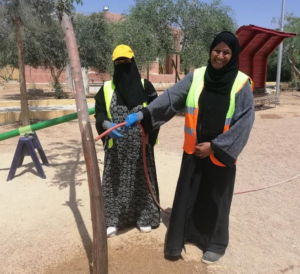 A major contribution to the appropriation of the park, was the involvement of women in the production of special design elements in the park that provide its contextual identity. It all began with the weaving of traditional shade structures, guided by a very active woman of the community who taught this ancient technique to the other Jordanian and Syrian women. Later, a training in mosaic laying was added that sparked off creativity and provided the colour needed for a park in a desert environment. The appearance of the park thus is strongly shaped by the women’s work. The knowledge introducing the crafts was passed on to other groups of women who joined the project later and thus created momentum in the village of Qwierah. The women were not only able to earn money which they need to support their families and were economically empowered but were also empowered to create access to the labour market, and most importantly to gain self-esteem and to some extent responsibility for their own actions.
By now, the women have officially formed the maintenance committee for the park in collaboration with the municipality. The mayor, as well as the tribal leaders of the community, fully accepted the set up and are actively supporting the women’s initiative. In addition, the park is always clean, and all its planted trees have survived despite the hot climate. The park is a non-smoking place and is heavily used and appropriated by the women and their children alike.
The project is a great success in the promotion of equal access to public space. At the same time, it plays an important role in terms of participation of women in the decision-making process of the community. It was their initiative to form a group and help with maintenance. Maintenance plans that further involve the women are currently developed together with the municipality to ensure the positive attitude towards the park. 44% of the cash workers in Qweirah until now are women exceeding by far the number aspired by the project (20%). Now the park is jointly run by the women’s committee and the municipality which reflects the respect and trust that women gained during the process from the mayor, the municipality, and the tribal leaders.

While men and women were equally encouraged to activate the site during the design and implementation processes, it was the women to further take leading roles – even to a greater extent than men – and actively engage with their ideas and skills for the creation of the park’s identity, by implementing their visions and aspirations for better living conditions in Qweirah. This was proven again, when women in Qweirah established their first business (a cafeteria) to be run by women inside the park. This idea was realized with the further support of AVSI foundation and AICS3 through their project “Fursa4” in the management and operation of the facility.
As another result of the park’s success, the women of Humaymah, a neighbouring village to Qweirah, have asked to also have their unused park renovated. This project has been taken up by GIZ and AVSI and is currently implemented with great engagement of the established know-how by all participants. 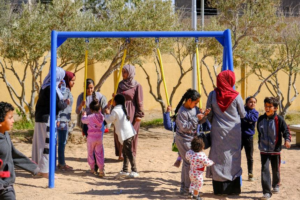 The process of creating a safe space

As mentioned above, in the cultural context of Qweirah, children traditionally play in the streets, which due to increased traffic and increase of population has become dangerous. Particularly girls are frequently not allowed to play outdoors while many women are not allowed to leave their houses without male accompaniment or only under urgent circumstances. This challenged from day one the presence of women and girls and their participation in the rehabilitation process of the park.
It was important therefore, to yet value and celebrate local cultural and social norms and values, while to still promote equal access and the right to decide on the space and its utilization commonly. It was thus sometimes important to offer different formats of participation, listening to needs and aspirations equally. This way the designs took up ideas from men and women alike. The community however, through this common process, soon realized that the needs of children and women to have a safe place to go to were prevailing. Another challenge was implementation itself: it is normally not acceptable that women work in public and together with men in the same place. It was decided that men would be working inside the park, while the women gathered in the community centre run by JOHUD, which was safe and ensured also the provision of childcare.

All this, in addition to using local techniques and materials, helped to create a strong sense of ownership for the first time for a public space in Qweirah and now also in Humaymah. The process greatly contributed to an improvement not only to the space itself, but also to the physical and psychological wellbeing, mostly to the women and children of the town.
On July 2nd this year, a meeting between the municipality and 32 women was held to discuss the park’s further developments and goals. The maintenance committee, consisting of female cash workers, decided to reschedule the work in two shifts (two women working in the morning and two women working in the afternoon) to sustain the durability of their park.
Today, the public face of Qweirah’s only park has changed because of women’s initiatives. Ever since they have been challenging more norms. for instance, traveling quite far away from their homes to attend a training for one month in a textile factory in Aqaba. Despite not being paid for the training, many women were motivated enough to self-organize themselves to go. Accordingly, more trainings for women in textile and mosaics production in the last few months were offered for the rehabilitation of a second park in Qweirah. It is another way of continuing the success story of the great women of Qweirah.