1. Promotion of Gender Equality in the GIZ-EAC Programmes

An important objective of the GIZ programmes supporting the EAC Integration Process is to ensure that women in the region are actively contributing to the integration process, for example through cross-border trade.
The GIZ EAC Programmes support women in business through
(1) Supporting the implementation of four measures of the EAC Strategic Plan 2016 for gender that are relevant to the promotion of gender equality,
(2) Upscaling women-led SMEs in the East African manufacturing sector and
(3) Supporting the EAC to adopt border governance strategies that consider gender concerns, especially for the women cross-border traders.
As a result, the EAC region has seen an increase in the formation of Women Cross-Border Traders’ Associations. These associations include: Busia, Elegu, Malaba Women Cross Border Traders Cooperative Associations and the Women Shea Butter Association. These associations are addressing challenges hindering cross-border women traders in the region. The measures, such as enhanced availability of information on regional trade regimes, rules and regulations as well as trainings have led to increased EAC Women Entrepreneurs’ participation in regional trade, smooth passage of women traders though border points and the adoption of an EAC Gender Policy.
Through capacity building and B2B activities of the Global Project Creating Perspectives, 14 women-led enterprises in Kenya, Tanzania, Uganda and Rwanda have been enabled to grow their businesses and have made both regional and international trade and matchmaking contacts.

1.1. Context of the Initiative

Women in the EAC region constitute more than 50% of the population and their role in boosting social and economic development of the region remains untapped. The majority of female cross border traders in East Africa operate informally1 and are restricted in their activities, mainly due to lack of information on trade regulations, safety issues and harassment at border crossing points. Lack of information makes women informal cross-border traders vulnerable to harassment when crossing border points and reduces their trading power. EAC women engaging in cross-border trade contribute to poverty reduction, improved family welfare and income, mitigate the impact of conflict and violence by creating employment, thus enhancing income and food security for their families and communities. As found out by the United Nations Conference on Trade and Development (UNCTAD), “Informal cross-border trade supports livelihoods, creates jobs and contributes to food security, eclipsing even formal trade at certain border posts. Enabling cross-border traders – most of whom are women – to flourish and to integrate into the formal economy would not only support gender equality, but would also boost trade and the private sector and, in turn, economy-wide growth and development.3i”
To address the above challenges of the women cross border traders in the region, the GIZ programmes supporting the EAC are implementing several measures to foster the economic capacity of women-owned enterprises.
The EAC-GIZ Support to East African Market Driven and People Centred Integration (GIZ-SEAMPEC) established the Incubator for Integration and Development in East Africa (IIDEA) to support among other women cross-border traders to scale up their businesses in two or more countries4. This enables them to effectively engage in and benefit from the cross-border trade opportunities available in the region with the Simplified Trade Regimes (STRs.
The GIZ support to the African Union Border Programme (GIZ-AUBP) complementarily with GIZ SEAMPEC and IIDEA worked with the EAC Secretariat to capacitate the women cross border traders through availing simplified information package on the STRs in English and local languages, and training both the women cross traders and the border officers on the STRs. This creates an enabling environment for women cross-border traders at the border points, builds trust and common understanding between the women and the border officers, and decreases harassment risks at border points while improving the management of borders which is instrumental for regional integration.
Through the Creating Perspectives Programme, 14 women-led SMEs have received support so far. According to their specific needs, all companies received trainings, some were also included in intense coaching sessions and delegation trips to trade fairs in Germany. These activities enabled the SMEs to create 196 new jobs and upscale in terms of geographical outreach, customer base, turnover and investments.

1.2. The Approach
Three different GIZ programmes supporting the East African Community integration worked together towards the promotion of gender equality and equity in the region. They supported the EAC to develop and adopt important policy frameworks including the EAC first gender policy, a draft gender barometer and the conducting of the second gender audit to inform its gender mainstreaming efforts. The GIZ programmes ensured the participation of all relevant stakeholders in promotion and empowerment of women cross-border trade. These include, for example, the East African Women in Business Platform (EAWiBP) and its umbrella associations and networks, the EAC Secretariat, Organ and Institutions and Civil Society Organizations. The cooperation of the various stakeholders created synergies and pooling of competences, making sure that the objectives were achieved.
1.3. Possible Impacts in the Short Term, Medium and Long Term
Short to medium term expected results:

▪ The number of women successfully heading enterprises in the manufacturing sector will grow, leading to a more balanced gender structure in that sector.

2. Gender Success Stories in our work
A proactive culture of jointly celebrating the international women’s day at the EAC headquarter generated positive results such as improvement in the maternal services at Mt Meru Hospital in Arusha, Tanzania, improved working conditions at the Soko Kuu Market in Arusha Town, Tanzania and enhanced social and economic participation of (Masaai women) in cross border trade and integration process in general.
The positive impact of IIDEA initiatives to support women cross-border traders is testified by the quarterly reports of IIDEA partners, reports to Partner States and Council of Ministers of EAC as well as joint articles and press releases on gender and women empowerment projects. Women talked about the improvements made to their household, families and welfare as a result of the support provided for enhancing their cross-border trade through the impact video and several success stories.
A great success story from the Creating Perspectives programme is the collaboration with Line Plast Group Ltd, headed by Mary Ngechu from Nairobi. After taking part in trainings on export preparedness and Human Resource, receiving a coaching on ERP systems by the Federation of German Engineers (VDI) and delegation trips to Hannover Fair and K-Fair in Germany, Mary Ngechu has been able to create 86 new jobs, raised her turnover by several millions, expanded to Ethiopia and Rwanda and managed to increase her customer base. Moreover, she started the initiative “Takataka ni Mali” (Swahili for Waste is Wealth) to support the creation of green jobs and entrepreneurship development in the untapped field of solid waste management. She trained women to come up with different products from recyclable products such as bags made from 100% recyclable material. Especially youth and women are being trained on segregation of waste for purposes of value addition and linking them to recyclers. She has managed to equip them with entrepreneurial skills, for example tailoring, hairdressing and baking.

3. Cooperation
The measures to empower women cross border traders and to advance the gender agenda in the EAC region are a joint effort between the GIZ-SEAMPEC, GIZ-AUBP and the GIZ-Creating Perspectives Programmes that contributes towards fulfilling their gender impacts indicators. Partners involved in the gender work included the EAC Secretariat, Organs and Institutions, the private sector, women regional business associations and organizations at regional and national levels, other development partner such as Trade Mark East Africa, International Trade Centre (ITC), Border agencies, Business members organizations (BMOs) and East African civil society organizations as well as its umbrella bodies.
GIZ-SEAMPEC developed the gender policy, GIZ-AUBP availed the simplified information packages on cross border and jointly the programmes conducted training for cross border traders’ associations. This was possible thanks to the joint workplans and shared target stakeholders promoting women agenda in the region and working closely with our partner the East African community Secretariat and its Partner States.

3.1. The Challenges Faced collectively
The following challenges featured prominently:
1. The budget allocated to the EAC Gender Department is very low. There is only one Principal Gender Officer who handles also areas such as youth, community development and people living with disabilities;
2. Lack of data and statistics on gender from the EAC Partner States hampers the development of policy documents, for example the completion and adoption of the gender policy documents, such as the EAC Gender Barometer and the EAC Second Gender Audit.
3. Fragile relations between border officers and women informal cross -border traders Most cross-border women traders work at very remote border crossing points and are difficult to reach.
4. Gender is not a priority area for a lot of manufacturing companies, though many companies already see the huge potential of a more diverse and inclusive personnel structure.

3.2. Three Success Factors
1. Growing interest by women traders and stakeholders supporting women to conduct formal cross border trade in the region is commendable.
2. Strong recognition of the GIZ-EAC Programme technical expertise and cooperation with the EAC Secretariat facilitated easy buy-in and approval of the policy documents developed and adopted
3. Available financial and technical officer for gender from the GIZ-EAC programme side facilitated the effective lobby and convening of the gender joint workplans and its reviews.
4. Availability of the simplified information packages on cross border trade in local languages
5. Joint training of cross border women traders and border officers.
6. Successful results from IIDEA partners have been an incentive to increase support and attention to the gender and youth agenda in the integration process.
7. Working with umbrella women business platforms and associations promoted ownership of the different activities and dissemination of information packages.
8. Close and trustful relations between GIZ programmes and the partner EAC secretariat, specifically the gender unit. 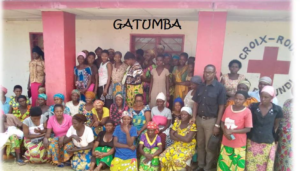 COCAFEM-GL is a regional organization created in 2001 by women organizations from three countries, namely: Burundi, Rwanda and Democratic Republic of Congo. The umbrella intervene in the promotion of women’s rights, gender promotion, women participation in governance, political leadership, Peace and security, economy and fight against sexual and gender based violence over 16 recent years. 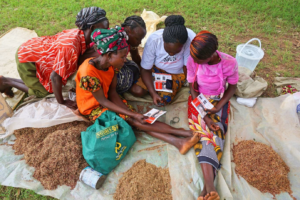 Sauti Africa empowers cross-border traders to exercise their rights as citizens of the EAC – able to trade legally, safely and profitably across borders and stand up for their rights. Through SMS/USSD-based platform, traders can access tailored trade and market information, including border procedures and documentation requirements, exchange rates and market prices for commonly traded commodities. The platform also allows traders to anonymously report incidents of bribery and harassment at border crossings. 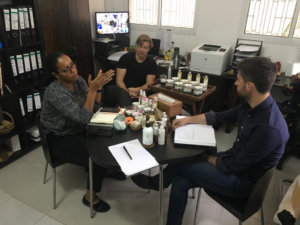 Coaching of Cheherazade Cheikh, the CEO of the cosmetics company Inaya Zanzibar, by the Federation of German Engineers on optimization of data management and the introduction of an ERP system. Inaya Zanzibar is constantly growing and mostly employing women in their production. 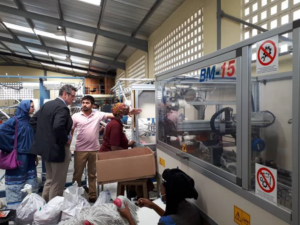