Colombia: THE COLOURS OF POST-CONFLICT

A MEMORY PROCESS WITH LGBTQI VICTIMS OF THE ARMED CONFLICT 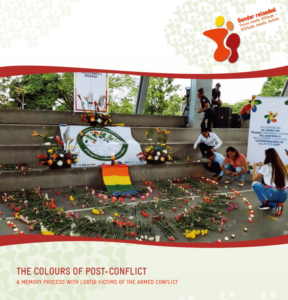 Despite the advances on LGBTQI rights in Colombia, there is still a widespread lack of knowledge about the impact of the armed conflict on members of the LGBTQI community. Discrimination and homophobia, which were fueled by armed actors during the armed conflict, have generated fear and distrust among this community. As a result, many people are afraid of self-identifying as gay, bisexual or transgender, afraid to speak about the physical and psychological impacts of the conflict and to seek reparation. The project “Support for Peacebuilding in Colombia – ProPaz” implemented by GIZ on behalf of the German Ministry for Economic Cooperation and Development is promoting gender justice and a clear policy of leaving no one behind including the LGBTQI community.

To facilitate and guide its work Pro- Paz has developed a gender strategy and conducted an intersectional analysis to analyse and be able to address the diversity within the LGBTQI community. In order to create awareness and stimulate a debate ProPaz together with the governor’s office of Meta and different LGBTQI organizations organized a football tournament on the commemoration day of LGBTQI victims of the armed conflict in April 2018. This was followed by 4 workshops in 2019, which aimed at documenting 20 cases of victimization and constructing a common narrative about the impact of the conflict on the LGBTQI community. 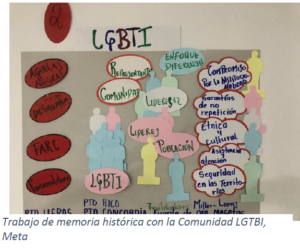 Choosing a facilitator from the LGBTQI community fostered a sense of ownership and created the trust necessary for participants to speak – many of them for the first time – about their experiences during the armed conflict. This process was complemented by a strong psychosocial component. ProPaz also worked closely with entities of the transitional justice system, including the Special Jurisdiction for Peace (JEP) and the Truth Commission (CEV). In addition to regular M&E tools, ProPaz is currently developing a guide to support measuring the impact of its gender activities, including this process, and collect and document best practices. 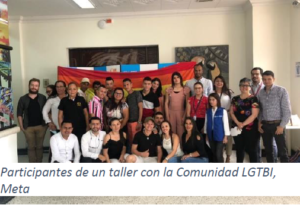 Thanks to its work with the LGBTQI community in Meta, ProPaz was able to support LGBTQI victims in their rights to reparation while highlighting the complex situation of this community both during the conflict and in its aftermath. Participants were empowered to continue building a conflictnarrative that reflects the experiences of LGBTQI-identifying persons. On the other hand, Governmental and judicial entities were sensitized to the needs of this population in the transition process. In the long run, this process is expected to contribute to the sensitization of society about the rights of sexual minorities and an improved partnership with LGBTQI advocates. LGBTQI organizations, governmental and judicial entities have come to see GIZ as a trustworthy partner and important actor guaranteeing the victims’ rights and supporting an inclusive transition process.