Colombia: Pathways to Equity and Peace in Colombia 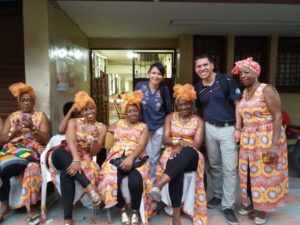 The Colombian armed conflict has had a devastating impact on society and has caused innumerable victims. The consequences have been particularly severe for women, reinforcing the conditions of vulnerability they have historically suffered. As of 2019, 8.910.526 victims of the armed conflict have been reported, of which 47.89% are women and people with diverse sexual orientation. They have been victims of forced displacement, femicide, threats, forced disappearance, loss of property, terrorist acts, attacks, fighting, harassment and sexual violence. However, women also played an active role as combatants during the conflict. Thus, of the 74,860 demobilized combatants of illegal armed groups between 2001 and 2019, 11.098 were women.

Given the gendered impacts of the armed conflict, the project FORPAZ, which is EU co-financed and part of GIZ’s Peacebuilding Support Programme ProPaz, has applied a gender perspective to strengthening local and regional peacebuilding capacities and women’s voices and agency as active members of the peace and reconstruction process.

Gender – a quality of our work

The project supports the National Network of Development and Peace Programmes – REDPRODEPAZ in its efforts to promote peace in the 7 regions (45 municipalities) prioritized in the post-conflict framework due to high occurrences of violence. To reflect the diversity of these 7 regions, the project uses intersectional analyses and applies a gender and ethnic approach to its work with Afro-descendant, indigenous and rural communities.

Key elements to ensuring the integration of a gender perspective are listening to community members and women in particular, multi-stakeholder dialogues, joint planning, monitoring and evaluation. Hence, 4 out 9 project indicators include a gender dimension and are evaluated periodically both quantitatively and qualitatively. The project’s steering committee provides a space for the EU, government counterparts, REDPRODEPAZ and other partners to provide strategic guidance on how best to apply the gender approach. In addition, FORPAZ has created a common space with partner organizations at regional and local level, to identify lessons learnt, track results and adjust and further improve the gender approach taken.

Through capacity building 1.085 rural women were empowered to participate in designing rural development programmes (PDET) and implementation of the peace agreement in the department of Magdalena Medio.

“For us, peace means a way of life, in a world without violence and without discrimination. This means moving freely and safely through the territories we inhabit; starting with our bodies.” Peace Agenda for the Women of Cauca

FORPAZ enabled 120 indigenous women of the Indigenous Regional Council of Cauca (CRIC) to develop mobile schools and self-protection plans and agendas for their communities, amongst other things.

Finally, the ProPaz gender group promotes gender issues, helps to identify good practices and provides room for exchange and peer learning within the organization.  ProPaz is developing a guide for measuring the impact of its gender activities, including the work of FORPAZ, and documentation of best practices.