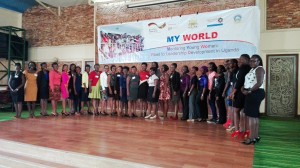 Many of Uganda’s developmental issues can be traced back to underlying Gender inequalities. Over half of married women report to have experienced violence by their partner. Internationally Uganda has the highest percentage of women (40%) and men (36%) who agree that wife beating is acceptable.

Another alarming statistic is that 90% of Ugandan women report to have been sexually harassed at their workplace by male seniors. Lesbian, Gay, Bisexual, Transgender and Intersex (LGBTI) people face discrimination, with over 90% of Ugandans in favour of laws restricting their rights.

With that in mind, GIZ Uganda mainstreams gender in all its activities, targeting both beneficiaries, partners and staff. Specifically for its staff, GIZ offers a comprehensive workplace program that addresses gender justice and gender equality, HIV, health & well-being and disability inclusion. The workplace program aims at raising awareness and building the capacity of GIZ employees, in order to help them both in their personal and professional life.

Gender – A quality feature of our work

For both internal and external implementation of the “GIZ Uganda Workplace Programme” Uganda established a Mainstreaming Task Team (MTT) and a full-time mainstreaming advisor position. Each development program implemented by GIZ Uganda has appointed a MTT focal person. The MTT believes that ‘where there’s a will; there’s a way’ and determinedly continues to create the change they want to see.

To be successful in their work the MTT receives and facilitates trainings on topics such as harmful gender norms, roles and responsibilities of Gender Focal Persons, gender mainstreaming in GIZ, gender inequalities at the work place and the GIZ Safeguards+Gender Management System. Other gender-related activities are: Development and implementation of a sexual harassment policy; mentorship program for young female GIZ staff; establishment of a breast-feeding/resting room; monthly talks/engagements on gender related topics like menopause, human rights of LGBTI, gender-based violence, women’s land rights, writing a will, healthy relationships, effective communication, sexual harassment, anger management, parenthood and many more.

Additionally, gender-relevant information is disseminated through flyers, posters, stickers, information boards, quizzes and a newsletter. A survey conducted by GIZ in nine African countries in late 2017 found that our staff have a positive attitude towards gender equity and reject gender-based violence. 80% of them report to have neither experienced nor heard of any form of harassment at the workplace and 70% would be comfortable to work with a person from the LGBTI community. These numbers show stark differences compared to those in the general population.

The full information can be downloaded. (in English)  2018 EN GenderAward RollUp Uganda Mainstreaming

The competition entry can be downloaded. (In English) 2018 EN Project Documentation Internal Gender Mainstreaming And Implementation Of GIZ Gender Strategy In GIZ Uganda Where There Is A Will There Is A Way