Gender as a cross-cutting topic in Pakistan

German development cooperation has been engaged in Pakistan for more than 50 years. Pakistan currently represents one of the biggest portfolios of GIZ worldwide. According to the country strategy of the Federal Ministry for Economic Development and Cooperation, the three focus areas in Pakistan are sustainable economic development, energy and good governance. With ten running projects, one of them a high volume project engaged in all Provinces of the country, and more than 360 staff, GIZ has a remarkable outreach.
Gender is a cross-cutting issue throughout the portfolio of GIZ Pakistan. Although gender-related topics have so far never made it to the level of a focus area in the country strategy, this is more than just a lip-service. Most projects are categorized as GG-1 and have gender-related issues mirrored at least in outputs and indicators at output level or higher.
However, gender-mainstreaming faces numerous challenges in Pakistan. Pakistan is signatory of over 25 international laws, agreements, and conventions related to the rights of women and has seen progress in the area of national legislation in this regard. Nevertheless, Pakistan’s score on the Gender Gap Index (GGI) has shown no remarkable improvements still ranking behind Bangladesh and India. According to the Social
Institutions and Gender Index (SIGI) which scores and ranks non-OECD countries with regard to societal practices and legal norms, Pakistan is a country with an overall high level of gender discrimination in its social institutions and an alarming “very high” for sub-indicators such as son bias and women’s lack of protection from legal mandates (family code).
The status of women and other marginalized groups in the country is rooted in social structures and attitudes that prevent the realization of their full potential and their due place in society. Cultural practices and misconstrued religious beliefs often collude, restricting even the realization of their basic human rights. The principle barrier in the way of gender equality is the societal perception of women as lower status dependents, borne out of a patriarchal mindset, reinforced by customary practices and institutionalized further by unfavorable and discriminatory laws in the country.
This means a high level of resistance towards gender equality throughout all areas of activity of GIZ. Gender equality is far from being an accepted norm in Pakistan, especially in rural areas and traditional strata of society which form the overwhelming majority in Pakistan. GIZ has to pursue a very cautious and culturally sensitive approach when it comes to raising issues of gender equality, often walking a thin line even among its own national staff.

The Gender Focal Person (GFP) group of GIZ Pakistan is the guardian of gender-mainstreaming at portfolio level and reaches out into the projects. All projects are represented with at least one GFP who supports the principal advisor in promoting and supporting gender mainstreaming in their respective programmes, and we are particularly content with the fact that two thirds of the GFP are male national personnel. The group meets four to five times a year and convenes extraordinary meetings in demand. Besides mutual updates on on-going gender-related activities, the GFP group offers support with regard to all mainstreaming needs from providing a pool of expert consultants, conceptual support to projects, providing guidelines to contributing to induction events for new personnel. Moreover, the GFP group organizes specific campaigns and events with gender-related topics (e.g. screenplays with subsequent moderated discussion on gender-related documentary films by Pakistani documentary film makers) or contributes as a group to corporate events.
It was against this background that the GFP group decided to submit its internal support campaign for the civil society driven “Pink Ribbon” project on awareness raising for the risks of breast cancer as a contribution to the GIZ gender prize 2018.

The “Pink Ribbon” Campaign in Pakistan 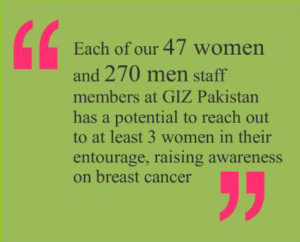 In Pakistan, every 9th woman is at high risk of being diagnosed with breast cancer at some stage of their life, and almost 40,000 women in the country are estimated to lose their lives every year to this disease. Early detection can lead to a better outlook for women including increased survival rates, however stigmas attached to the disease and lack of information about the topic contribute to late detection often when it is too late.
In October 2017, the month internationally celebrated for Breast Cancer Awareness, the symbols of solidarity with women suffering from the disease could be seen in the country’s capital, where landmarks such as the Parliament House or the big Faisal Mosque in Islamabad were illuminated with
pink lights as part of a national breast cancer awareness drive. This so-called “Pink Ribbon” campaign Pakistan was designed to pull breast cancer out of the taboo zone and raise awareness on prevention, early detection and increased access to treatment, in order to reduce breast cancer mortality in the country.
The “Pink Ribbon” project in Pakistan is led by the Women’s Empowerment Group and supported through contributions by public philanthropy as well as a large number of volunteers all over the country. Despite such efforts, breast cancer remains a sensitive topic in the country, which contributes to the lack of awareness about symptoms of the disease and also negatively contributes to health seeking behavior in this regard.
This is why the GFP group of GIZ Pakistan sought to support this campaign and spread its message to its own staff. Although a taboo in Pakistani society, it was assessed that the topic of women’s health is both of crucial importance and affects the entire staff and their families. By addressing our staff, we were able to reach out to a multiplied number of associated spouses and joint family members. At the same time the topic did not run the risk of meeting major resentments or of hurting anybody’s feelings as long as the modes of presenting it were in line with cultural norms of propriety. Moreover, the internal campaign built on and referred to the public civil society campaign, thereby strengthening its effect and putting our own activities in a larger context. 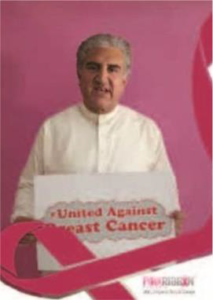 The GFP group devised a chain of measures in order to reach out to their staff in support of the “Pink Ribbon” project:

The “Pink Ribbon” project was contacted to receive information material regarding breast cancer, including risk factors, early detection measures and guidelines on frequency and age of screening. The “Prink Ribbon” project shared newsletters, posters and brochures.

The health insurance provider for national personnel of GIZ Pakistan was contacted to find out about the policy on breast cancer screening tools (such as mammography). The information received in this regard stated that mammography is covered under the health insurance policy, given they are prescribed by a doctor. Without a referral however, they are not covered.

The GFP group took this information to the GIZ National Personnel Representative Committee (NPRC) to highlight the significance of regular mammography inspections and to inform about the reimbursement options of any such expenses through the health insurance. The NPRC committed to promote female colleagues as well as female dependents of male colleague at GIZ Pakistan in cases of a suspicion or outbreak of breast cancer.

Based on the information received from the “Pink Ribbon” project, relevant information has been extracted and formulated into an email which was sent as an information to all GIZ Pakistan staff to kick off the GIZ Pakistan breast cancer awareness week.

Posters were put up on notice boards and the symbolic looped pink ribbon was worn by the GFPs during the awareness raising. GIZ employees who were interested in supporting the cause were also encouraged to wear the pink ribbons. At the end of the week, employees wearing the pink ribbons were asked to come together for a photo.

For the coming year, the GFPs are already looking into whether information material/campaigns are available on cancer/ diseases that particularly affect males. 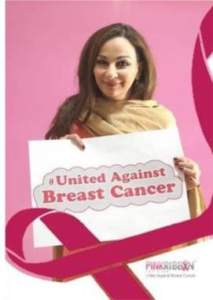