At first thought, few would dare to associate taxation with beauty. But the two can be combined as evidenced by the collaboration of Punjab Revenue Authority (PRA), one of the Revenue Authorities in Pakistan, and the GIZ in the Beauty industry in Punjab province.

The Beauty Salon Industry is abundantly spread throughout the province of Punjab, particularly in larger cities like Lahore and Faisalabad. Beauty Salons provide a variety of different services such as haircut, manicure, pedicure, bridal make-up and allied services. Beauty Salons are liable to pay the Sales Tax on Services as per second schedule of the Punjab Sales Tax on Services Act 2012. The more exciting fact is that this sector is dominated by female entrepreneurs whereas almost all other sectors in Pakistan are dominated by males.
Until recently, the Beauty Salon industry has remained largely untouched by the Punjab Revenue Authority. Recognizing the large revenue potential in the sector, it was decided under the GIZ’s Good Governance Programme in Pakistan having GG1 marker, to devise a strategy to support the smooth inclusion of this service into the tax net. One of the measures was to organize awareness events for this sector in the cities of Lahore and Faisalabad.
These awareness workshops conducted by PRA and GIZ brought together important players in the Beauty industry and provided a platform for them to be educated about their obligations to comply with the Sales Tax on Services Act. It also included sessions for Salon owners to learn how to register with the PRA, to file returns and calculate the correct amount of Sales Tax. Finally, it provided a platform for Salon owners to engage with PRA officers (government officers) to ask question and raise their concerns thus promoting state-citizens dialogue.

The first workshop took place in Lahore in June 2016. It was attended by a number of eminent female figures in the metropolitan who are also engaged in the Beauty industry. The chief guest was also a female politician, the Honourable Finance Minister of Punjab, Dr. Aisha Ghous Pasha. It was a taxation workshop where the majority of participants were women, which is indeed a worldwide rarity!
A second workshop took place in Faisalabad in August 2016 where the chief guests were two female members of the Provincial Assembly.
The Beauty Salon awareness events generated huge media coverage as evidenced by the dozens of newspaper articles in addition to TV segments and significant social media buzz.

Escalating Numerical Results:
The comparative analysis of the Beauty Salons Sector showing state figures regarding registration and tax revenue collections is shown in the table and charts below:

The number of registered taxpayers has increased from Tax Year 2015 to Tax Year 2017 by 137% and the revenue collections increased by 330% since the GIZ’s innovative measure.
The current number of registered beauty salons is only a fraction of all beauty salons running in Pakistan. So, continuing conducting these awareness workshops for the Beauty Salons Sector in other cities will definitely contribute towards better tax administration through enhancement in tax base and increased tax revenue collection.

1st Hair & Beauty Salons Association Formed in Pakistan:
As a result of this initiative, the Salons industry has also successfully established their first hair and salon association for taxation which is set to meet with senior PRA officials on a regular basis serving as the first ever platform to voice out and resolve their issues directly with the Government Authorities, thus, bridging the gap between the state and citizens.
Recently this association filed a representation before the Punjab Revenue Authority to sympathetically consider the beauty services sector’s plea for reducing the rate of sales tax on hair and beauty parlours to around 5 percent. After a series of meetings to figure out a workable option, it was also mutually resolved that the proposed reduction in the sales tax rate would be admissible for only those who opt for invoice monitoring system which will be installed on their business premises for monitoring the sales invoices on real time basis. 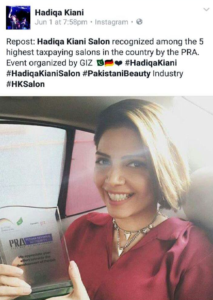 Beauty Salons Invoice Monitoring System (BIMS) Developed & Launched:
Punjab Revenue Authority in collaboration with Punjab Information Technology Board has also developed a Beauty Salons Invoice Monitoring System (BIMS), which is a web based monitoring tool enabling real time capturing and monitoring of invoices issued by the salons to ensure proper declaration of Punjab sales tax on services collected for promoting Sales Tax Compliance in the Beauty Salons industry.
BIMS has been launched by PRA in the event “Tax Clinic for Beauty Salons” conducted by GIZ in Lahore on September 29, 2017. The chief guest, Finance Minister Punjab, said during her speech that the PRA had received good response from beauty salon entrepreneurs who came forward for receiving facilitation and appreciated GIZ’s innovative measure which promotes positive tax culture. She urged women participants to play their responsible role towards taxable income and join ‘tax clinic’ for diagnosis of their problems and its reform measures. Up till now 130 female entrepreneurs were trained in our collaborative workshops having remarkable revenue results, consequently other provinces of Pakistan also decided to replicate this effective measure in their cities to achieve similar notable results.

Pakistan is an enormously diverse, multiethnic and multicultural society characterized by uneven development and distribution of resources. There are massive inequalities along social strata, regions, religions, gender and urban-rural manifestations. By international comparison, Pakistan is one of the countries with the highest rate of inequality between males and females. In the 2015 Global Gender Gap Report, the country reached only the penultimate place of 145 evaluated countries, which is a continuous deterioration in recent years.
Since Beauty Salon operators are mostly female entrepreneurs therefore giving consideration to women empowerment makes our work more effective in yielding more sustainable results specifically in reducing the high rate of gender inequality. This measure has also contributed towards ‘GIZ’s Gender Strategy’ of promoting gender equality and women empowerment through educating female entrepreneurs in particular and fostering a culture of compliance among them.

It’s time for people to appreciate the true beauty of taxation!

Selected Pictures of our Workshops in Lahore & Faisalabad: 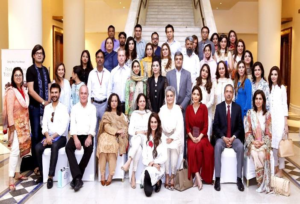 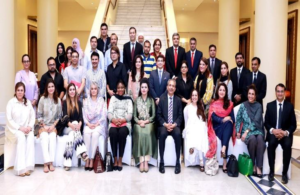 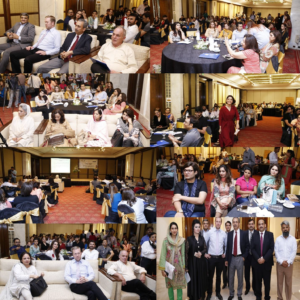