BY JULIA MAKOKHA
In Sub-Saharan Africa, the lack of access to clean cook stoves and fuels for cooking is especially acute. In rural areas in particular, rural poor cook their daily meals over open fires and inefficient stoves. Exposure to smoke from traditional cook stoves and open fires causes almost 4 million deaths annually worldwide, with 16,000 affected, mostly women and young children, in Kenya alone. While women play a highly important role in agricultural production, they are also responsible for activities such as collective fuel wood, cooking and feeding their families. They find themselves in difficult circumstances with very limited or no access to improved technology and information. Women perform their overwhelming reproductive roles such as cooking in rudimentary and inefficient ways of cooking on the three stone, having to carry up to 20kg of fuel wood an average of 5 km a day. 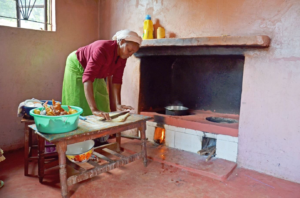 Promoting Gender Equality
GIZ Energising Development Kenya Country Programme (EnDev-K) is bilateral programme implemented jointly by GIZ and Kenya Ministry of Energy. The objective of the project is to increase access to modern cooking and lighting Energy in Rural Kenya. The project has a national office headed by Programme Manager assisted by 9 technical officers. The project works in 20 counties grouped under three Clusters each run by one technical officer. In total the technical team is composed of four men and six women. Below the clusters at
implementation level, the project has no staff but works through collaborators and private
entrepreneurs. The objective of the project is to facilitate increased production and use of
improved firewood stoves and solar systems. The improved stove and solar systems are
gender equity empowering and improving lives at the bottom of the pyramid (BOP) in other
words targeting those living below a dollar per day. Improved firewood stoves are aimed at
easing workload, saving on time and energy. The stoves and solar systems improve working
environment of women who are the majority of cooks, by reducing exposures to indoor air
pollution. Solar systems provide good, affordable and accessible light for children to study
thereby increasing education access to those not connected to national grid.
Most people in rural areas especially women have low education levels, rural women lack
access to skills that can enable them engage in any skilled work so most of them can only
engage in casual labour. By promoting commercialization at the grassroots levels the project
has therefore been able to create employment at the BOP. During project implementation
deliberate affirmative actions have been taken to reach out to ensuring gender equity that is
equal men, women and youth participation in all capacity development activities. This has led
to ensuring men, women and youth are all doing stoves and solar as a business. To ensure
effective participation of women as they fulfil their family Obligations non-residential
trainings at the village level. This is as shown by figures below. Academic barriers have been
removed in selection criteria and training language and context is simplified for easy
understanding. EnDev Kenya in collaboration with the Ministry of Public Health and
Sanitation to sensitize households on the importance of having well ventilated kitchens for
better health for women and children who spent more time in the kitchen. 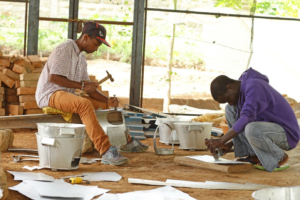 GENDER AS A QUALITY FEATURES OF WORK.
EnDev-K success increasing stoves adoption Kenya is highly recognised in both public and
private domain. The empowerment of stove entrepreneurs into a national Association has no
match in the Kenya. This is confirmed by the fact that the Improved Stoves Association
(ISAK) formed by our entrepreneurs is now highly recognised by all national and local
initiatives as a key player and stakeholder and participant in most decision making boards
such as, Kenya bureau of standard(KEBS), Kenya private sector Alliance (KEPSA), Energy
Regulatory Commission (ERC) and the Clean Cook stoves Association of Kenya (CCAK)

which is the Global Alliance for Clean Cook stoves (GACC) Kenya chapter, Kenya
Generating Company (Kengen)Ministry of Public Health and Sanitation the Ministry of
Energy. Due to same success and through a competitive process EnDev-K and SNV were
selected as the coordinating partners for GACC in Kenya.
EnDev-K won the 2011 PCIA International Award on clean cook stoves technology.
EnDev Kenya has also been key in promoting sustainability approaches through business
skills training for stoves and solar Last Mile Entrepreneurs thus leading to formation of Self
Help groups like Patanisho Youth Group for solar with branches in Busia and Kakamega
counties, Western Energy Trainer that have branches in Bungoma, Kakamega,Uasin Gishu
and Busia these social services. The DFID –funded Results Based Financing (RBF) initiative
started in 2014; GIZ EnDev Kenya provides incentives to financial institutions for
distributors of solar products in rural areas, to encourage the provision of affordable and
flexible financing schemes for small solar system such as solar loans or pay as you go model,
for stoves it is implemented by SNV.
To strengthen gender activities at EnDev K, the programme carried out a gender study to act
as a gender guide for programme implementation.

COOPERATION
Many partners and collaborators have entered into MOU with EnDev-K to replicate this
successful approach in for their clients e.g. APHI PLUS, KTDA, BAT, PALWECO, Yes
Youth Can and Alliance One. Following enactment of Kenya constitution 2010 and
implementation of the same through devolved system of Governance through the Counties,
EnDev-K has developed County stoves implementation Strategies with other stakeholders in
respective Counties. This are implemented by all stakeholders each taking responsibilities
where they have comparative advantage in a win-win arrangement where everybody achieves
more. This has enabled EnDev-K to leverage on Existing structures for great achievement.
The collaboration is documented through Stoves Value Chain Maps, Upgrading Strategies
and work plans shared by all players.

Gender and RBM
EnDev-K together with stakeholders developed a results chain that has been guiding the
implementation of the project. This was meant to link project objectives, impacts and the
millennium development Goals. Some Results have been incorporated in the matrix as
highlighted in bold italic format. 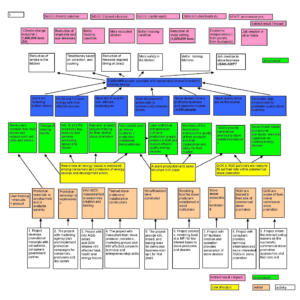